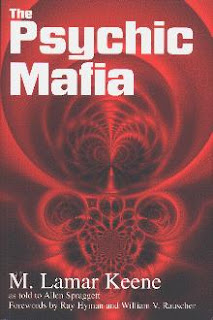 The Psychic Mafia is a book written by the famous American psychic and trance medium M Lamar Keene in 1976. It is an autobiographical “whistle-blower” story confessing his secret life as a fake medium. The book is out of print and used copies are very expensive, but an individual in the Netherlands calling himself “The Anonymous Typist” has taken it upon himself to reproduce the entire text into an e-book which he sends free-of-charge to anyone who asks for it. He states on his site: http://www.skepsis.nl/mafia.html that he intends no harm in breaching copyright, but he considers the book’s message too important to keep back. He says that if a new edition is ever published he will withdraw his distribution of the free e-book. I recommend to all HPANWO readers that you contact the “Anonymous Typist” and read the book as well as, and preferably before, reading my review of it. He answers promptly and courteously, enclosing the book in a series of attached ASC files. The text can be copied-and-pasted into a Word document if you prefer.

The Psychic Mafia follows Keene’s life as man who trained as a medium with good intentions, but soon became seduced by the home truths of his particular psychic institution: that trickery was far more lucrative than honest clairvoyance. He describes the methods used by fake mediums, from cold-reading and psychology to secret trapdoors, stagecraft and special effects at seances. He even employed spies to do research into his client’s backgrounds so that he could give information to them that would sound as if it came from the Spiritworld. Despite all this, Keene stood by his assertion that real psychic powers exist. It’s just that he personally and professionally didn’t use them. Keene suffered an attempted-murder soon after his book was published. Some claim that he was targeted by fake mediums in revenge; similar claims have been made about Harry Houdini.

My first impression of the book was that it read like a kind of Betty Shine meets Trance-Formation of America. The revelations within seemed almost too fantastic to be true; and I’m not a newcomer to Skeptic literature. I don’t doubt that these kinds of things go on. I know that fake mediums do operate and I’m glad this book has revealed some of their secret methods. There’s only one problem: the activities and ceremonies described by Keene have absolutely nothing in common, in any way, with anything resembling the Spiritualism I’m involved in. This Hogarth collection of low-lifes, black matriarchs, psychotics, occultists and emotional vampires are as alien to me as they probably are to you.

My Spiritualist church bears no resemblance to any location described in the book. It is not a religious place of worship in the same way as a regular church is. I think people call it a “church” because in earlier days something had to have that word in its name to avoid being closed down as a “den of heresy”, especially during less tolerant ages (Spiritualism did NOT begin with the Fox sisters; theirs is merely a tacky modern reproduction of an ancient and ubiquitous phenomenon that has always been a part of human existence). There are no formal ceremonies in our Spiritualist services, short of singing a few hymns. There’s usually a reading, not from some dogmatic religious scripture, but from anything with a spiritual theme. Sometimes it’s a Hindu proverb, a Gnostic poem, a Native American proverb, a meaningful joke even! Then the medium will begin channeling. The word “medium” is rarely used in my church; usually it is substituted by the word “speaker”, and that’s a good word because all he or she does is speak. There are no trumpets, no chiffon, no silk tableaux, no message cards, no manifestations, no sealed envelopes, no ectoplasm. I have never seen psychics at my church use any kind of prop whatsoever!... And yes, the church is always well-lit during the service. As for the idea of mediums having sex with sitters: it is absolutely unthinkable! Any medium who tried it would be blacklisted!

Afterwards we sing another hymn and there’s a whip-round with the collection bag. The amount of money collected usually only just covers the mediums petrol tank or train ticket. Mediums do charge forty to fifty pounds for a private sitting, but at churches, where they do most of their work, they earn next to nothing. In fact one of the world’s most famous mediums today, Gordon Smith, refuses to take any money at all and, until recently, has lived entirely off his day-job: running a barbers shop in Glasgow. Most Spiritualists are working-class and their average age is in the later fifties. Many will be on pensions or benefits; they are not the kind of people who can write thousand dollar cheques, however vehemently some discarnate relative demands it. The church is run by a committee of volunteers, a handful of local elderly couples. The building I hear is actually is a converted Scout hut, about 20 feet square, (there’s another group in my hometown that cannot afford any premises of its own and has to hire a function room at a community centre) and I doubt there would be room for any hidden trapdoors or secret storage vaults with a database on everyone who goes in there, even if the same people attended every week. The services at my church end with a blessing and then we gather round with a cup of tea and have a discussion on any and all things spiritual, my favorite port of the evening. This is also a time when the medium will do hands-on healing, always without charging. The churches in The Psychic Mafia are far bigger and grander than anything I’m used to. There is no hierarchy in my church, or any other church I’ve heard of; nobody is a “queen” or “prince”, there are no suited ushers, no grand design features.

I have never been to “Camp Chesterfield” or any other institution like it. As far as I know such places don’t exist today. I’ve never seen anything like them advertised. I’ve been to a seance once only and it was a very sordid and uninspiring affair, carried out by a self-professed “medium” who never does the church circuit. Most Spiritualists attend seances at some point, usually when they’re new to Spiritualism and curious to experiment and learn, but few that I know of do such things regularly. And seances never take place at my church; the one I went to was at someone’s house. What’s more I’ve never even seen a Ouija Board in my life, let alone used one!

One of the biggest differences between M Lamar Keene’s and my own experience of Spiritualism is the sitters themselves. The people I know at church are some of the most active-minded, intelligent individuals you could ask to meet; they are nothing like the vulnerable, grief-stricken, neurotic dupes whom Keene used to exploit and plunder. Most church members are well-read and have a sound general knowledge base. Many, along with me, attend separate discussion meetings on the paranormal. We’ve occasionally had Skeptics join us and they’ve been made very welcome, not kicked out like Keene’s challengers were. They’ve often asked very searching questions to the medium and started a very spirited talk. People who attend Spiritualist churches are not brainless saps; they are as capable as anyone else.

I wonder if the Skeptic movement has perhaps made an unfair generalization here. What do Skeptics mean by “Spiritualism”? What range of beliefs and philosophies does the term cover? If you mean it to refer to Keene’s brand of showmanship, then I’m certainly not a believer in that! What’s more I’m very glad someone has written a book to lay it open for the farce that it is! But this kind of thing is not Spiritualism as I define it, and I don’t think it’s fair to tar my Spiritualism with the same brush. In the last few pages of the book I got the impression that Keene was aware of this too. He discourages people from getting involved in any kind of Spiritualism because of his own experiences, but if he’d ever visited a Spiritualist church like mine he might have changed his mind… pity he didn’t.

All in all, I’m glad I read this book. I recommend it to anyone. However the situations in the book bear no resemblance to my experience of Spiritualism and give me no reason to suspect that such Spiritualism is fake.

I don't think that one should charge for services of this kind.
The best psychics I've ever met were free, and I didn't go for a reading, they just suddenly started talking, freeform.
I went to see Doris Stokes once. Love to know how she did it.

I don't think there's anything wrong earning a living from your psychic skills so long as your honest in your business. Most mediums I know are not very well-off, many have day-jobs. They care about the well-being of their clients. Any that don't quickly achieve their deserved reputation!

Psychics vary enormously in the quality of their abilities. I can go to a dozen church meetings and hear only vague and unimpressive clairvoyance. But every now and again, just once in a while, you get to witness true clear and lucid spirit contact.

I've worked as an astrologer and feel very ambivalent about charging for it. But at the same time it annoys me when people try to get free readings. It takes alot of time to do a chart and analyse it. I'd rather swap a service.
Psychic ability though is different. I think there is something wrong with charging for it. It becomes impure. It's a gift and one shouldn't charge for gifts.

In the end the customer will decide. There are some very gifted psychics who work gratis; they will prevail over those that insist on charging.

I'm very drawn to your idea of barter though. Different people with different gifts can compliment each other without the burden of a debilitating currency. If it works it will revolutionize the way we do business, both within the psychic community and beyond.

This is good site to spent time on. allergy Read a useful article about tramadol tramadol

It's actually a nice and helpful piece of information. I'm satisfied that you simply shared this helpful info with us.

Please stay us up to date like this. Thanks for sharing.

Need To Increase Your ClickBank Banner Traffic And Commissions?