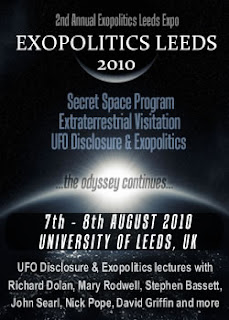 I’ve just come back from a lovely weekend at the 2nd Annual Exopolitics Expo in Leeds. I had a great time and met some wonderful people. The speakers were brilliant. I really like them. And I want to stay in touch with them and exchange ideas. I’ve not had time to do a full written report, but here’s a HPANWO TV reportage I shot: http://hpanwo-tv.blogspot.com/2010/08/2nd-annual-expolitics-expo-leeds-2010.html

I do feel I differ from most of the people in the Disclosure Movement though. This is because I am convinced that willing Disclosure can never happen. Steve Bassett and Richard Dolan spoke about the “scandal” of what would happen after Disclosure (“AD”, the title of Richard’s new book) and it’s obvious they’ve thought it through very hard, but they’re missing something important. I go into this in some detail in my film Freikraft, see: http://hpanwo-tv.blogspot.com/2009/09/freikraft.html . Of course on one level, that of the “less elite” Elite, it’s about money. Of course if we go up to the chairman of Royal Dutch Shell and say: “Sorry, your services are no longer required” he’s going to give us a two-word-two-syllable reply. But at the highest level, the Illuminati level, money doesn’t come into it. It’s about pure, occult power (The two are different, believe it or not). Steven Bassett gave us a run-down of how he thinks Disclosure will happen: “It’ll happen on a Friday evening, to cushion the blow to the stock market and ensure maximum viewing figures. The news will end and the newsreader will say: ‘Please stand by for an emergency broadcast from the Oval Office by the President of the United States’ and Obama will come on the screen and say something along the lines of: ‘My fellow Americans, UFO’s are real. We’ve known about it for almost a century and we have successfully developed Free Energy from studying their power and propulsion systems... but we forgot to tell you. Sorry!’” I don’t think so! There are some secrets that are too big to ever reveal; and this one is the biggest, even bigger than 9/11. To give it away would destroy society because society does not have the structures in it to asssimilate this information; it's been designed that way deliberately. The NWO would be over; thousands of years of the "Great Work of Ages" down the toilet? No way! This is how I think Disclosure will go: It’ll take place during the final endgame between humanity and the Illuminati, probably quite late in that game. When Area 51 is deserted we’ll all drive up Groom Lake Road unhindered and find the place empty. Then we’ll break into the basement with oxy-acetylene cutters and only then will we find out what is really there. That will be the Disclosure; in my view the only Disclosure possible.

(Sorry I’ve been so quiet online lately. I’ve been moving house and my Internet connection will not be up for a week or so.)

Hey so I was reading about male enhancement pills and other shit, found this pretty awesome blog here:

What do you think of this stuff?

Thanks for your excellent video blog of this conference, most informative. One thing that concerns me about the Exopolitics UK movement..... Of late there seems to be a hard commercial element creeping in to everything they do. I thought the prices for this conference were outrageous... more than twice last years Liverpool event, (which I did attend), an additional £29.00 to watch a video of John Searle which is probably already available in extract form on Youtube anyway.... and have you seen the price they want to charge us for the presentation DVDs... £175 for the boxed set... seems to me someone is attempting to make some real money here. What was your impression of this having attended? Do you feel you got your monies worth?

When you consider that one can get into the Oxford Odeon for a mere £7.59 I really thought that the Searl film's fee was very excessive. I realize that it's a movie premier and I'd expect to pay something extra, but not that much!

Apart from the Searl movie, which I couldn't afford, all in all I felt that I did get my money's worth from the Exopol conference overall. Exopolitics is getting very commercial though, especially the way it's producing icon's, stars and debutantes. Some of the moviement's most famous names are manifestly fond of the celebrity lifestyle that they've been led into, deliberately I think, to wine-and-dine them into becoming controlled opposition. See: http://hpanwo-tv.blogspot.com/2010/01/year-ago-dr-stephen-greer-of-disclosure.html

Hello all, how is everybody?

Hello this is Emma did we meet at the conference?

Hi Emma. Were you at Exopol in Leeds? I saw your gallery there.

This won't succeed in actual fact, that is what I believe.