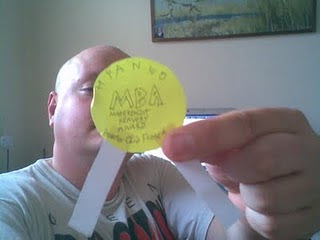 I’ve recently been wondering what the ultimate expression of MBA could be; and if it existed, how could I decorate the select few who make it? Super MBA? MBA Platinum? MBA Gold and Bar? I’ve never complied a full list of MBA-Holders, and I’m coming across new ones every day, but there are currently two known Gold Laureates, Chris French and Susan Blackmore. Now how could they go any higher? How can you improve of perfection?

I expect that most HPANWO-readers are familiar by now with what the Materialist Bravery Award is. Just in case you’re not I’ll explain. The MBA emerged out of the perennial and intriguing question of what happens to a person when they die. Do we just stop existing when our body does? Or is there an Afterlife of some kind; heaven, hell etc? The mindset behind MBA is that in fact the former is definitely correct and that the latter is a delusion generated from human awareness of mortality. It is simply and nothing more wishful-thinking. People who believe in it do so as a psychological safety-net to protect them from the unwelcome truth that when they die they’ll cease to exist. You’re dead forever, you no longer exist and never will again. The reason people believe in Life-After-Death, according to the Skeptic Movement and most scientists, is simply because the prospect of ceasing to exist is unbearable and so humanity has concocted a mental safety-net to survive psychologically. A person is awarded an MBA when they have demonstrated the courage, fortitude and general superiority-over-others to live their lives successfully without that comfort blanket. The basic criteria for being awarded an MBA are: 1. To disbelieve in any form of Life-After-Death and accept the fact that when you die you’re consciousness will end permanently. 2. To be aware of the reasons why other people do believe in such a myth. If you meet the requirements of those two criteria then please contact me immediately because you have just qualified for the MBA Bronze! To upgrade to the far more prestigious MBA Silver it is necessary to go beyond a mere acceptance of Criteria 1; it is necessary to make it a central tenet and cornerstone of your philosophy. An MBA Silver applicant will be expected to tell everybody he or she meets that they believe in Criteria 1. Anybody who doesn’t mention it at least once a day cannot be considered for an upgrade to Silver. Another way to impress the Silver Awards Committee is to state your views on Criteria 1 in the published media, like Prof Marcus du Sautoy did here: http://hpanwo-tv.blogspot.com/2011/02/bbc-horizon-mba-city.html . The requirements for MBA Silver also relate to Criteria 2. As I said above, anyone hoping to be decorated with MBA Bronze must understand the reason why non-MBA-ers believe in an Afterlife, but to progress to Silver an applicant must actively and sincerely regard Afterlife-believers as his or her social inferiors. He or she must pass an initiation in which they commit a verbal or physical act of violence and contempt on “Jellies”, and they must use that word! Every applicant will be carefully monitored and carefully screened to make sure they’re not just acting up for the Silver Awards Committee. So it’s no use just turning up on the day and putting on a charade; the Committee will deploy spies to observe you in your everyday life for at least 3 weeks before making a full report! They will follow you wherever you go, read your emails, intercept your post and listen in on your phonecalls! Then, only if the report is favourable, do you stand a chance of attaining MBA Silver. Now, MBA Gold… my God! How do I describe MBA Gold? To attain MBA Gold is a state of self-glory and self-divinity almost beyond the capabilities of human language to describe. All I can is say that a Gold Laureate is as far above a Silver Laureate as a Silver is above the lowest Jelly. That’s right; imagine the massive, yawning gulch between a MBA Silver-holder and the dirtiest, most pathetic and quivering, Spiritualist Church-attending, Tarot Card-reading Peter Fenwick-supporting Jelly! That’s the distance between a Silver and Gold MBA-er! As I said above, only two people, the Superhuman Man-Gods Chris French and Susan Blackmore, have ever achieved this pinnacle of MBA-ism. But does your MBA Career necessarily have to stop there? Is there a degree even above MBA Gold?

I think there is, and I call it the Deathbed MBA. This is where somebody who knows that they’re about to die expresses an MBA-ist opinion as one of their last actions on Earth. Any Deathbed MBA-er is automatically granted the MBA Silver, if by an unforgivable oversight they’ve not been decorated with it up till then, and goes down in history forever as one of the champions of MBA Culture. A special memorial is built for them in the MBA Museum and every year on the anniversary of their death all MBA Laureates are called to observe a moment’s silence on their knees with their heads bowed. I’ve only been able to award two people with the Deathbed MBA so far. One is a very famous case, that of the great Scottish philosopher David Hume. Hume was lying on his deathbed in August 1776 when he was visited by his Jelly friend James Boswell who tried to persuade Hume to accept God into his life before it was too late and therefore go to Heaven. “Mr Hume, doesn’t the thought of annihilation make you uneasy?” was Boswell’s mystical-scumbag question (The Jelly bastard! How dare he even breathe the same air as an MBA Laureate like Hume!?). The conversation was good-natured, but Hume refused to submit. He told Boswell that it would be a “most unreasonable fancy” to think that he had any kind of Afterlife waiting for him. Here is a dramatic reconstruction of the event: http://www.youtube.com/watch?v=dmimr-NVRKI . The second Deathbed MBA Award is from the demise of the famous cricket commentator and Caribbean political activist CLR James. His final days were recorded by his friend Christopher Hitchens in Hitchens’ recent autobiography Hitch 22. Hitchens, who also holds the MBA Bronze himself, made a light-hearted comment about what he’d do in the Hereafter; Hector knew Hitchens’ views on the Afterlife and so must have understood that his friend was joking, but he raised his head and gave Hitchens a withering glare. “I don’t believe in the Hereafter!” he said.

So there you have it: Two Utterly Superior God-Men who go down in history as Deathbed MBA’s. May they Not Rest in Peace because they had what it takes to know that there is nothing to rest in!

By the way, my own personal view is that there probably is an Afterlife. This opinion is based on my research into the subject, EG: http://hpanwo.blogspot.com/2008/09/michael-dimercurio-and-kevin-warwick.html . However I’m not making any excuses; I’m still a Jelly and I can’t escape it!

I'm sure that Susan Blackmore is a wonderful woman, but her TV persona, as a research scientist wheeled out to provide the "rational" refutation to any mystic or believer in the occult, always makes me angry. She may well be correct that it is all hokum, but it is the duty of an honest, sceptical scientist to remain neutral, evaluate the evidence, and propose a hypothesis. It is not their duty to come across as an arrogant, convinced skeptic with a smug grin and a superior pre-held negative attitude to everything non-material.

Hi John. Thanks for your comment. I'm glad you understand my sense of humour! I might have added in the film, although it wouldn't relaly have been fair, that Susan Blackmore has carved a healthy niche for herself as "Rent-a-Skeptic" (Her own term). I met her last year at TAM London and she seemed OK. See my review of the event: http://hpanwo.blogspot.com/2010/10/tam-london-2010.html

Very useful material, thank you for the article.