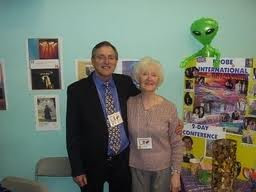 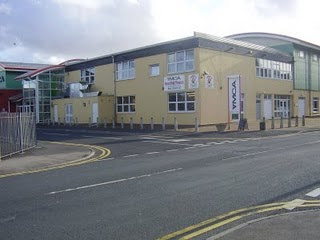 Here’s my HPANWO TV reportage of the UK Probe Conference October 2011 which contains a lot more details as well as exclusive Probe footage. As always at the present time I've not done a full-length written report on this event: http://hpanwo-tv.blogspot.com/2011/10/uk-probe-conference-2011.html

This October 2011 Probe Conference was unique in several ways. The conference is always held close to the Equinox and so tends to be in March and October. At that time of year the Lancashire coast tends to be either mildly sunny and warm or windy and wet. However this weekend the weather has been unprecedented for its heat and sunshine. Temperatures have risen up into the high 80’s all over southern Britain. It was as if Probe had been moved to the summer, and a very hot summer for that matter. I’ve never seen anything like it! Predictably the British public was quick to take advantage of the situation and the train from Preston to Blackpool was a cattle-truck. I was dismayed to see that the police had installed airport-style metal-detectors at the gates of Preston Station. If you look at my previous Probe report, see: http://hpanwo-tv.blogspot.com/2011/03/uk-probe-conference-march-2011.html , you’ll see that Preston Station holds a special place in my heart. Luckily on the way home these scanners were gone, clearly a temporary attribute to remind the people that we shouldn’t get too comfortable and relaxed. Don’t we realize how much in danger we are from terrorists under our deckchairs?

This conference was also unique in that Ustane was not with me. She’s busy at work and so couldn’t take the time off to come along. She’s been accompanying me to Probe since 2008 and I missed her a lot. However I met up with a lot of my old friends and made some new ones. I’ve had an offer from somebody to attend a skywatch at their friend’s estate where apparently there’s a Close Encounter of the First and Second Kind almost every night! I also met up with a lovely family who have a sweet, little 2 or 3 year old girl who reminds me of my own daughter when she was that age; rather than the hostile, rebellious, hefty 16-year old that she is today. They are regulars at the Sauniere Society Conference. I’ve realized that this is one I’ve yet to attend and should do so really, see: http://sauniere-society.org/

I feel a major change has come over the way I see the Probe Conference; not that I’m going off it, not at all. However there’s one major element of the Conference I’m going to have to break away from to prevent the event from being stripped of a lot of its enjoyment, that’s the Carlton Hotel. Along with breaking away from something I broke towards something else! I became an official cameraman for the last session of the Conference, Dex Dobie’s speech, see: http://www.dexdobie.com/ . Dex asked me to film his speech and gave me this very heavy and elaborate recording rig which he strapped to my torso ceremoniously. It had two separate cameras on it and a boom microphone. Unfortunately when Dex began his speech I realized that one of the cameras had plenty of film and a battery that was nearly flat and for the other it was vice versa! The cameras were different makes and so the two were incompatible. I tried putting one of my own film chips into the one with a full battery, but it prompted me to format the chip and so would erase all the film I’d taken myself. In the end when both Dex’ cameras were spent I switched to my own Sony. I don’t know how I managed it, but I was able to record the entire speech, minus a few moments here and there for panicked battery and film fiddling. The end of Dex' address came with about 2 minutes of battery left! It was recorded on 3 different cameras, on two chips and one disk using three different batteries. Half of it is with Dex and half with me; so in short it’s an editor’s nightmare! Good luck with it, Dex!

By the time I left the conference on Monday morning the weather had changed back to its usual rainy and damp autumnal ways, but when I descended from the train in Oxford Station the heat hit me as if I’d just got off a plane at a tropical airport. The more southern and eastern parts of Britain have been granted an extra day of this Indian Summer. Make the most of it! I’ve had a great time at Probe; thanks to Sam and all the other organizers. Unfortunately Jean couldn’t join us this time because she’s not been well. I ask all HPANWO-readers to sends her their best wishes and healing energy. Pray that she’ll make a swift recovery and be back in the driving seat at Probe soon.

One thing that disappointed me deeply was that on Saturday morning a mysterious alien appeared in the Conference auditorium and walked around trying to communicate with the people there… but I overslept and turned up late so I missed it!

Pretty effective info, thanks so much for this article.

Start following our trades today and earn up to 270% a day.