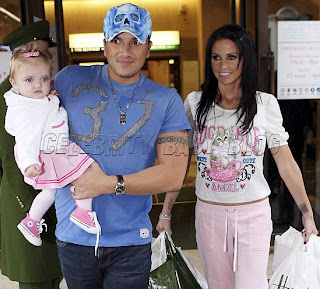 I’ve recently written here about the fake Blue Peter phone-in ( http://hpanwo.blogspot.com/2007/10/fake-blue-peter-phone-in.html ). It’s almost too incredible to believe that such and audacious and subterfuge is going on, but it gets worse, far worse! The notion that Peter Andre and Katie Price, aka Jordan, are not a real couple is rife today, and that’s encouraging because it means people are suspicious of the Conformist Regime’s media and don’t swallow it whole and unquestioned.

Jordan is what has become known as a “glamour model”, a conventionally attractive woman who has mildly erotic pictures and films made of her for the Conformist media, rather like a Japanese gravure idol, but with other celebrity activities on the side. Peter Andre was a 90’s pop star and media-promoted CMI (Conformist Male Ideal) for a very short time before falling into total obscurity. In a recent TV interview Jordan was asked about the conspiracy theories surrounding her and Peter and she replied: “We’ve got our third kid now; how long will it be before these people accept that we’re a real couple?” I myself don’t doubt that they are a real couple today, after all they live together and have two children, plus Harvey, an adopted boy from Jordan’s previous partner Dwight Yorke; what I dispute is how their relationship began in the first place.

They met in a most unusual and sensational manner. They were both contestants on the Reality TV show I’m a Celebrity- Get Me Out of Here! I’ve been interested in Reality TV for a while and I’ve become convinced that it is actually government mind control and Conformist propaganda, but that’s a long story that needs its own post. Peter and Jordan were total strangers when they arrived at the show’s location. Almost immediately they were holding hands and cuddling. The two became the subject of nationwide gossip and Jordan’s current casual beau traveled all the way from Britain to the show’s location in Australia to invade the set and “punch Peter’s lights out.”. In her 2004 autobiography, Being Jordan, Jordan describes how she and Peter were instantly smitten. Here I suspect she is lying. One of the most important things Reality TV needs to be successful and keep the viewers watching is conflict and confrontation among the contestants or some kind of crisis or scandal. Nobody will bother tuning in to see ten people getting along like a house on fire! Viewing figures soar when things “go wrong”. I put these words in quotes because it’s not a case of “going wrong” it’s one of “going right”. The producers very much want these incidents to break out… so much so that I doubt if they’d leave the prospect of one doing so to chance. I think that the coming together of Peter and Jordan was staged.

As I watched the two strolling round the jungle hand-in-hand I recalled a similar incident in the first series involving the actor Darren Day and “it girl” Tara Palmer-Tomkinson. The two had an affair on-set. Darren’s’ girlfriend was interviewed on GMTV about what she thought and I was amazed at how unperturbed she sounded. Then it struck me: the whole thing was a set-up! Darren and Tara were only pretending to be lovers and Darren’s girlfriend was in on it. The same staged incident was arranged for Peter and Jordan and Jordan’s current boyfriend (and I dare say Peter’s partner too, if he had one) was briefed in. There was something very insincere and forced about Peter and Jordan’s on-screen petting. Jordan’s boyfriend’s anger also looked very fake as he stepped off the plane in Australia. Whatever other talents they might have they are definitely not actors. What the show’s producers, and I dare say Jordan’s boyfriend, never counted on was Peter and Jordan falling in love for real after the TV show was finished! They’re a real couple now; it’s beyond doubt. They live together and go everywhere together and have children. Personally I wish them all the best.

The fakery and stagecraft on TV is of a depth and scale that is almost beyond belief. So-called documentaries and real life are as scripted and designed as much as any movie, drama or soap opera. TV producers can make films of people reading scripts and acting out preassigned roles and characters; and then go ahead and present it to the viewing public as a factual record of true life. There is no law that prevents them from doing this. Sometimes their machinations are exposed, as with Blue Peter and Family Confidential, but how much else do they get away with? What proportion of their chicanery slips through the net? The two examples I gave could be the tip of a huge and very sinister iceberg. If TV producers are presenting fictional material as fact and news then how can we trust them to tell us the truth about anything?
Posted by Ben Emlyn-Jones at 13:59

Ellis mentioned you were after my e-mail address: bc.fairhall@gmail.com.

By the way, on the subject of TV scams, take a look at the latest:

Thanks for getting back to me. The reason I wanted to email you was to do with that lady Jenny who came to Probe. She told us she'd written a book about Reptilians and I got the impression it was "Bodysnatchers" with the cover art by Neil Hague. But actually "Bodysnatchers'" author is called Susan Reed. Is this the same person as Jenny? I still want a copy anyway!

Thanks for the link, but I'll have to look at it another day because it's blocked by the computer I'm using (at work. Naughty! naughty!) My own PC is, to use a technical term, completely buggered. Hopefully it will be fixed soon and I'll be back online.

If you want your ex-girlfriend or ex-boyfriend to come crawling back to you on their knees (no matter why you broke up) you must watch this video
right away...

(VIDEO) Get your ex back with TEXT messages?