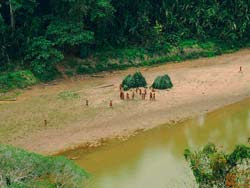 In my novel Rockall, which you can read for free on Ben's Bookcase (See the links column) I describe how people land on an unexplored island and find that it has a hitherto unknown native human population, a Stone Age culture called "ErkDwaLa". I began to wonder if this scenario could ever come true in the real world. Well it has! It’s generally assumed that the human exploration of the Earth is complete; that in this day and age we’ve traveled over every square inch of our planet’s land and there are no places that “civilized” man has never set foot. That’s a fallacy. Vast areas of this world have never been walked on by explorers and have only been mapped in recent years by satellite; in Africa, Siberia, North America, New Guinea and particularly the Amazon. Massive areas of this vast forest have remained hidden from the rest of the world. Recently a plane flew over a very remote area and found people living there! The photo shows a traditional Indian village, of the type all Amazonians used to live in before they were “civilized” by Western Conquistadors. The astonished residents are staring up at the aircraft. What is going through their heads is unimaginable! Imagine you’d lived your whole life in a tribal culture in the woods and knew nothing of the world beyond it. What would you think if you saw an aeroplane for the first time? What would you think if you saw people of a different race for the first time? Would you even identify them as human beings like yourself? How I feel about this matter is summed up by what Kayleigh says to Zach in my book:

“Are you OK?” asked Zach.
She nodded mournfully.
“It’s great when a baby’s born, isn’t it? I’ve often wondered what it’d be like to have a kid.”
“Yeah.” she sighed. “It’s always been the same for the ErkDwaLa, you know. Everyone’s been born and raised in that cave the same way; even Old Kerroj’s great-granddad’s great-granddad. I bet it hasn’t changed for thousands of years.”
“I suppose not. Why does that make you sad?”
She swung round in her seat and looked at him. “I’m just wondering what things will be like for Keesa’s baby when he’s old enough to become a father himself.”
“What do you mean?”
“Their world is about to meet ours, Zach. We can’t stop it. The next generation of ErkDwaLa will have to contend with that; and I’m afraid for them.”
There was a long pause. “So, what happens now?” asked Zach as he started the engine and put the Jaguar into gear.
“Nothing.”
“What do you mean nothing? We have to tell people about this.”
“No we don’t; and we’re not going to.”
“But the world has a right to know!”
“The world has no such right! Our modern society is built upon the broken lives of people like the ErkDwaLa! Dill told me!”
“That was centuries ago! And Dill’s a crank! Kayleigh, we can’t keep this a secret! You said it yourself; their world will eventually meet ours.”
“We can keep it a secret and we will! You will because you swore an oath to me that you would!” She rubbed her eyes and took on a calmer tone. “We will let the world know, eventually; but you’ve got to leave that to me. I’m going to let Dill in on it. I’ve got a feeling he suspects anyway; he knows the in-country better than anyone. We’ll contact someone who can help; maybe the United Nations.”
“Kayleigh, those people live in a filthy hole in the ground, even little kids! Nobody should have to endure that in this day and age! Why don’t we just go back there now and lead them all to Rockall Port, to civilization?”
She shook her head. “You don’t get it, do you?... To them we’re like aliens who’ve just landed from another planet. Until a couple of years ago they didn’t even know we existed. For them there is no outside world! This island and the sea as far as the horizon is all they know! They call it ‘Arkdwa’, but that word translates as ‘Rockall’, ‘World’ or ‘Universe’.”
“That’s all the more reason to widen their view of life; show them the rest of the world.”
“Show them what? A skyscraper hundreds of feet tall? An aeroplane? A computer? An ocean liner big enough to carry the entire ErkDwaLa population ten times over? Cities of a million people? Continents of a billion?... The technology, scale and diversity of the planet Earth would overwhelm them! The culture-shock would destroy their minds!... Zach, these people MUST be protected!”

The region where these Indians live is being opened up to the outside world. For the people who live there, I dread to think what will happen. They’re going to experience something very similar to what the whole world experiences in the novel War of the Worlds by HG Wells. Kayleigh is right; to them we are an empire from another galaxy descending on their defenseless little world. Logging companies will eventually try to take over and wipe out the very jungle that has been the core of their environment. The people will be exposed to our technology and it will seem like magic to them. They’ll be shown a world of proportions and diversity beyond their capacity to understand. They’ll experience Western vices of alcohol, drugs, money and modern hi-tech warfare. They’ll pick up diseases that their immune systems have never had to face before. As Kayleigh says, they MUST be protected.

This happened just last year in New Guinea too, my brother told me. An Australian expedition found a tribe of people. The first question the tribesmen asked the expedition, translated by their native guides, was "Why have you painted﻿ yourself white?" I'm concerned for these people. Will they survive psychologically being introduced to the wider world with its technology,﻿ diversity and strangeness? What must it must be like for them. A bit like an alien invasion of planet Earth! They HAVE to be protected!

For the time being, they should be left well alone. Maybe in the future, when we have a kinder and more peaceful and respectful world, we can go out and make contact with them. Then we can exchange ideas on a one-to-one basis. Interaction between our culture and theirs is not necessarily a bad thing, so long as it is carefully controlled and the needs of the recipients made a top priority. Let this interaction with modern culture be on a one-to-one basis instead of an exercise in aggressive conformism!
Posted by Ben Emlyn-Jones at 14:35

Modern culture is conform or be rejected.

Look around you, walk through Oxford, look at their eyes, how they walk.

You are ,looking at a defeated people, a people whos will is swayed as easy as a blade of grass in a tempest by those in power.

I hope these native amazonians never have to have a meeting with the desperate, greedy, power mad degenerates we have become.

I know what you mean. I'm proud to be a human being in the sense that humans are naturally a gentle and cooperative species. The thing is, the civilization we live in is NOT natural. It is an artificially-engineered abberation! It is a circus or zoo and we are the performing elephants who wear pom-poms and tassles and walk about on two legs during shows; and spend the rest of our time in a cage banging our head against the bars with pain and frustration.

Perfoming elephants dressed in pom-poms.... Well, if there ever was an apt descirption of health service staff and their ridiculous burdens of paper work....

In the NHS you sometimes feel as if you ARE the pom-pom!

Drop into your forum. I've started some thoughts for discussion.

Throw in some ideas and we will use it to bounce ideas off each other.

There's a chance you're qualified for a complimentary $1,000 Amazon Gift Card.

Start following our signals right now and profit up to 270% a day.