AI and the New Human 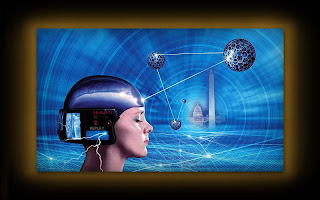 I watched this vid last night. It's a real-life horror movie: http://video.google.com/videoplay?docid=-610941801601994601&q=bbc+horizon+human&ei=7qhLSOOEHYfcjALA9t3SDA&hl=eN
As I said in the DIY Stem Cells article immediately below, science suppresses so much that could make the world a better place, and at the same time are happy to spend billions on things that could enslave and destroy our lives. They're developing artificial intelligence while unpicking the workings of the brain. Put the two together and you have the ultimate psychotronic weapon. The vid briefly mentions DARPA and MK ULTRA almost as an amusing aside without understanding the potential for abuse this technology has. This is typical of Horizon’s intractable establishment bias! (I’ve written about it before: http://hpanwo.blogspot.com/2007/12/more-horizon-doomsday-mongering.html
http://hpanwo.blogspot.com/2007/12/convenient-lie.html )


Our mind is the last bastion of freedom, the keep in the fortress of our liberty. Up till now the government have found ways to monitor what we say and do, what we read, write and watch on TV, but our thoughts, dreams and feelings were still our own and nobody else’s, but sadly no longer. Over the last 100 years science has discovered a lot about how the brain works; the functions of the various organs inside it, like the hypothalamus and the temporal lobe etc. Now, using a PET scanner, it is possible to know the kinds of things we’re thinking about by watching the various electrical neural pathways in the brain light up. They can’t read our every thought in detail… yet… but they do know what kinds of things we’re thinking about. I saw a news report a few months ago about a PET scanner that can act at a distance which is being designed for use in airport security. The sensitivity of the machine is good enough to detect it if someone is mentally preparing themselves to commit a violent attack or terrorist plot. “Oh good!” say the Conformists “It will keep us safe from the terrorists.” That’s what they want us to think! That’s how they justify the employment of these unholy contraptions!

You can bet that in secret government laboratories like Porton Down and Fort Detrick, this line of research is far more advanced than what we see in this vid. The ultimate goal is to turn the human brain into another computer, without independent thoughts and feelings at all, a compliant and obedient as your own Windows XP suite. This is not a “conspiracy theory”, it’s a fact. Projects to do these things are documented in mainstream history. MK ULTRA took place in the 50’s and 60’s and it is the continuation of research done in Nazi Germany by Josef Mengele. The name of the project contains a tribute to its origins. MK stands for Mind Kontrolle. Kontrolle is German for “control”. Many of the subjects took part without their informed consent. They were given LSD and other drugs, subjected to hypnosis, sleep-loss and sensory deprivation. The CIA oversaw the project because they understood that they could create the prefect assassin, the “Manchurian Candidate”. But it cannot have escaped their understanding that the potential for this technology went much further: it could be used by the government to mentally control the entire population.
I dare say many HPANWO-readers are shocked and disturbed by this Horizon episode and by what I’ve just written, but it’s not my intention to give you nightmares. I’m not trying to breed despondency and despair. But it is better to know. If you think this knowledge is scary, try ignorance! It is only through our ignorance that the Illuminati-controlled governments get away with shit like this! Once we know what they’re planning to do to us then all we have to do is, to quote the anti-drugs campaign, “Just Say ‘No’!”. In a way it’s encouraging that they’re going to such extremes to preserve their power! This is because their power is falling apart and they know it! They’re simply desperate! This plot of theirs will not work because there is a part of us that their tentacles can’t reach: our spirit, soul or sense of humanity. Recent research has shown that there is an essence of our consciousness that lies beyond the brain, in the very workings of the universe itself. This is what will put an end to this fuckin' shit and set us free. Our consciousness is changing; it is getting stronger. To quote the Zulu Shaman Credo Mutwa (More about him later): “A God is being born in all of us.”
Posted by Ben Emlyn-Jones at 11:05