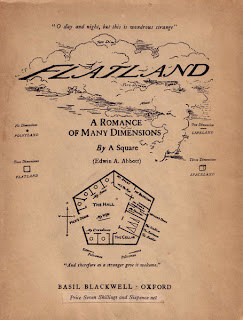 Flatland is a fantasy novella by Edwin A. Abbott written in 1884. To this day it remains the most comprehensive and explicit piece of written description to explain the concept of physical dimensions. To this day it is revered to by physicists and employed by them as a must-read in instructing their students. Because of its age it is now out of copyright (The author died in 1926 so in accordance with copyright law, his copyright expired on the 70th anniversary of his death: in 1996. However his “moral rights” apply forever so if you copy and paste the book you must make sure to identify Abbott as the author.) and available free online in many locations. I recommend one of the texts with the original illustrations like this one: http://www.geom.uiuc.edu/~banchoff/Flatland/ . If you’re a traditionalist like me, and enjoy the feel of real paper in your hands, the book can be purchased very cheaply, but there’s a new edition just published that acts as a companion to the new film of the book: http://www.amazon.co.uk/Flatland-Journey-Many-Dimensions-Movie/dp/0691136572/ref=sr_1_7?ie=UTF8&s=books&qid=1222364026&sr=1-7 The language of the book is the Victorian literary dialect which takes getting used to, but it’s worth it. Two animated films based on the book were made in 2007, completely independently, in one of the many “coincidences” that occur in the artistic world. But this short Dr Quantum clip from the extended edition of What The Bleep Do We Know!? is a faithful and stylish synopsis of the story: http://uk.youtube.com/watch?v=BWyTxCsIXE4 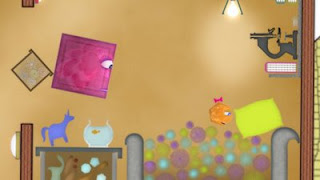 The story takes place in an imaginary universe, one that like our own has nurtured complex matter, structures, life and intelligence. The big difference is that it is a universe of only 2 dimensions instead of 3. They have length and breadth, but not height. This is why it is called “flat”. To our eyes it would look like a flat sheet as thin as thin can be. In fact it is more than thin; it's thickness measurement is Zero, in any unit you like. But to the beings who live there, it is the whole world as they know it and in the same way that our minds cannot conceive of a world with more dimensions than 3, theirs cannot contemplate one with more dimensions than 2. The idea of solid objects would be beyond their understanding. The first part of the book describes the country in which the protagonist and narrator, called Square, lives. The beings all take the form of geometric shapes and their shape determines their role in their society. It becomes immediately apparent that Square’s nation is a very unpleasant one; authoritarian, dogmatic, snobbish, racist, male chauvinistic, although Square expresses no objection to that and takes it for granted. The caste system of the society runs thus: the lowliest sector are the women who are very thin parallelograms, virtually straight lines. Then come the male serf class, isosceles triangles; the longer their hypotenuse the higher their status until it matches the other two sides and they join the next caste up: the equilateral triangles. The squares are the teachers, scientists, lawyers and judges and include the protagonist; and the highest strata of all are the circles that mostly form the Priesthood. Part of the religion of the nation is the banning of any talk of higher dimensions, as the little circle in the Dr Quantum clip explains. The narrator nonchalantly describes horrific acts of social violence, for instance if an isosceles couple give birth to an equilateral baby, the child is taken from them and adopted into an equilateral family. Also some beings undergo painful and damaging cosmetic surgery to alter their shape into one of higher status. It is a wonderful satire of Abbott’s own Victorian society, and also the perennial human condition of Conformism which is as relevant today as it was in his lifetime.

The second part of the book describes the narrator’s experiences in the story: One day Square is sitting at home in his house when a mysterious circle materializes in the middle of the lounge. It’s a ghostly individual who keeps changing size! In fact it is a sphere called Sphere! A 3D object that can only appear as a cross-section, a circle as it intersects Flatland, just like Dr Quantum’s finger. The sphere tries to explain what he is, but Square is totally befuddled, even when the sphere touches the inside of Square’s stomach and shows Square objects from inside a locked cupboard, like Dr Quantum does to the little circle. The interesting thing is that Square himself had a dream the previous night about visiting a realm called “Lineland” which consisted of only a single dimension and having an identical conversation with the King of Lineland, just stepped down a dimension! The sphere eventually resorts to pulling Square out of Flatland altogether and showing him Sphere’s own 3D world. Square’s reaction is utter disbelief and astonishment transforming to wonder and revelation that Abbott very skillfully and imaginatively describes. The overwhelmed Square looks down on his own world from… above!… and sees the solid objects of Sphere’s 3D universe. He then begs to learn more. He urges Sphere to show him 4 and even 5 dimensional universes. This is the most interesting part of the book because at this point Sphere balks. He acts exactly like the ignorant Flatlanders when they want to discuss 3 dimensions! It turns out that Sphere who at first seems so omniscient and God-like is actually no more enlightened or wise than anyone else; he simply has a better view! Square is returned home and the story ends with him being imprisoned as a madman and heretic as punishment for his ravings about a 3D world.

Flatland is a parable of our own world. We may live in, not a 2D, but a 3D universe and can’t comprehend anything greater than that, but we have the same attitude to the 4 dimensional as the Flatlanders have to the 3 dimensional. What’s more, thinking and talking about worlds dimensionally greater than our own has been criminalized in the past and is still stigmatized in much of human society. There are people, sages, Shamans, soothsayers and other mystics who have had experiences very like Square’s and they’ve been persecuted, especially in modern Western culture. There’s an interesting scene in the book where Square is looking down into a sub-rosa Synod meeting in Flatland with its most senior priests. The doors have been locked and the public kept away, but of course this is no obstacle to Square while he’s in the company of Sphere. In the scene the Elite circles of the church admit that there probably are higher dimensional plains, but they can’t let the masses know that because it would weaken the power of the Elite! So they violently suppress it. This is what I believe is true in the real world. Genuine spirituality is either denied by mainstream science or subverted into the cul-de-sac of organized religion. This is why David Icke calls organized religion and mainstream science “opposames”. They’re portrayed and conventionally thought of as opposites, but they’re actually the same thing.

This is why I’m delighted when I see movies like What The Bleep... And read new books about Shamanism. The world is entering a spiritual renaissance and this is the biggest threat to the power of the Illuminati Elite. It’s important to take part in this because as Dr Quantum says: “You’d have to become it to know”. Imagine if all the flat shapes in Flatland joined Square on his tour of the 3 dimensional! The power of the circular priests would fall apart like gossamer!

Here’s another related video where the ingenious Carl Sagan illustrates the themes of Flatland: http://uk.youtube.com/watch?v=Y9KT4M7kiSw&feature=related
Posted by Ben Emlyn-Jones at 20:24

This is a wonderfully written post about an excellent subject, and I am especially tickled to read this because in exactly one week I will be listening to Fred Alan Wolf (Dr.Quantum)speak at the festival we're planning to attend! Thanks for the sync and the smiles!

Hi Ben
That was most interesting.

Strangely enough, I once had an idea about writing a kids book about just these shapes, yet I don't believe I'd ever heard of this book before.
Always glad to see the topic of conformism brought out into the open - one of the biggest strangleholds we face.

Hi Jenn. Thanks. I'm glad I've inspired you with an apt article for the festival. Hope you get time to read the whole book.

Fred Allan Wolf is great! Long before I saw What The Bleep I read his book The Spiritual Universe.

Hi WW. Go for it! It's something simple yet profound that kids can relate to. Flatland itself ususes rather arcane language, but I'm thinking of writing a transcription.

Hi Ben
The subject on dimensions by Matthew is just what I want to research. I also wanted to know about the two dimensions below our Third. And I had a book by Fred Allan Woolfe, it was 'Paralell Universes'

Fred is a damn good writer. I've read his book "The Spiritual Universe".