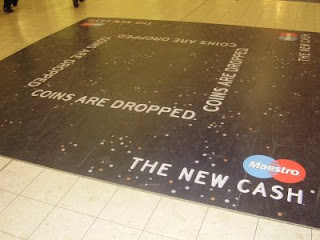 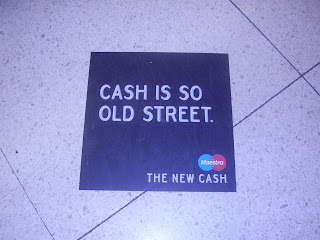 I came across this is Birmingham New Street Station the other day. These giant floor-posters are all over the concourse and pass under the feet of thousands of rail travelers every day. They advertise the Maestro Card (http://www.maestrocard.com/). Its advertising campaign is a nasty, scheming way of introducing the cashless society: using fear to make us comply. “Coins get dropped”. So if you use the Maestro Card you won’t have to worry about losing your money. They also use Con-formist peer-pressure and the engineered desire to be “cool”: “Cash is so Old Street, man. Think of what your friends will say if they see you paying with notes and coins!”

We’ve had cashless societies before. In the 19th Century many mineworkers were not paid any money, they were given "truck tokens" which could only be spent in special shops owned and run by their mine. In Roman times and in many other ancient societies where slavery was accepted and commonplace they had a similar system. A slave was considered the property of their master and received no wages; however a slave-owner had to provide food and accommodation etc for his slave. This would mean a lot of organizational work and shopping etc, so some just used to save themselves the bother by giving the slave tokens and saying "Go and get whatever you need." The slave could then take the tokens to special warehouses and exchange them for goods of his choice.

If we accept a cashless society or even one where our financial transactions are monitored, then we introduce a global truck system. Without cash we no longer choose what we do with our own money, because we have no control over it; and the banking system alone will choose what we buy, when and where we buy it and even if we buy anything at all. A lot of people pay with plastic today, and occasionally the machine at the till will refuse to accept your card. This is not a problem nowadays because we still have the option of paying with cash. What do we do when there is no cash? There’s nothing we can do! The system has complete control over all our financial activity. In the novel Better Than Life, a book based on the ingenious sci-fi comedy series Red Dwarf, Rimmer punishes a man by taking out a court order that stops him from buying Heinz baked beans; instead he has to put up with inferior supermarket brands! This may sound funny, but many a true word is spoken in jest. In the cashless society just such a punishment will become possible. And if the authorities ever get really pissed off with you then all they have to do is turn off your card. Aaron Russo says just this in his famous interview with Alex Jones (http://video.google.com/videoplay?docid=5932575671781803477&ei=sB8MSa2hBYLi2gKjofi-CQ&q=aaron+russo+interview). What would you do then? Nothing! Unable to buy anything at all, including food, you’d quickly starve to death. This is the kind of world we will live in unless we reject the cashless society.
Posted by Ben Emlyn-Jones at 09:05

Geez I used to work for the evil MasterCard bastards, no way they can have anything to do with a cashless society. (Maestro is a MC "product".)

Their motif looks like an astonomers' diagram of an eclipse! What the hell does that mean!? The eclipsing of financial freedom behind the moon's shadow of electronic slavery?

I got the meaning that coins are dropped reminds one of the 'penny drops'.
I wouldn't mind the cashless society if the various agencies controlling money markets wouldn't drop 'trillions'
Coins get dropped but do pennies

Intersesting point of view (as always).

However, there are those that say the a money society (which Carlyle called the "Cash Nexus") de-humanises and even brutalizes all economic exchanges between people.

Accordingly, extinguishing the need for cash can be a prelude to genuine communitarian government.

A truck-token society is not the only outcome of a cashless society.

Ben, spot on! Cashless society, with all this 'supposed' identity theft [right, powers that be providing problem, reaction, solution on that one!] going on they want us to trust their systems? GEEZ Louise!

They want us all reduced to digits.
It's pretty sad, funny thing is, here in the U.S. I get very angry when I pull up to a gas/petrol station where it says "PRE-Pay or use Card". I never use my debit card at all, I always go withdraw all my cash on "pittence day". Your right, its a push to get use to go cashless and reduce it all down to digits.

Yes that's true. Simply having access to cash alone is not a solution to financial imprisonment. The use of a paper Fiat currency is far from perfect, I don't deny!

A barter or gift economy comes to mind as an ideal way to live. There's a good book by EF Schumacher called "Small is Beuatiful" which presents some revolutioinary and, in my view, very progressive economic ideas. It shows how small local businesses could become the mainstay of human economies rather than mega-corporations or local and national government bureaucracies. However one could argue that the book is not really revolutionary because that kind of "decentralized mini-capitalism" is the very economic system that human beings naturally evolved into under in prehistoric times.

However even in those times, at least since farming was invented in the Neolithic Age, people also used tokens of exchange to overcome the limitations of barter. EG: If I were a pig farmer and you ran a barley field I could swap one of my pigs for a hundredweight of your barley, but you wouldn't be able to pay me until the harvest. Therefore you could give me a token to close the deal and remind me to collect.

There's nothing dehumanizing about that, in fact it's very expedient. Money only becomes dehumanizing when it's used as a weapon of power.

Thanks for your comment; I'm going to SitP next week; see you there.

Thanks, mate. I see "card only" retailers do exist in the States. Someone on the David Icke Forum reckoned they hadn't happened yet.#

I know what you mean about making us digits. Have you noticed the way economists and politicians speak: they no longer even call us "people" or "Human beings", they use the loaded, Orwellian term "Consumers". This makes my skin crawl whenever I hear it! I am NOT a consumer!

Yup, I noticed too, they're catch phrases really annoy me fully. They speak in "Corporatease". What bothers me even more is that Corporations have just as many 'right' as a human being thanks to crafty lawyers and judges treating them as if they were a living sentient entity!

You would have laughed if you had seen me watching the documentary "The Corporation". I continuously had to stop it as I was raving mad walking around, gritting my teeth. It was a tough one to watch!

Thanks, Aferrismoon, that's a name to look up.

Michael, that sounds an interesting programme judging by your reaction. That lady doctor I met (the one in my article "Hard Work") has sent me two more books. One called "Unjust Rewards", Polly Toynbee's follow-up and another called "Corporate State" by George Monbiot. I'll let you know what they're like when I've read them.

I notice LETS schemes have even made the plot of "The Archers"!

Follow our signals today and make up to 270% daily.