The Day After Roswell by Col. Philip J. Corso 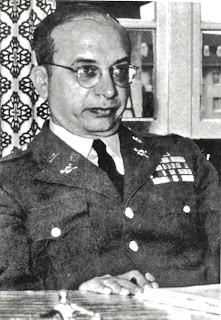 Two of my Probe-Buddies have been trying to persuade me to read this book since I started attending the conference in 2006. It’s often described as a “landmark” and “seminal” book regarding the Roswell Incident. This mystery has been done to death a bit over the years any new information on it is very welcome indeed, so I’m glad I made the decision to buy a copy and read it. It presents a perspective on the Roswell Incident that nobody predicted and that I’d never have imagined.

Lieutenant Colonel Philip Corso was born in the United States to an Italian family in 1915 and joined the Army during World War II where he served as an intelligence officer. After the invasion of Italy and the defeat of Mussolini he worked for the chief of police in Rome using cunning and investigations to expose and arrest Fascist and Communist guerrillas. He quickly developed a very streetwise knowledge of the Roman underground and aided the emigration of thousands of homeless refugees from their squalid camps to proper homes in Italy and abroad. During the Korean War Philip was once again drafted into the role of military intelligence; this time to keep an eye on North Korea’s prisoners of war (a subject that spawned the controversial conspiratorial thriller The Manchurian Candidate by Richard Condon). After the war Philip joined President Eisenhower’s National Security Council and then became a top official at the Pentagon. So you see Lt. Col. Philip Corso cannot be pasted with the classic dreadlocks-and-anorak “UFO nut” stereotype. He was a highly-respected and trusted top government official who brushed shoulders with presidents, ministers, senators and chiefs-of-staff.

The book’s main subject matter covers what happened after 1961 when he became an assistant, and very close friend, of General Arthur Trudeau who was head of the Pentagon’s Research and Development office. At the beginning of the book there’s a chapter on Philip’s personal experience of the events at Roswell in July 1947. At the time he was a Major in charge of security at Fort Riley in Kansas and he encounters wreckage from the Roswell flying disk and even the embalmed body of an alien in boxes left stacked in the corner of a storage shed. This part of the book, I strongly suspect, is contrived to embellish the narrative with drama and shock effect. It seems inconceivable that whoever salvaged and processed the Roswell debris would just leave it lying in a corner of an army base, while they popped to the toilet or something, where any passing sentry could nip over and have a look at it. The same goes for the author’s description of the crash site itself which is fairly nonsensical. According to him the local fire brigade turned up and one of the firemen got to see the alien bodies! However the rest of the story is far more convincing, although I’m not 100% sure about all of it. What happens is that Philip is shown a secret filing cabinet by Gen. Trudeau which contained some of the debris of the Roswell crash with objects that look like wafers with silicon threads in them, super-strength fabric and a kind of torch which shines a concentrated beam of light which can cut through metal. Trudeau then gives Philip his mission: take this technology and find a way to introduce it into mainstream science and industry, so that it enters common use. The US authorities believed that it was pointless to try to keep the Roswell technology secret because of the enormous success of Soviet spies in infiltrating the government to the highest level so the only way to ensure its survival is to proverbially “hide it in plain view”. Philip describes how he has secret meetings with the heads of Bell Labs, Westinghouse, General Electric and many other top engineering organizations to present the Roswell technology to them, in a way that made it look as if it had been invented by ordinary human scientists. The wafer structures were actually electronic circuits which led to the “invention” of the transistor and eventually the microchip; a crucial development that allowed computers and other electronic appliances to massively increase in power while being miniaturized a thousand-fold. The torch-like device was actually a laser and hence the modern use of lasers in everything from a CD player to a National ID Card retina scanner. We can thank the Roswell aliens for that, not human pioneers and innovators! The fabric launched the development of “smart cloth” and super-strong designer building materials like Kevlar and Buckminster-Fullerine. I’m fairly dubious about that part of the book. There’s a clear paper trail showing how scientists from this planet can take credit for these inventions and it feels uncomfortable to think of some green bug-eyes monster from Zeta Reticuli taking the limelight instead! The technology from the Roswell craft, and others that have crashed and been covertly salvaged, has indeed been back-engineered by human scientists, but the technology developed has been selfishly hoarded by the government for its own exclusive use. And it’s not mere trifles like CD-players and portable radios; it’s antigravity, esoteric propulsion systems and I can’t begin to speculate on what else!

However the author then changes tack and comes to the most sensible and convincing part of his story: the development of “Star Wars”. According to Philip the history of the Cold War is a farce, a mere sideline that hid the real conflict: the war to defend Earth from invasion by a hostile extraterrestrial civilization. The West and the Soviet Union’s conflict was real at one level, but was also used by both sides to develop weaponry to attack alien spacecraft; a conflict in which both superpowers were secretly allies. The greatest leaders in this covert war were Ronald Reagan and Mikhail Gorbachev. Their clash over “Star Wars” research was staged for public consumption while the two presidents collaborated to make sure that both their respective nations were armed to the teeth with space-based lasers, missile and particle beam-toting satellites. The book also describes “Project Horizon”, the proposed, but cancelled, plan to put a permanent military base on the moon to defend the Earth from both the Soviets and aliens. I think that the practical problems with the project would have made it impossible with current publicly-available technology, and even sending a handful of people to the moon for a few hours is impossible (See here: http://hpanwo.blogspot.com/2009/01/i-went-to-godamn-moon.html and http://hpanwo.blogspot.com/2008/01/moon.html ). Corso on the other hand believes that the Apollo missions were real and succeeded as history tells us they did. These scenarioes sounds a lot more likely to be true, not least because it is corroborated by the testimony of others. Before I read the book I had already seen the lectures by Dr Carol Rosin where she relates her last interviews with Werner von Braun. Braun emphatically tells her “Carol, you vill stop ze veaponization of space.” (See here: http://www.youtube.com/watch?v=7ALLUuvsVkM and http://www.disclose.tv/action/viewvideo/14187/Dr__Carol_Rosin_Interview__Pt_1_12/ ). According to von Braun the threat of hostile aliens is merely a lie, but the idea that these weapons were constructed ultimately to fight ET’s and not Communists, but only a few people would know, matches Philip Corso’s experience. The only difference is that Philip believes the propaganda about hostile aliens and, if he were alive and working today, would become an unknowing accomplice in the fraud that Carol Rosin talks about (Not just Carol either; Ian Crane mentions it. See here: http://hpanwo.blogspot.com/2008/10/ian-crane-war-on-terra.html ). This is the problem with career-soldiers like Philip Corso; they are invariably naïve when it comes to politics. The ethos of the military is about service, discipline and obedience to authority. I call that being malleable and subservient.

Lt. Col. Philip Corso died in July 1998, one year after the Roswell 50 celebrations, and stuck by his story to his last breath. Towards the end of his life he became very close friends with the Italian UFOlogist and exopolitician Paola Harris (A lady I’ve met, see here: http://hpanwo.blogspot.com/2008/06/now-thats-weird-conference-2008.html ). In fact he virtually adopted her! Here’s one of his last interviews: http://www.metacafe.com/watch/1944228/the_roswell_ufo_crash_case_one_day_with_col_philip_j_corso/ . The Day After Roswell was panned by most book critics and in fact The Guardian included the book in its list of “Top Ten Literary Hoaxes” (Well here’s what I think of critics: http://hpanwo-voice.blogspot.com/2008/06/critics.html . In fact I’m thinking of starting a Facebook group called “Fuck the Critics”!) Worst of all, the author’s former Pentagon colleague Senator Storm Thurmond withdrew his foreword and review when he found out about the book's contents. This is unfair when I’m pretty convinced that some of it at least is true and it was denounced purely because of its outlandish nature.

Aliens are real; the Roswell Incident was real. The US government really did salvage a crashed alien spacecraft from another planet, dimension or existence in July 1947. Philip Corso was in some way involved in that. As a defence expert he saw the UFO’s purely as threats, in fact in no part of the book does he ever consider that they might be anything but hostile. “They” in its singular form, is a big word to use for what might be any number of different species with any number of different origins, and probably with many different natures and agendas. Many in the New Age UFO cults like the Atherius Society and the Raelians worship the ET’s as virtual gods and see them as wholly benevolent (See Richard Lawrence's segment here: http://hpanwo.blogspot.com/2008/04/uk-probe-conference-march-08.html ). They are not all friendly by any means, and they’re certainly not Gods. But it’s equally foolish, as well as making yourself open to manipulation by the politically-motivated Elite, to see them all as enemies.

The cover and title-page verso of the book states that it was written also by William Birnes, the UFO researcher and presenter of UFO Hunters. However, Corso, who narrates the entire story, never refers to his co-author, not even in the acknowledgements.
Posted by Ben Emlyn-Jones at 11:46

One can but try by "exposing the corporate lie". Please check out my blog. Also in Oxford, maybe we should gather and chat.

Hi Mike. Thanks for your comments. Yeah, I'd like to meet up with you. I've seen your own Corporate Lie blog; looks good.

Is Bigfoot Real or fake? For around 400 a long time, there have been reporting’s of a man like beast which is wholly coated in hair.
[url=http://www.is-bigfoot-real.com/]bigfoot sightings[/url]

Hello guys im new on yous forum nice to see you all my website: [url=http://google.com]google[/url]

Did you know that you can earn cash by locking selected areas of your blog / site?
Simply open an account on AdWorkMedia and embed their content locking widget.

Professional trading signals sent to your mobile phone every day.

Hello everyone, If you love building sheds like I do, here's a great site for you to download shed plans: