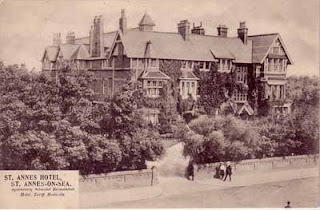 (This is a postcard from Lytham St Annes sent in 1909, 100 years before this conference.)

Friday
Do you ever feel that fate is striving to give you a hard time for some reason? On our journey to the autumn 2009 UK Probe Conference Ustane and I definitely felt that it was. It was the most difficult trip to Lytham St Annes, Lancashire that we’ve ever had. Ustane came to meet me in Oxford and we travelled together. For some reason the train was far busier than usual and we ended up in separate seats. Ustane was sat next to a smartly-dressed middle-aged man, a travelling businessman or managerial type. Ustane took out some papers and began writing. She was working on a Spanish translation of one of David Icke’s free documents; then her fellow traveller looked down at what she was writing and announced: “David Icke!? He’s a nutter!” I overheard him, leaned over and said in a fake cockney accent: “That’s right. And it must be true ‘cos I read it in The Sun.” I found my own mild sarcasm quite cathartic and the man ceased to bother me. Ustane however was deeply urinated off. As we reached Birmingham New Street to change trains we both breathed a sigh of relief. “Thank God we’ve got rid of him.” I said. “He was an ignorant fuckin’ prick!” hissed Ustane furiously. We got onto our train for Preston 20 minutes before it departed and had our pick of the seats. As we settled in a suitcase plopped onto the table in front of us and a cheery voice said: “Surprise surprise! Hello again!” The man from the first train sprawled into the seat opposite. Ustane gaped in dismay and glanced at me. Is he following us? our looks between us asked. But no, he’d actually prebooked that seat! “I’ve got a good book to read.” he chortled. “Bernard Cornwell; a better writer than David Icke!” Ustane stared down at her translation and never said a word for the entire 90 minute leg. As we got off at Preston we almost ran across the bridge to the platform for the Lytham St Annes train. We stopped and looked back as our previous train pulled away from the station. I could just see into the window of the place we were sitting in. “It’s OK.” I said. “He’s still on the train.” It seemed that our negative serendipity had backed off a bit… for now. Not a good start.
Things picked up though. We settled into our lovely hotel room. We were at the Ad Astra this time. I told Ustane that I’d eat my hat if she preferred the Strathmore and luckily my hat remains untouched on my plate. This was my seventh Probe and the third one which we’d attended together. Our spirits began to lift and we looked forward to the weekend ahead.
On our way to dinner at the Salters’ Wharf pub we saw a pigeon sitting in the middle of the pavement. To our surprise it didn’t fly away as we approached. When we got closer we saw that it was badly hurt. One of its eyes had gone and swollen crusty flesh replaced it. “Maybe a cat’s gone for it.” I wondered. “Might have been hit by a car.” said Ustane. Ustane, bless her, immediately took enormous pity on the poor thing and we wondered what we were going to do with it. I knocked on the nearest door, that of the District Club, but they weren’t very helpful. “No I don’t know the number of the RSPCA… and we don’t have a phone book either.” (Slam door) I cursed myself for not writing down the RSPCA’s number when I phoned them a few months ago about a family of hedgehog in my back garden. Luckily a nearby vets was still open otherwise we’d probably have missed our dinner meeting with Jean and Sam. Strangely enough it was only a few weeks ago that Ustane found another injured bird in the street where she lives. We promised ourselves that we’d check on the pigeon’s progress on Monday before we left. We even gave it a provisional name: Walter.
We had a lovely meal in the pub carvery than went over to the Carlton to meet up with our old Probe-buddies. It was an evening of mixed feelings because although many of them were there, like Fred, Val, Ann and others; there were many notable by their absence. This was the first time ever that Dennis “the Orb Man” and Marion weren’t there. Two others, a mother and daughter investigation team, had also missed Probe for the first time in years. Brian Allan had already told me that he couldn’t make it. Ellis Taylor is in Australia; he went over there for a couple of months, but I think that was over a year ago. Matt Delooze and Ben Fairhall were also not there (See links column for Brian’s, Ellis‘, Matt‘s and Ben‘s websites). Still, it was great to be back as always. We went to bed quite early and slept very well.

Saturday
We had our organic Fairtrade breakfast that the Ad Astra is famous for, including what the landlady calls “happy meat” and then we shared a taxi to the venue. The two people in the taxi were both French ladies who’d travelled to Probe specially to see just one of the speakers, Delores Cannon. After more joyful reunions the conference began. I’ve reproduced my interpretation of what they said to the best of my understanding, based on notes I took during their speeches. If any of them are reading this, or anybody else better-informed, and I’ve made some mistakes then I apologize:

Thank you very much for going to the trouble of writing up what in my opinion is a very well composed, well considered review of this autum's probe conference.

I would also like to thank you for making the u tube probe films.
I haven't been able to attend any probe conferences since october 2005, after I became severely disabled and immobile. So watching the films made me feel like I was there. All the people are lovely, not just Jean and Sam, and it's great, like you mentioned in your film of the venue, to be with kindred spirits twice a year, and I'm sure that this is an equally attractive reason for attending with probe-goers as is the actual content of the conference itself.

Yes, Probe conferences always leave me with more questions than answers but perhaps that is their ultimate function, as we have to ask questions to raise our awareness and evolve further, and the answers these seminars reveal just add even more grist to the mill. It can be a colourful celebration of free-thinking if we allow this process priority, rather than to adhere to any particular doctrine or and fall into the trap of thinking inside the little boxes.

In response to the astrology talk review, I've been studying astrology, along with astronomy and the nature of time and space, since I was about 7 years old, precipitated by my own experiences, and i'm not much further on than I was then, (although my technical knowledge has increased since the advent of string theory, holographic universe, and dark matter, etc). But, staying with this quantum theme, the study of astrology often says more about the ideas and preconceptions of the student/proponent than it does about the subject itself, and I am very irritated by the current climate of carte blanche (sub-)cultural acceptance of this subject as a means to define ourselves, and understand others/the world, because I see a lot of idiotic pigeonholing and judgemental thinking going on as well as intelligent assessment.
As it is an art, we should treat it like art, take it or leave it, not as science or with blind acceptance. To present concrete ideas or even conjecture based upon an art form which is open to so much contradictory opinion, is, in my opinion, not helpful to anyone, though it may appear to be.
I think on a personal level, it can provide the autosuggestion of a personality which you will develop, in the same way a religion will wash your brain. Fair enough, but it will also provide a lens through which you will start to view all else/others, and sadly, place these in convenient little boxes, so that they are interpreted accordingly through this filter. I've seen it and experienced it so many times. Certain signs - for example, scorpio - have far more unwarranted kudos than others, which is just idiotic, and again, says more about our own nature and the need to have hierarchies and cool icons to revere than anything else.

I have visited this site and got lots of information than other site visited before a month.

Start following our trades right now & gain up to 270% a day.