Muslim Clerics- Are They Shills? 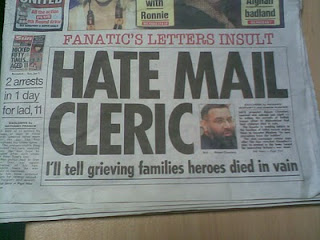 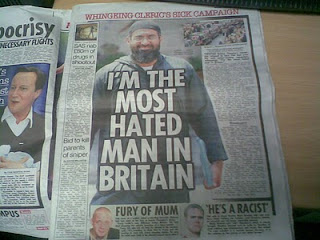 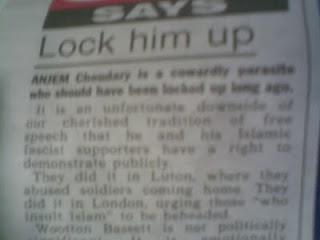 (This article is a follow-on from one I posted yesterday, and I recommend reading that first before this one: http://hpanwo.blogspot.com/2010/01/stop-immigration-world-government-now.html)

The news, especially the tabloid press, has been raving about a proposed anti-war demonstration in the Wiltshire town of Wootton Bassett by the Muslim pressure group Islam4UK (http://www.islam4uk.com/) The town has become an unofficial gathering place for people to show their respects when the bodies of soldiers killed in Afghanistan are flown back home for their funerals. The protestors plan to carry mock-coffins themselves to represent the local Afghan Muslims who’ve fallen in the war. For this reason there are calls for the demonstration to be barred because it is inappropriate. The Sun has been predictably incensed, see: http://www.thesun.co.uk/sol/homepage/news/2791562/Fanatics-plan-march-in-Wootton-Bassett.html . It has featured a front page article on a hard-line Islamic cleric called Anjem Choudrey who has been writing to the families of the dead soldiers telling them that their “sons died in vain”. The Sun calls him “Britain’s Most Hated Man“. This eerily echoes the case of “America’s Most Hated”, see: http://hpanwo.blogspot.com/2008/01/americas-most-hated.html .

Anjem Choudrey? He’s a new name to me, but he’s playing a role that I see repeated identically over and over again, by people with different names. That role is “evil Islamic extremist living in Britain”. There’s a whole list of them: Abu Hamza, Omar Bakri etc… And you never here about him before the man before him in the queue is gone from the scene; it’s as if they take it in turns to be this particular media character. When Anjem Choudrey became the latest… dare I say it?… actor… to play this part. I wonder what the job ad was like when he applied for it:
WANTED
Experienced actor to play the role of an Evil Islamic Cleric in British government propaganda broadcasts and newspaper stories. Must be willing to wear false beards and be able-bodied enough to kneel down in the street. Must be able to take on a sinister-sounding name like “Mohammed Evil Al-Turban” or similar.
Please apply in writing, with full CV, to:
Tony Blair
c/o the Illuminati
666 Babylon Street
New Atlantis
Agharta
Inner Earth
IE12-6JQ

I’m actually only half-joking. Every time one of these goons appears in the headlines the more convinced I am that these so-called “evil Muslims clerics” are paid government shills. You see, the Illuminati-occupied government of the UK want to start a civil war in Britain, a race war. A year or so ago David Icke had a meeting with a traffic warden who had been secretly trained to do routine police duties like arresting people and criminal investigation. The reason he was given when he asked why he was doing this training was that “there’s a war coming, and the police are going to be too busy fighting civil unrest to do their usual job”. Hospital security officers have also been given "pace cards", the powers of arrest and issuing on-the-spot fines. I’m not surprised because I can now see how the ingredients for this coming war are being deliberately mixed together and the fuse is being primed. Why would the government actually want a war; you might think. Well it’s a Divide-and-Rule ploy. When we’re fighting Muslims (Didn’t it used to be the Jews who were the hated scapegoats? Who will it be next; the Buddhists, the Moonies, the Divine Light Missionaries?) we won’t be fighting the Illuminati; it’s that simple. It’s a trick that has been used before. As long as we’re slogging it out with each other we’re controllable because the powers-that-be will be sitting above the fray, pulling the strings of both sides and knowing that while attention is focused on our internal conflict we will be oblivious to our rulers. Along with Problem-Reaction-Solution and Stepping-Stones, Divide-and-Rule is the most popular political manipulation tool in the world. It has kept us in chains since the rise of the Illuminati at the beginning of history. It was for the Divide-and-Rule strategy that King Charles II, and his forbears and successors, organized the Plantation of Ulster in which, over a period of a century, 40,000 Scottish and English Protestants were moved into the land that would later become Northern Ireland and split the indigenous nation of Ireland in two. This has resulted in hatred and carnage that has endured to the present day. The English Kings did not move the Protestants into Ulster and give them privileges over the native Catholic majority because they were “their kind of people”; they did it because they knew that the Catholics would resent it and begin attacking the Protestants. The Protestants would fight back and warfare would ensue. And all this time the English rulers would be able to dominate both sides. The result was that British rule in Ireland persisted for the next 300 years. These Divide-and-Rule ploys will continue to be used on us… until they stop working.

It’s also about Problem-Reaction-Solution too. A civil war will make everyone not directly involved beg the government to intervene and bring it to an end; this will inevitably mean harsher laws: curfews, CCTV vans, martial law etc, like you see in the film V for Vendetta. Policies that would today cause public outrage would be passed through Parliament on the nod, and even be demanded by the populace. Shots have yet to be fired in earnest, but this process has already begun. See the bottom picture, The Sun’s editorial talks of “the unfortunate downside of our cherished tradition free speech”. Solution? End free speech by banning Islam4UK and halting the demonstration. Once it’s been applied to Islam4UK, the foot is in the door for it to be used elsewhere on other people, and eventually on everybody.

Let's just pretend for a moment that Islam4UK is not a fake organization and deal with the banning issues:
I actually agree that to hold the demonstration there during a soldiers’ funeral procession would be deeply inappropriate and cause painful upset for the dead man’s loved ones; and I abhor Choudrey’s practice of writing those letters to the grieving families, but this MI5 agent Choudrey has said that he will make sure that the demonstration will not overlap with one of the funeral ceremonies. It's right to mourn the forces dead, but the truth is that while the fatalities of British servicemen in “Aff-Gann” are virtually smothered in publicity, “HERO” headlines and glorification, the deaths of innocent local people in this war, which outnumber the British military casualties manyfold, are ignored and considered irrelevant by the mainstream media. In many cases these people have been deliberately murdered by British and American forces and nobody gives a damn! Islam4UK wish to redress this balance with their own mock-parade; and I support them in that. They’ve got every right to march through Wootton Bassett on a day free from other activities. I can see that this whole issue is additionally motivated in further promoting the “Cult of the Soldier”, and I’ve written more about that here: http://hpanwo.blogspot.com/2008/07/our-brave-boys.html . In the last Dot Connector magazine, Colin Bondi wrote very eloquently on this subject where he talks about “the symbol of the Negative Warrior”. See: http://www.awakeninthenow.com/
(Addendum 6/1/10): The controlled-opposition, the BNP (qv), is playing its own part in the charade with great aplomb. See here: http://bnp.org.uk/2010/01/bnp-leaders-vow-to-physically-block-islamist-wootton-bassett-march/
(Addendum 13/1/10) The Islam4UK demonstration took place last weekend and was diverted from Wootton Bassett by the police over fears of "public disorder". Nick Griffin and several other BNP officials threatened to block the way physically if it had gone ahead. There are those on the Far Right now calling for Islam4UK to be banned! That's rich considering the various attempts at censorship the Far Right has had to suffer itself! It reminds me of the hysteria in 1950's America and the slogan "Communist Party Be Outlawed!" http://tv.bnp.org.uk/2010/01/bnp-news-islam4uk-to-be-banne/
(Addendum 17/3/10) There is now positive evidence that Islam4UK is a front for British Intelligence, something I long suspected and predicted: http://www.youtube.com/watch?v=063uiVorxNs
Latest HPANWO Voice stories: http://hpanwo-voice.blogspot.com/2010/01/wildcat-bannings-on-david-icke-forum.html
And: http://hpanwo-voice.blogspot.com/2009/12/aint-that-just-typical-after-christmas.html)
Posted by Ben Emlyn-Jones at 20:22

Addendum: The controlled-opposition, the BNP (qv) is playing its own part with aplomb. See here:

Maybe sanity is finally prevailing over official cowardice and political correctness- Islam4UK has been banned.

Well, Chris, I think that's terrible! I'm not a Muslim and don't agree with everything Islam4UK stands for. And I'd hate to live under Sharia Law. But once we withold free speech from one group of people, we effectivly give licence to the authorities to take it away from ALL OF US. It's the foot in the door they seek, the thin end of the wedge.

Also, as I said in the article, this whole affair is far more than what it first seems. It's a government-organized psyop! For the sake of our nation's future, and that of the world, we cannot let ourselves be hoodwinked in to playing the game

"Every time one of these goons appears in the headlines the more convinced I am that these so-called “evil Muslims clerics” are paid government shills."

And it's not even a new thing:

FRANK COLLIN was a major figure in the National Socialist Party of America - until his Jewish heritage was revealed.

DANIEL BURROS, a Jewish American, became the major recruiter for the most violent Klan group that existed - the United Klans of America. When his Jewish identity was made public in a New York Times article, he committed suicide.

There are many more examples.