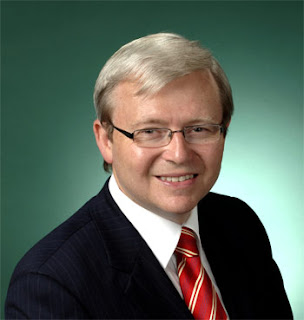 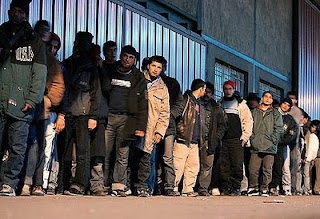 Yesterday I was sent a most remarkable email from a friend of mine who regularly attends the Probe Conference. It was not written by them, but forwarded from an unnamed sender. It was written in large, bold print using several different colours and fonts, and it was entitled: “The Australian Prime Minister Does it Again” and it went like this:

(He's done it again. He sure isn't backing down on his hard line stance, and one has to appreciate his belief in the rights of his native countrymen. A breath of fresh air to see someone lead.)

Australian Prime Minister does it again!! This man should be appointed King of the World. Truer words have never been spoken...

It took a lot of courage for this man to speak what he had to say for the world to hear. The retribution could be phenomenal, but at least he was willing to take a stand on his and Austrillia’s (sic) beliefs.
The Whole World Needs A Leader Like This!
Prime Minister Kevin Rudd - Australia

Muslims who want to live under Islamic Sharia law were told on Wednesday to get out of Australia, as the government targeted radicals in a bid to head off potential terror attacks...

Separately, Rudd angered some Australian Muslims on Wednesday by saying he supported spy agencies monitoring the nation's mosques. Quote:
'IMMIGRANTS, NOT AUSTRALIANS, MUST ADAPT... Take It Or Leave It. I am tired of this nation worrying about whether we are offending some individual or their culture. Since the terrorist attacks on Bali , we have experienced a surge in patriotism by the majority of Australians. '

'This culture has been developed over two centuries of struggles, trials and victories by millions of men and women who have sought freedom.'

'We speak mainly ENGLISH, not Spanish, Lebanese, Arabic, Chinese, Japanese, Russian, or any other language. Therefore, if you wish to become part of our society. Learn the language!'

'Most Australians believe in God. This is not some Christian, right wing, political push, but a fact, because Christian men and women, on Christian principles, founded this nation, and this is clearly documented. It is certainly appropriate to display it on the walls of our schools. If God offends you, then I suggest you consider another part of the world as your new home, because God is part of our culture.'

'We will accept your beliefs, and will not question why. All we ask is that you accept ours, and live in harmony and peaceful enjoyment with us.'

'This is OUR COUNTRY, OUR LAND, and OUR LIFESTYLE, and we will allow you every opportunity to enjoy all this.. But once you are done complaining, whining, and griping about Our Flag, Our Pledge, Our Christian beliefs, or Our Way of Life, I highly encourage you take advantage of one other great Australian freedom, 'THE RIGHT TO LEAVE'.'

'If you aren't happy here then LEAVE. We didn't force you to come here. You asked to be here. So accept the country YOU accepted.'

(Maybe if we circulate this amongst ourselves, WE will find the courage to start speaking and voicing the same truths.

If you agree please SEND THIS ON and ON to as many people as you know.)

(Let’s leave aside the issue of the fact that all the most terrible and infamous “terror attacks” are really black budget government inside jobs for this article.) Can you guess which lines interest me the most? It’s these two: “This man should be appointed King of the World.” and: “The Whole World Needs A Leader Like This!”

I’ve written about this subject many times before; see: http://hpanwo.blogspot.com/2008/11/british-national-party.html and:
http://hpanwo-voice.blogspot.com/2009/10/bnps-nick-griffin-to-speak-on-bbc.html . As you can see in the linked articles, I’ve long suspected that the immigration issue is a Divide-and-Rule/ Problem-Reaction-Solution ploy. Mass immigration can and does indeed cause social problems. But there is no frying pan in this world that is so bad that it justifies us jumping into a fire to escape from it. We must be very careful. When the media promote something that makes us angry, whether that anger is justified or not, it is usually designed to wind us up to the point when we will support anyone and anything that comes onto the scene to offer us a solution. The solution to the immigration problem may well be more extreme laws and enforcements; and can't we just see it in the bit where Kevin Rudd approves of Big Brother snoopers spying on Mosques! Paradoxically this can mean an even faster and further breakdown of national sovereignty because the ultimate anti-immigration measures will need to be internationally coordinated. The end result may even be a "Western Privilege Bloc" with a new Iron Curtain between us and the Third World. This is playing into the hands of those who are aiming for the New World Order, and those who support such policies are forging their own shackles, as well as everyone else's. What is remarkable about this email is that it confirms my suspicions, and this is the first example I’ve seen where somebody actually calls for a World Government under a single political leader to solve the problem that has been presented to them.

I was once a nationalist myself, a Welsh nationalist. Thinking back I can see where I went wrong. Only by exposing this agenda and defeating it can we solve any real problems. Poverty in the Third World is itself manipulated; it is unnecessary and easily preventable and with the end of the NWO agenda will soon cease to exist. This means that people won't want to travel to live in the USA and Britain etc; they'll be happy to remain in their homelands. After all, when you think about it, who's going to come to England for the weather!

Exactly, Ustane. Too often we are goaded into fixation on immediate difficulties and conflicts. We must keep our focus broad and ask ourselves every time: "How does this relates to the bigger picture?" It'll be worth it in the long run.

This just gave me an idea. In my country, th U.S., what if we took all of the money we spend on anti-immigration and spent it on creating jobs and education opportunities in mexico? It seems like it would be win-win

King of the downe under world! What malice this white man with skinny legs has. Finding work is a global concern. Those darn Aussies practically elimanated the natives, created some of the biggist open pit mines on the planet, have a dolt called Rudd who could find a concilitory aproach to his underclass, but no, like many here in America feel imigration is nationalist cause. The white man came to Austraila some 200 years ago as a so called immigration problem. Borders sans borders should be every human beings mantra.Each to his abilities, each to their needs. Dennis

Anon, it would indeed for us, but it would be a lose-lose situation for the New World Order agenda. It's no wonder that the things which make the most sense are never done, andywhere!

Dennis, that's true. The support Rudd is getting from the public is typical of the way we're encouraged to focus on small-acale issues, and to see them as individual matters which are not connected to other issues. We rarely stand back and see the bigger picture. It saddens me that many people I know who understand about the New World Order still cannot see through this very obvious scam, and vote BNP etc.

I'm about to put up a second article on this subject. See the page top.