BNP and David Irving at the Oxford Union 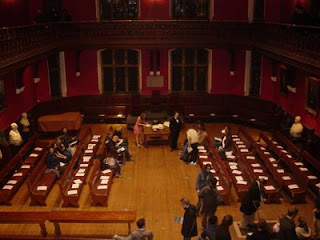 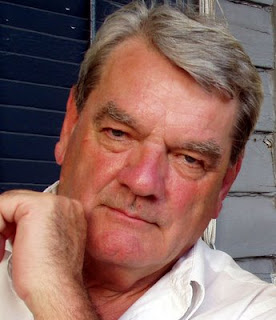 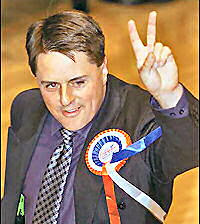 Last night, the British National Party leader, Nick Griffin and the Holocaust revisionist David Irving spoke at the Oxford Union. I was in Oxford city centre anyway, having an evening out with my friend and brother porter Kevin. We’d just been to the cinema to watch Sleuth (an awful remake; pathetic and boring for me, a big fan of the original film).We were walking up towards Carfax to get some food and as we walked up Cornmarket Street we saw a huge gang of a thousand or more protesters outside the Union in neighbouring St Michael’s Street. They were packed tightly in the narrow street and waving banners and placards in the air shouting slogans. Kevin wanted to go to KFC so I said I’d join him in a few minutes; I felt a deep curiosity over what was going on; I wanted to investigate the debate. There were a lot of police around, including horses and a riot van and the scene looked angry. I pretended to push through the throng to get to the other side. As I was doing so I noticed a man behind me who looked familiar. I turned around and saw that it was George Galloway MP: http://www.georgegalloway.com/. I said “Hello, George”. He replied “Hi there” and shook my hand like a true politician. I feigned ignorance and asked him what was going on and he told me that Griffin and Irving were there and said “It’s a good turn-out of protesters tonight”. I went back to eat with Kevin, and afterwards I suggested we go back to the Union, but Kevin felt nervous and went home. I returned to the Union and got to a position where I could peep through the railings by the gate.

The crowd were getting more and more vocal. They chanted, among other things: “OXFORD UNION- SHAME ON YOU!” and “THIS IS NOT FREE SPEECH DEBATE- THIS IS UGLY FASCIST HATE!” Eventually a few people jumped over the railings by the main gate and the security guards tried in vain to arrest and eject them. There were several newspaper and TV news crews around doing interviews. The area was brightly floodlit to help the cameramen. Here are the news stories relating to the event: http://news.bbc.co.uk/1/hi/england/oxfordshire/7113984.stm http://www.thisisoxfordshire.co.uk/display.var.1861263.0.protests_boil_over_at_union.php I was curious to see Irving and Griffin, along with other reasons, in case they might shape-shift! I didn’t see them except from a great distance across the courtyard. In the end the police escorted them out of the Union and the protest broke up.

This event disturbed me. I’m not a BNP supporter, nor do I agree with Irving and the last thing we need is a new Nazi regime in Britain, but seeing and listening to the protesters I began to wonder whether such a tragic turn of events may be preferable to a country ruled by the far left. What if these people ever got into government? In their vision of Britain, anyone who differed too far from their views would be silenced by law or even by violent action.. There would be no trial or hearing, because these things would be banned under their regime, the leaders of the government, i.e.: the people protesting last night, would decide on their own who was or was not a fascist. I recalled the story of the protests in Vancouver, Canada, when David Icke went to speak there in 2000. He was harassed by a rent-a-mob of students trying to stop him speaking, determined that local people would not hear his views. Of course anyone who’s studied David’s work in depth will know that he is the least fascist person who ever lived!

This is the issue: Can’t we make our own minds up? If we’re not allowed to just hear for ourselves what all people have to say then how will we ever be free? We can’t be free when some bureaucratic elite is making these decisions for us. It’s patronizing and insulting that these people think they know best what we should and should not hear. For all we know Irving and Griffin might not be fascists! The protestors say they are, but we have to take their word for it because we don’t get to hear their message for ourselves! I agree with Evan Harris. Let's not turn Griffin and Irving into martyrs. If their beliefs really are all nonsense then let that nonsense be blown apart in the marketplace of ideas. Locking it away from sight will not make it go away. On the contrary, it will just fester in the underbelly of society, preying on the disillusioned and desperate, people fed up of being told what to think! I’m disappointed in George Galloway for putting his flag next to this protest; I thought better of him. I’ve always admired his stance against the War on Terror and the New Labour regime and it’s a shame he’s done this back-flip now.

Some friends of mine in Birmingham who attended Probe with me, are BNP supporters. I’ve had long debates with them on the BNP and immigration, but they’ve always been good-natured wrangles. If I was one of these protesters I guess I’d just hurl abuse at them and walk out of their house! The BNP are not evil; in my view they are simply misguided. My friends gave me a copy of a BNP newspaper and I read their manifesto. http://www.bnp.org.uk/pdf_files/minimanifesto2007.pdf I have to admit that if you take away their immigration policy and the bulk of their criminal justice reforms, the BNP sound very progressive to me. They oppose the EU, like me; they favour local government and democracy, like me. I would never vote for them if they were the last party on Earth, but I can understand why many decent people are attracted to them.

Immigration is a hot potato in the UK at the moment. We have several million foreign nationals living and working here. There have been calls from many people and several tabloid newspapers to end it. Personally I wonder why these people and newspapers never ask what I think is an obvious question: Why do so many people want to come and live here? What's the attraction of Britain? What is it about the immigrants' own countries that makes them want to leave them behind and travel to this cold, wet, hostile little island? Could it be that life in their own countries is so hard because of war, poverty and disease etc? My shift partner at work is one of several dozen Polish immigrants working there, and he told me that he can earn more money in a week in England than he can in a month in Poland. Another man at work is Rwandan and he says that before he came to live and work in Britain his whole family were living in a shanty. Thanks to his wages from this country they can now afford a proper house with running water and mains electricity (A luxury!) Nearly all the immigrants I know come from Eastern Europe, the Middle East or Africa, places where the people have suffered these terrible problems. When too many people want to go and live in a small part of the world then it can result in problems, but I'm opposed to border controls and regulations; I believe every citizen of this planet has the right to visit or live on any part of it he or she chooses. The solution is to improve life in all parts of the world. If the countries the immigrants come from were free from poverty, war and disease then I'm sure few of them would want to leave! What’s more enforcing a ban on immigration would require things like restrictions on travel, ID cards, biometric databases and surveillance… maybe this is why the media is stirring us up about the issue!;-)

I only know a little bit about David Irving and his views, but I don’t automatically shut my ears, and then get out the wooden stake and Holy Water, every time I see the label “Holocaust denier”. Now I’ve done that I’ve been amazed to find out that many Holocaust revisionists are Jewish! People like Norman Finkelstein and David Cole. Also many “Holocaust deniers” don’t deny the Holocaust! Many say that it did happen, that millions of Jews were murdered by the Nazis, but that certain aspects of the crime were fabricated or covered up to serve a political agenda. The group most commonly accused of being the perpetrators of this hoax is the Zionist movement, the people behind formation the state of Israel. Israel has nothing to do with Jews at all; it is in fact an outpost for the Illuminati to control the flow of oil and impose their will generally across the oil-producing region, like the Falkland Islands; see my post on this: http://hpanwo.blogspot.com/2007/10/belgrano-last-shot-of-war.html . The Jews have been hoodwinked into being harnessed to the Zionist stagecoach and the trauma of the Holocaust, however much of it is real or unreal, has been a big part in their conditioning. So some Holocaust revisionists are actually sticking up for Jews! Far from being anti-Semitic, you could say they are “pro-Semitic”. Many countries have laws against questioning the official history of the Holocaust and Irving himself has done time for it in Austria. Another is the Canadian Ernst Zundel.

What I said above about the Oxford Union applies here: No censorship! Let them have their platform and see if they can sink or swim in the marketplace of ideas. From what Evan Harris said, Irving and Griffin were pretty much demolished in the debate last night. That is the way to deal with those you disagree with, the adult, wise, logical way. As Voltaire said: “We will never be truly free until we are willing to passionately campaign for the rights to free speech of those we oppose.”
Posted by Ben Emlyn-Jones at 10:36

Great post. One of the few I've read this morning tackling Griffin's and Irving's ideas head-on in an intelligent way, without fear or robotic ad-hominem attacks. The usual blog posts seem to support the thugs who wanted to shut down debate.

Thanks, Andrew. Do you have any links to those blogs because I'd like to comment on them. I intend to be polite and respectful, but frank and direct.