My Trip to a Haunted House 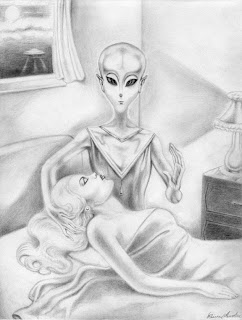 Perhaps “haunted house” is the wrong term. In paranormal research “haunted” refers to a phenomenon associated with a particular place; in the case of this house, the phenomenon is related to the people living there. If they’d gone to live somewhere else then the phenomenon would have followed them there.

My hosts, Ann and Paul Andrews, are well-known within the paranormal research community. Their family has been the focus of almost every kind of paranormal manifestation you can think of: ghosts, weird sounds, poltergeist activity, men-in-black and especially UFO’s and aliens. Ann and all her children have been abducted, one of the boys repeatedly so. Despite all this they come across as a very down-to-earth and easy-going couple. They run a motoring business and breed dogs and cats. They eat pizza, listen to Radio 1 and complain when a bill arrives in the post. Their son Jason is an eccentric, but otherwise unremarkable young man with a fertile sense of humour and a passion for fast cars. There’s nothing obvious about him that would make you think that he’s spent his whole life being visited by beings from another world.

The Andrews’ live in a farmhouse on the flat expanse the Lincolnshire fens where tabletop farmland meets the sea of the Wash. They are very blasé about the continuous appearance of things that contradict known science. Ellis and I make more of a note of such things. Ellis has stayed with the Andrews’ before and when he did he had some almost unbelievable experiences. He’s written about them here: http://www.ellisctaylor.com/doggeddays.html I read this article in the days before we left so I’m sure you’ll forgive me if I was a bit apprehensive as we drove up the lane towards the house. Almost immediately we were unequivocally reminded that that this was no ordinary house. As we stepped out of Ellis’ car we looked over at a beautiful twilight sky speckled with stars. Straight away we realized that two of the stars were no stars. Nor were they aircraft, satellites or birds! Two of them were flying in little circles. Then one of them shot away to the east at very high speed and vanished. The other one vanished at the same time.

Ann and Paul treated us in a very friendly and caring way and made us very comfortable, but the strange events continued. I saw a fuzzy ball of light in my bedroom. It only lasted about a second, but it was definitely there. I’ve been seeing little flashes of light for the last two weeks, but this one was different. When we went downstairs we were sitting in the lounge when an odd noise broke out from the hallway next door. It sounded like someone rhythmically snapping their fingers very loudly. We rushed out into the hallway and the noise stopped. I at first suspected that it was Billy the parrot in the kitchen next door, but Ann told us that he never makes that noise. On Sunday morning I became even surer it was not Billy, because I was in the lounge when the kitchen door was shut and heard that noise. Ellis also heard a voice say “Very good”. I heard it too and thought it was the parrot again, but Ellis denies this. It was not the parrot’s voice and besides all I heard Billy say the whole weekend was “hello”.

We went out to a pub for a meal with Jason and his wife Jacqui and on the way back we had a strange escort. Some kind of misty shape was on the road ahead of us, dancing in the beams of Ellis’ headlights, keeping up with the car. It was as if sand or dust was being kicked up into the air from the white lines in the road.

The following morning I walked into the kitchen and felt heat on my face. As first I thought it was a light, but I also felt it when my back was turned to the light. It was as if there was a “hotspot” in the area of the kitchen door. Both Ellis and Ann felt it too and Ellis told me that a ley line runs through the house. Ellis can easily sense them because they make his feet warm. There were other incidents such as a light being left on at night in the conservatory. I came down early on Sunday and saw it. I tried to get in and switch it off, but couldn’t get the door open, not through some paranormal force, but because I didn’t know how it worked! Later on Paul came down and did it for me and he took the incident very much in his stride. “That kind of thing happens all the time round here” he said with a shrug. He took the same attitude when my camera broke down and wouldn’t work again even when I changed the batteries. The family has leaned to live with unreliable electrical equipment. Their internet connection is almost continuously out of order. So much so that Ann uses dial-up! This is another common feature of abductee households. (Strangely enough it can work the other way round. They have an old clock that never worked and the kids used to break it open and mess around with the innards, but one day it was magically repaired).

Unlike Ellis’ visit last year, I was not disturbed by any wayward spirits at night. In fact, after the brief encounter with the orb, I never once saw anything unusual in the upstairs of the house, much to my relief and the relief of another mate, Ben Fairhall (author of the Battling the Behemoth site) who spent the Saturday night in the same bedroom as me.

I’ve had a great weekend and I wouldn’t have missed it for anything. I was curious and interested more than scared and we certainly had some experiences to satisfy that! The Andrews family are lovely people and I hope I meet them again soon.
Posted by Ben Emlyn-Jones at 20:07

The Andrews' are a lovely 'down-to-earth' family with no pretensions, or ambitions, of fame, as I think you have noticed.
They are, like me, and everyone else who has these experiences, just doing the best they can to apprise everyone of the true facts regarding the nature of reality as we experience it.

And, I think it would be true to say that where we live is intuitively directed and that we would not live in just any old place. This applies to everyone having a major bearing on our life experiences, and thus our journey.

The 'hot spot' in the doorway between the hallway and the kitchen has been noticed before by many people who visit Ann and Paul. In a very real sense it is truly a portal.

I know what you mean and it amazes me that the Skeptics again and again accuse anyone speaking out about their paranormal experiences of only wanting fame and fortune. Yet again and again I encounter people who want nothing of the sort; they are usually far less materialisticly-minded than the Conformists. Usually their decision to speak out causes a loss of material fortune not a gain. Having almost finished Ann's first book it's clear that the phenonenon haunting her and her family has caused them an awful lot of stress, grief and hard work. I get the impression that they'd be delighted if it just went away and let them live a normal life. There's no doubt that what's happening to them is very real. We've experienced a taster of it ourselves!

Yes Ben. It's because their experiences are so similar to mine that we have bonded so closely. Never lose your wonder mate.

Yes Ben. It's because their experiences are so similar to mine that we have bonded so closely. Never lose your wonder mate.

I never will, Ellis. That I promise you and myself.

Quite worthwhile information, thanks so much for the post.
chevy dealerships | reputation management services | budget truck rental discount

You could be eligible for a complimentary $1,000 Amazon Gift Card.