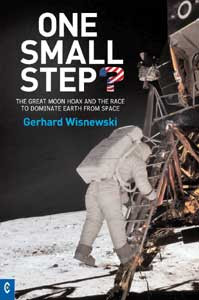 A new book has recently been published on the Apollohoax; an area of research that has been pretty much left stagnant for a decade or so since the work of Bart Sibrel, Bennett and Percy and a few others. I'd started to see the subject as fairly done to death, but now Gerhard Wisniewski has dusted it off. Whether he has anything new to reveal on the subject remains to be seen! You can order it here: http://www.clairviewbooks.com/pages/onesmallstep.html

Apart from the late moonhoax Godfather Bill Kaysing, nobody has produced a continuous narrative of the alternative history of the moon landings, but the basis of the theory is that the moon landing pictures were filmed at a secret studio on Earth and Neil Armstrong and the others never went there. I've written my own take on the matter here: http://hpanwo.blogspot.com/2008/01/moon.html

(BTW, the Bill Kaysing tribute site which I'd posted on the links column has been taken down, so I've relinked it to Bennett and Percy's Aulis site.)
Posted by Ben Emlyn-Jones at 16:25

I am the son of a man who was a leader in the appollo moon landing project, and i believe we never went to the moon. maybe that is why there is so much interest today in going "back" to the moon, because we have never been there.