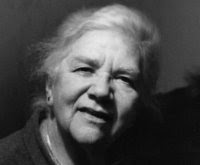 Isobel Menzies-Lyth has died at the age of 90. She was one of the founders of the Tavistock Institute. She worked in the 1950's with the newly-formed NHS and did a lot of good work; it's mostly due to her that many of the modern children's hospitals were built and she supported the current policy of letting the parents stay at the hospital with their children. She knew the famous Freudian psychoanalyst Melanie Klein.

I'm mentioning this because I knew her; she was one of my mum's best friends, in fact she was like a mother to her. Being her age she had lots of very interesting information; I remember Isobel telling me that she remembers Rudolf Hess landing in Scotland! At the risk of being accused of speaking ill of the dead, I found her quite difficult sometimes due to our very different personalities. She got very angry with me once when I told her that I believed Diana's car crash was murder. She said: "You're views are totally divorced from reality!" At times she was completely unapproachable. She was a Freudian fundamentalist and Skeptic. I never got the chance to discuss my admiration for Wilhelm Reich with her, but I can guess what she would have said! Despite everything though, I respected her.

The Tavistock Institute of Human Relations has become well-known in recent years as an alleged centre for mass mind-control. It was formed out of the Psychological Warfare division of the forces in WWII and has been involved in public and private organizations in a manner that is not altogether clear. Here is their website: http://www.tavinstitute.org/ I doubt if Isobel was an "insider" to any conspiracy going on there; she was too simple and down-to-Earth. If she was I think I'd be able to sense it because I'm quite good at picking up these things. She was a kind lady who was a tower of strength for my mum.

Rest in Peace, Isobel.
Posted by Ben Emlyn-Jones at 06:39