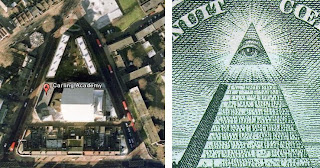 Since attending David Icke’s lecture at the Brixton Academy a few days ago (see below) this photograph has come to my attention. It’s an aerial view of the venue with the picture of the Illuminati pyramid on the US Dollar Bill for comparison; and they match! Astoria Walk or Brixton Road makes the foundation with Stockwell Road forming the left face and Stockwell Park Walk forming the right face. My jaw dropped when I saw it. David has delivered his last three British lectures inside an Illuminati truncated pyramid! It even has the capstone’s Eye of Horus on it! The Illuminati love putting symbols into things like street plans. They know that symbols can alter the spiritual energy of a particular place, the same way that a particularly shaped object placed in a river can alter its flow. (See my own articles on symbolism in Oxford: http://hpanwo.blogspot.com/2007/08/illuminati-architecture-in-oxford.html and
http://hpanwo.blogspot.com/2007/08/oxford-architecture-pictures.html )

The origins of this symbol are obscure. It is part of the reverse of the Great Seal of the United States of America. One story goes that Thomas Jefferson, who designed the Great Seal in 1782, was sitting at his drawing board one dark, stormy evening, trying out drafts for the Great Seal, when there was a knock at his door, not the front door, but the patio doors to his garden! He opened the doors and a man stood before him clad in a long black cowl with a hood. The spectral stranger handed him a piece of paper with this design on it. His visitor then left without a word. Jefferson looked at the piece of paper and saw the pyramid design and decided to incorporate it into his design for the Great Seal.

The official historical analysis for the design is that the unfinished pyramid represents the unfinished new nation of the United States; the shadow represents the undiscovered country in the Wild West. The eye is the eye of God, the Christian God, looking after the country. The continuous repetition of the number 13, the 13 levels of the pyramid, the 13 stars and 13 letters in the motto etc, is because the independent nation was originally formed out of 13 imperial British, Spanish and French colonies. These became the first thirteen states, a number that was later raised to 50. The Latin motto of the United States appears on the Seal: Annuit Coeptis- Novus Ordo Seclorum. The first part means “He favours our undertaking” (Who does?) and the second part is a quote from Virgil: “New Order of the Ages”. However this can also be translated as… wait for it… New World Order! Yes, the pyramid can be interpreted in another way: The structure representing the people. The bulk of the people are in the main pyramid, but there is a small superhuman elite, signified by the capstone, governed by the occult powers of Ancient Egypt and possessing knowledge that the "profane masses" are denied. The small gap between the pyramid and the capstone is the separation of the Illuminati, literally "The Enlightened Ones", from the rest of us. They see us as an inferior species. We're just one more breed of farm animal to them.

Does David know about this? Has he noticed that he’s doing his live lectures inside an Illuminati pyramid symbol? Why? Some people think he’s an agent working for them. I doubt this, seeing as he has such a transparent background, but I think he may be being duped by them. Did they subconsciously entice him to this particular venue? He should have listened to Matthew Delooze!

I got very ill very suddenly on the coach home from the 2006 lecture. I actually fainted in my seat. Was I being assaulted by the energy of the Pyramid and All-Seeing Eye?

Ever think why such a crammed and packed out venue could 'supply' a fair few doses of 'food' for these weird creatures ?

As for icke using it... mind blowing.

It just goes to show how crafty the Loomies are! Maybe David should think about finding a new venue. I'd like to hear how David ended up using the Academy in the first place? Who suggested it? Who organized it? Whoever they are I'd like a word with them.

David is very naive in some ways. He should read Matthew Delooze's books.

Originally posted by Sean,
David Icke Forum Webmaster:
"David was and is still well aware of the symbology surrounding the Brixton Academy."

So hes not as naive as you would like to think.

Here's a few thoughts about the excuses used to justify DI not making any money from the Brixton show.

John Peters has said that the cost incurred from renting the Brixton Academy is 35,000 pounds.

As this isn't the first time that DI has held a presentation at Brixton Academy, how much money has the Astoria group made from the talks that he has put on there ???

Does anyone see the irony of having the presentations at brixton Academy, when what is really happening at such an event is merely the financial support of one of the 13 families apparently being exposed by DI as ruling the world by those that are supposedly 'aware' and have 'woken up' to what is really going on in the world ???

As to the excuses supplied about the symbolism, not making money, etc, etc, I heard a saying, "Excuses are like arseholes, everyone has got one and they are usually full of shit".

Starwatcher, I've answered your comment on the HPANWO forum. It's easy to join and you're very welcome. Click the link on the links column, go to "register" and follow the instructions.

Wow! Well spotted. There is another such pyramid in Brixton, which has Brixton Water Lane as the base, and Brixton Hill/Effra Road/St. Matthew's Road making the edges.

Hi, amazing stuff!'
Ever since I as a very young child I knew that I was "aware"of things that others weren't.
I could see patterns and shapes that I knew were
put there for a reason.
A sign, a language, a direction or instruction ...I didn't know what they were (or for)
I found it was obvious (even to a boy) that they were placed by someone (or something) for a specific reason.
We are defiantly not alone!

If anyone is interested in corresponding about this or any other conspiracy related subjects, please email me at my email address(all emailed will bevaswered). My email address is youngangus**yahoo.com - the 2 asterisks are for the symbol( @ ) [just to stop The bots and search spiders)

You ripped off that research from Infinite-love forum, ya wee Plagiarist.

Originally posted by Sean, David Icke Forum Webmaster:
David was and is still well aware of the symbology surrounding the Brixton Academy.

The more proof you can see online, the easier it is to trust a home teeth whitening kit.
You should repeat all the technique for two weeks however.

Many dentists offer professional teeth whitening, however, a lot of individuals don't have the budget that is necessary to support this method, and do just fine with some valuable advice on the subject.

Get professional trading signals sent to your cell phone daily.

Start following our signals NOW and profit up to 270% per day.