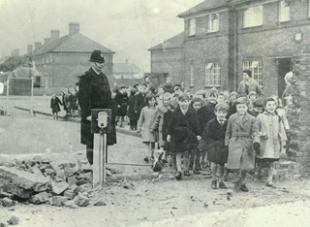 Most people have heard of the Berlin Wall or the West Bank Barrier in Israel, but few have heard of this smaller but essentially very similar barrier. The Snob Walls were really just a physical manifestation of the concept of social division. I’m encouraged that even as long ago as 1959, people were conscientious enough not to tolerate it. Although the intangible social divisions of our society are hard to define it’s clear that we do not like them because we attack them as soon as they become embodied into bricks and mortar. The photo above of schoolchildren crossing over the broken gap in the wall moves me very deeply. The comments on the first article try to justify Snob Walls, or similar things like “gated streets”, by claiming that people have a right to protect their communities from criminal elements, but I don’t think that this siege mentality will achieve that; in fact social disorder has its roots in these very pathologies. What’s more even if it did achieve security for people inside them, it would do far more harm than good because it will play our manipulators Divide-and-Rule game. As long as we’re slogging it out with each other we’re controllable because the powers-that-be will be sitting above the fray, pulling the strings of both sides and knowing that while attention is focused on our internal conflict we will be oblivious to our rulers. Along with Problem-Reaction-Solution and Stepping-Stones, Divide-and-Rule is the most popular political manipulation tool in the world. It has kept us in chains since the rise of the Illuminati at the beginning of history. It was for a Divide-and-Rule assault that King Charles II, and his forbears and successors, organized the Plantation of Ulster in which, over a period of a century, 40,000 Scottish and English Protestants were moved into the land that would later become Northern Ireland and split the indigenous nation of Ireland in two. This has resulted in hatred and carnage that has endured to the present day. The English Kings did not move the Protestants into Ulster and give them privileges over the native Catholic majority because they were “their kind of people”; they did it because they knew that the Catholics would resent it and begin attacking the Protestants. The Protestants would fight back and warfare would ensue. And all this time the English rulers would be able to dominate both sides. The result was that British rule in Ireland persisted for the next 300 years. These Divide-and-Rule ploys will continue to be used on us until they stop working. Divide-and-Rule is very versatile and can be cultivated over almost any varying feature of humanity: race, religion, language, culture, fashion code (As with the Mods and Rockers conflict of 1964). And when existing divides are no longer fertile ground you can invent new ones! It’s only a matter of time before we see riots in the streets between women who wear socks with high-heels and those who wear tights.

For me the most idiotic and pernicious Divide-and-Rule ploy has been that of social class; and this danger was exemplified in the case of the Snob Walls. People can be black, brown or white; English, Welsh or French; Muslim Christian or atheist, and yet still be reshuffled into various social categories. These categories are governed mostly by monetary and material wealth and have three main groups: working class, middle class and upper class. But even that’s not enough! We hear of the “lower middle class” and “skilled” as opposed to “unskilled” working class people. Yet if you stripped these people naked and paraded them in front of an audience it would be impossible to tell who was in which class. Some claim that class divisions are a natural part of our species’ make-up, but they’re not otherwise we would be different physically, like classes with bees and ants are (HG Well’s sci-fi story The Time Machine is about a future scenario where class differences have evolved into physical speciation). “Snobbery” is the special name given to the artificial emotion generated by this particular D&R. Its backlash, hostility towards someone of a higher class than oneself, is called “inverted snobbery”, but I don’t like to use the word “inverted” because it suggests that there’s a difference! In the book, together with its many film adaptations, The Railway Children the family of middle-class protagonists are frequently the victim of “inverted” snobbery. Like all prejudices I can see no difference in the two mutual discriminations. Male chauvinism is no different from radical feminism; racism against black people is the same as racism against white. English hate the Scots and call them “Jocks”; Scots hate the English call them “Sassenachs”. Both sides in a D&R will provide reams of historical, sociological or pseudoscientific evidence to justify their positions like “White people are naturally civilized”, “Men are stronger and cleverer than women” etc, but as far as I can see they are all what David Icke calls “opposames” and I challenge anyone to show me different. As long as we go on giving in to our D&R impulses we’ll be putty in the hands of the Illuminati Elite. The challenge to give up these prejudice addictions is a tough one, I’m sure it’s not easy when you’ve lived in a South African slum and your sister was raped by her White master. But we have to do it if we’re going to be free. If we can't manage it then we stay in the New World Order; it's that simple! The failure of the Labour Movement is partly because of D&R. I remember very well when I was a teenaged left-wing activist and was training as a shop-steward, being instructed by a senior officer of the union COHSE (Confederation Of Health Service Employees) to abuse private patients. All these people who think they’re fighting for freedom are merely digging themselves, and the rest of us, a deeper and deeper dungeon. Some even relish their lowly position and boast about their wild childhood on their rough estate! They’re doing an “I’ve Been There!” pose in my view! See: http://hpanwo.blogspot.com/2008/11/hpanwo-guide-to-being-ive-been-there.html . Yes, a deprived background has become a form of aristocracy in the Labour Movement and they would hate to see the genuine equality they pretend to want because it would deprive them of their “I’ve Been There!” status!

I hate it when somebody refers to me as a “class”. I’m usually thought of as working class because of my job, a hospital porter. But this very term is an asinine rejection of our common humanity, and that is the very basis of D&R! So I’m glad Vernon Brooke and the other people of 50 years ago fought the Snob Walls. I’d do the same if I’d lived there. But I’d fight the Walls without letting resentment for the more materially privileged people on the other side come into my struggle. In fact I’d ask them to join us in our campaign. So keep an eye out for any physical manifestations of D&R, but beware that in opposing them you don’t reinforce the social manipulation behind them. These things are being done to us deliberately; it is organized. There is a conspiracy going on. It’s about time it was stopped.

And remember that the source of most prejudice is fear, and so because of this: http://hpanwo-voice.blogspot.com/2009/04/britons-more-fearful-than-ever.html we should expect D&R to increase as the government wave scapegoats front of our eyes. PRS and Stepping Stones will become more commonplace too. Don’t fall for it!

Never heard of the snob walls before. Very interesting Ben.

Very well said Ben. I watched a Midsommer Murders last night that really focused on the 'great divide' - it was interesting just to notice how the producers/directors 'crafted' a dislike for the upper class & linked the viewers with the 'underdog class' - but in the end the feel was 'opposames' as you said.

I hope you are very well
ATB

ML, I'm glad to say that they seem to be quite rare. Oxford's are the only ones I can find in this country and they were of course demolished 50 years ago. Although they may... DO exist abroad. The barriers in Israel are just another Snob Wall really. They designed to divide a community and are motivated by fear of the criminal element. And like the Oxford Snob Walls they won't work, are unethical and wil one day be pulled down.

Hi WW. I'm OK. Hope you're doing alright. A lot of British drama is full of class prejudice. We seem to be particularly obsessed with class in this country. You're social status defines you! It's the source of many comedian's jokes and sitcom plots. I find it very tiresome.

Hi Ben,
Your readers might be interested to know that 'the wall' is a feature of one of the leylines driven by the Oxford Henge (which you also wrote about):
The one that goes through Cutteslowe Tumuli and on through Culham Research Laboratories.
It's on this page:
http://oxfordtalks.homestead.com/wow6.html

Thanks for that information, Ellis. I see the walls were rebuilt even after a tank crashed through them! The D&R brigade of Oxford were determined indeed!

Did you know you can shorten your long urls with AdFly and make $$$$ for every click on your shortened links.