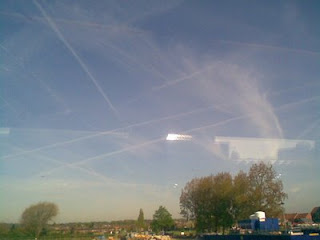 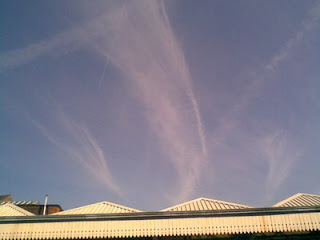 I've written about Chemtrails several times before; please see here for some essential background: http://hpanwo-voice.blogspot.com/2008/09/oxon-chemtrails-14908.html
And: http://hpanwo.blogspot.com/2007/10/chemtrails-and-tomorrows-world.html
And: http://hpanwo.blogspot.com/2008/10/ian-crane-war-on-terra.html
I took these photoes on Wednesday morning. The first was from a train somewhere between Derby and Nottingham and the second was from Nottingham Station. I'd noticed heavy Chemtrailing as soon as I'd left Birmingham on the train. In the space of an hour an entire crosslay had been dumped across the skies of the English Midlands. I've seen this on several occasions during the last couple of months and, as I did every time before, I watched the sky darken and sicken feeling helpless. But this time something I hadn't expected or seen before happened. Clouds started to move in from the north; not ordinary clouds either. These clouds were curved and latticed into convoluted and beautiful shapes, as if painted onto the sky with an artist's airbrush. They were also drifting in a different direction to the Chemtrails, in other words against the wind. To my amazement they enveloped the Chemtrails and seemed to virtually "ingest" them, leaving behind a comparatively clear sky. Then to my astonishment I saw one of the clouds actually pursue one of the high-flying aircraft that were laying the Chemtrails. This unearthly dogfight quickly passed out of view behind the Nottingham cityscape, but I managed to get a picture of what was happening, although the only camera I had was my mobile phone so it's not very good quality. Apologies!
Were these mysterious clouds Sylphs? I've heard several reports over the years of people seeing Sylphs. Well, actually the word "seeing" is wrong because the Sylphs themselves are invisible, but their presence can sometimes be revealed by strangely-shaped clouds accumulating around them, in the same way that smoke trails in a wind-tunnel can reveal the presence of the air currents. They are elemental air spirits, creatures whose very bodies are made of air. This might sound like a freaky concept, but is it? We have explored and learned to understand so much about our universe in the last couple of centuries that some scientists are tempted to think that we've sussed pretty much most of it and that we're now only a short step from total, absolute knowledge, the universal equivalent of the physicists' TOE, "Theory of Everything". I think this is a grave error. Not only are we a long way from total, absolute knowledge, but we have literally, as Carl Sagan once said: "waded just ankle-deep into the Ocean of the Cosmos". A few scientists are a bit more open-minded, like the great sci-fi story writer Arthur C Clarke. He once wrote a short story called Out of the Sun which was about a solar observatory which spots an object coming out of a sunspot that is made of superheated plasma yet keeps its shape and appears to be reactive and intelligent. He also wrote another story called The Fires Within which is about beings made of rock who live in the liquid interior of the Earth. Another great thinker, Fred Hoyle, wrote a fictional book about an intelligent black cloud in space. Why should intelligence or "life" be confined to physical animal bodies? Why shouldn't life be, as Mr Spock famously said: "not as we know it, Jim"? Life is merely what we've learned to call organized energy and matter; well it's not just living bodies that contain energy and matter. Solids, liquids, gases, plasmas, and maybe other states of matter we've yet to discover, also do.
The idea that there are intelligent beings made out of air is really not so crazy after all then. If there are such things as Sylphs then one thing is very clear by their actions: they are trying to protect the planet and its inhabitants from the Chemtrails. They therefore have a consciousness and intelligence that is capable of being analytical, caring and ethical. What else can I add except... Thanks, Sylphs!
(Latest HPANWO Voice stories: http://hpanwo-voice.blogspot.com/2009/04/area-51-disclosed.html
And: http://hpanwo-voice.blogspot.com/2009/04/non-conformist-invasion-of-bs-got-t.html
And: http://hpanwo-voice.blogspot.com/2009/04/roswell-debunkers-debunked.html )
Posted by Ben Emlyn-Jones at 17:49

There are four types of elementals known to me thus far: the sylphs being of the air are also known as 'sprites' and 'zephyres'; the earth spirits known commonly as 'gnomes', include a large kingdom with goblins, trolls, and elementals in the root of a tree; fire elementals being 'salamanders' and water elementals 'nymphs' and 'undines'.

Thanks for your comment, Ustane. I think all of them exist in one form or another. Different cultures across the globe all give them different names, but they all describe the same phenomena. This includes cultures who've had no contact, according to official history. I sometimes see shapes in the rivers and lakes near where I live; could these be the Nymphs and Undines?

Ben-thanks for this great post!! I wonder if they are stepping up the chemtrailing lately-Michael Skaggs at THA just had a post about it the other day. I love your comments in relation to the TOE-I also do not think we are even ankle deep yet into the mystery-hehe maybe not even TOE deep:-) The Sylphs are fascinating to me-but I do not know if I have anything to add-I have Jacques Vallee's ebooks Passport to Magonia and Dimensions downloaded-and both books contain infor on Sylphs-at least Passport does definitely-I believe these were free ebooks at scribd.com if i am not mistaken-best to you as always-great post!!

It's rather strange that you wrote about this as I just finished an article on air the other day - the synching up feels somehow magical.

Big thanks for this

Is Passport To Magonia on DL? Great. It's an must-read early UFO book, but so hard to get hold of. It's long out of print and only very expensive used copies are available. Vallee was a very intelligent guy and later generations of UFO investigatos should have listened to him a bit more. The classic Extraterrestrial Hypothesis has had its day I think.

Thanks, WW. Yes that's synchro indeed. I'll check out your article too.

Awesome pictures, there are some formations at times in the sky that one may wonder what the heck is that, and with so many UFO sightings these last years, it is hard not to think that.

The particles are EVERYWHERE they are impossible to see with the naked eye unless in high powered light beam, imagine baking flour but metallic. Its total impossible to take pictures of the particles with AF it is as if they not there in the pic’s,. we used a phones 3.2mp camera with NO AF set on fast shutter capture to take the picture behind the super intense flash of a Cannon 350D SLR. amazingly with your naked eye you can only see the particles around the flash but the cam caught more.

This cannot truly work, I believe so.

If you always write interesting, I will be your regular reader. skin care Read a useful article about tramadol tramadol

If you are going for most excellent contents like myself, only pay a visit
this site everyday as it provides quality contents, thanks