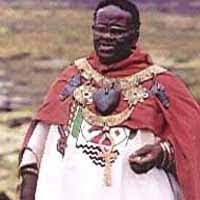 Alien contact, contrary to popular belief, did not begin in the 1940’s with the rise of multimedia science fiction; the first contactees were not Betty and Barney Hill. Alien contact appears to be something ubiquitous and universal, a phenomenon that has existed side-by-side with human beings probably since prehistoric times, maybe for as long as we have been humans. Before the advent of sci-fi it used to be called being "spirited away by the fairies" or goblins and trolls, but it's the very same thing. Another myth is that all these experiences can be explained away purely as deceit, delusions and hallucinations, the product of a deranged mind or a loser on the make. This is not so, although some Skeptics will attempt to claim otherwise. One thing I am always on the lookout for is experiences by different people who live a long way from each other, and therefore are unlikely to have met, who describe similar aspects to their experiences. I’ve found some examples that are extremely similar; the links between them are hard to explain away as coincidence.

A few years ago I first saw The Reptilian Agenda, a 5 hour interview by David Icke with the Zulu shaman Credo Mutwa (http://credomutwa.com/ You can obtain a copy of The Reptilian Agenda here: http://davidickebooks.co.uk/index.php?act=viewProd&productId=19 ). In this interview Credo describes how in 1959 he was walking in the Inyangane Mountains in eastern Zimbabwe when he was surrounded by a strange mist and the next moment found himself in a metal tunnel shackled to a laboratory table. Another man was there whom Credo met in the street in normal circumstances a few years later, so corroborating the experience for himself. He suffered various unpleasant examinations during his ordeal which are common in alien abduction reports: specimens of blood, sperm and other body substances being extracted etc. However it is the descriptions of the entities he encountered that is the most important thing. First he saw a tall humanoid being in a metallic helmet with visible eyes behind goggles; it wore a tight-fitting grey overall. The second creature he encountered looked very similar to a human woman. It was short in stature and had blonde hair and slanting blue eyes. It was naked and had a voluptuous and sensual body, but curiously its pubic hair and the hair in its armpits was red; not red as in a natural human hair colour like ginger, but red like blood or red paint. This creature climbed on top of the prostrate Credo and raped him. After several other bizarre incidents Credo was released. The Inyangane Mountain range has a reputation for paranormal activity and there have been many disappearances there, especially in the 1980’s, sometimes without the victim being returned. 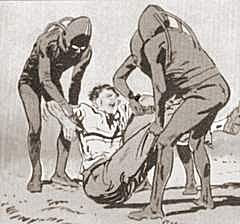 This report came back to the forefront of my mind with shocking recognition when I read another report in Unexplained magazine. In 1957, two years before Credo’s experience, a Brazilian farmhand called Antonio Villas Boas was driving his tractor late one night when he was snatched by tall grey beings with metallic helmets, that had clear eye covers, wearing tight-fitting grey overalls. But the similarities to Credo’s experience do not end there, in fact they get even more remarkable. Villas Boas was taken aboard a saucer-shaped craft and subjected to a medical examination very like Credo’s, with blood being taken from his chin by a “suction cup” instrument. Then he was left alone in a room with a comfortable couch and another being entered the room and sexually assaulted him. The creature who did it was almost exactly like the one that Credo would encounter two years later. Villas Boas describes it as looking like a short, blonde woman with blue, slanting eyes and pale skin. It had an exquisite feminine body, but its pubic hair and armpit hair were blood red. Unlike Credo, Villas Boas recalls enthusiastically engaging this creature sexually. This I find unlikely. I’m a healthy red-blooded feller, but I can’t imagine being able or willing to respond sexually in such a terrifying situation no matter how much I was fluffed. Villas Boas and Credo both remember being forced to inhale a gas just before meeting this being and my guess is that they were given some kind of “date rape” drug that made them more susceptible to being seduced. Reproduction is a common theme in alien contact with sex gametes being manually extracted and, more rarely, natural sex acts between the humans and extraterrestrials. It seems very unlikely that two such similar encounters could have happened coincidentally. This is reinforced by the fact that Credo and Villas Boas lived thousands of miles apart on separate continents and in very different cultures. The Villas Boas case was not well publicized at first and it’s unlikely that Credo, who was well-educated but lived in a very insular Zulu community, would have heard about it before relating it himself in one of his books in the 1980’s. (Indeed he never had his own website until a few years ago, and was branded as primitive by some of his ignorant critics as a result).
There’s another incident Credo mentions in The Reptilian Agenda that links to another more famous abduction case in the United States. Whitley Strieber wrote of his own enthralling experiences in his bestselling book Communion in the 1980’s; it was soon made into a film starring Christopher Walken with a score by Eric Clapton. In the film there’s a scene where Whitley is sitting beside a classic Grey being. He touches the creatures face and the lower half of the face is revealed to be a mask; and underneath is a Reptoid being with green scaly skin and a long proboscis-like snout. Another mistake in our popular image of UFO’s is that they only ever happen in Western countries like Europe or the United States. UFO researchers have largely passed over 80% of the world! What they could learn if they didn’t! People are today arguing about whether aliens and a crashed UFO were salvaged at Roswell in 1947 while Credo Mutwa has been attending alien autopsies for years. When a UFO crashes in Africa it is often not spotted by the government and local people attend the site, retrieving the wreckage and the craft‘s occupants. Credo says that the Greys are actually not really grey. Their skin is actually a disguise. It’s a thin but very strong garment that needs to be cut with an axe and beneath it is a being called a “pinkie-pinke”, a pink entity with scaly reptilian skin. Apart from the skin colour, this matches completely Whitley Strieber’s report, despite him living a long way from Credo in a very different culture.

There’s more to alien encounters than we’ve been told. I’m not of the opinion that these are all physical creatures who fly in solid nuts-and-bolts spacecraft from physical planets within our own universe that we could see through a telescope; although some may well be. I think aliens are much more likely to be interdimensional and non-physical, like ghosts; although they can obviously take physical form to be captured at “Roswells“. But what is certain is that they are not the exclusive products of wild imaginations, brain-damaged junkies, attention-seekers and people who’ve been on the wacky-backy at Glastonbury. Whatever they are, they are real.
(Latest HPANWO Voice Article: http://hpanwo-voice.blogspot.com/2009/08/chemtrails-tables-turned.html and: http://hpanwo-voice.blogspot.com/2009/09/codex-starts-to-bite.html)
Posted by Ben Emlyn-Jones at 16:27

Very interesting read Ben - am also reminded of Matt Delooze's experiences in 'You Will Be Wiser When You Are Older."

I'd seen some of that Mutwa dvd, but hadn't watched the whole thing. I'm reading a book at the moment called 'The Body has a Mind of It's Own' & one of the things it looks at is how our brain sees & doesn't see things - it does seem rather keen to 'explain' everything logically but it has some interesting points. I wonder if something tangible in our brain decides whether or not we see 'aliens'.

I hope you are back in the peak of health :)

I am thanks, Alex.

Yes, I enjoyed "You'll be Wiser When You're Older". Credo should have "Doo-wah-didded" the aliens! :-)

I've been looking into something similar as you; the works of Stanislav Grof. He also sees alien contact as something related to brain function, although I'm glad to say that he too rejects the Skeptical mechanistic theory and sees aliens as having an existential reality. People on LSD and other drugs can have contact experiences. It's as if our brains are lenses that need to be well-focused in order to percieve the world around us and function in it. Sometimes the focus is lost. Some people are more prone to "blurring" than others, but under certain circumstances it can happen to anyone.

This is fifty percent entertaining. But then once more I'm extremely high right now

Hi everyone! I'm from London but am living in Berlin at the moment.
Gotta love this place!

Is Bigfoot Real or faux? For more than 4 hundred many years, there are actually reporting’s of a guy like beast that is definitely entirely coated in hair.
[url=http://www.is-bigfoot-real.com/]bigfoot screams[/url]

I'd like to understand how embracing technical debt works for you style above, specially in this topic development, I think we need more blogger with this sense, and also with this experience too. I love all about myths and this kind of situations, so thats the reason: I'm so happy to find this blog.

This is so obvious because the Alien's abductions have occurred since ancestral times, there are a lot of evidences that they have did it since time ago, actually there are some scientists that believe that Moises was abducted by an Alien.What do you think about it?...you remember, when Moises came back to the mountain he came older than before, scientists speculate that Aliens took him to their spacecraft and got him into a space travel.

Order a Sparkling White Smiles Custom Teeth Whitening System online and get BIG SAVINGS!
* Up to 10 shades whiter in days!
* Professional Results Guaranteed.
* As good as your dentist, for a fraction of the cost.
* Same Teeth Whitening Gel as dentists use.