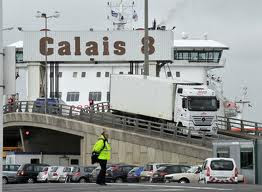 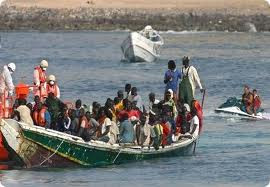 The other day a friend sent me an email that really got me thinking. It went like this. I reproduce it as it appeared in the email, all in capitals:

IF YOU CROSS THE IRANIAN BORDER
ILLEGALLY YOU ARE DETAINED INDEFINITELY.

IF YOU CROSS THE AFGHAN BORDER
ILLEGALLY, YOU GET SHOT.

IF YOU CROSS THE SAUDI ARABIAN BORDER
ILLEGALLY YOU WILL BE JAILED.

IF YOU CROSS THE CHINESE BORDER
ILLEGALLY YOU MAY NEVER BE HEARD FROM AGAIN.

IF YOU CROSS THE VENEZUELAN BORDER
ILLEGALLY YOU WILL BE BRANDED A SPY AND
YOUR FATE WILL BE SEALED.

IF YOU CROSS THE CUBAN BORDER ILLEGALLY
YOU WILL BE THROWN INTO POLITICAL PRISON TO ROT.

IF YOU SAIL ILLEGALLY INTO BRITAIN YOU GET !!!
A JOB, A DRIVING LICENCE,
NATIONAL INSURANCE CARD, SOCIAL SECURITY BENEFITS,
CREDIT CARDS,
SUBSIDIZED RENT OR A MORTGAGE TO BUY A HOUSE,
FREE EDUCATION, FREE HEALTH CARE,
BILLIONS OF POUNDS WORTH OF PUBLIC DOCUMENTS PRINTED IN YOUR LANGUAGE

THE RIGHT TO CARRY YOUR COUNTRY'S FLAG WHILE YOU PROTEST THAT YOU DON'T GET ENOUGH RESPECT FROM THE BRITISH
AND, IN MANY INSTANCES, YOU CAN VOTE.

It made me realize just what a hot topic Immigration is in the politics of the developed world, no more so than in Britain. We are seeing more and more people from the Third World flocking into the West looking for a better life. In some areas the native cultures are being displaced. There is now a large segment of society that is so concerned by Immigration that they are willing to do virtually anything and pay virtually any price if the government will just stop it. Anti-Immigration pressure groups and organizations like the BNP have achieved unprecedented success in recent years. The prevailing view is that the British Government is “weak” and “dithering” over the issue. They’ve been corrupted by “stupid liberals and evil Leftists”. Is that really what’s going on? What if the Government’s acceptance of mass-Immigration is not the result of passive, but of covert active policy?

In the background articles I link to above there’s one in which I review another email in which the author openly calls for a One-World Government to stop immigration, led by the former Australian Prime Minister Kevin “Chucky” Rudd. What form would that government take in order to achieve its aim? Well for a start you’d need tighter border controls. Independent border policies would be no good; there would have to be a single border between the West and the Third World, with perhaps a semi-permeable one between the post-war western and eastern European zones. At the end of World War II Winston Churchill coined the phrase “Iron Curtain” to describe the impenetrable border established between the two new Cold War power blocs. Today we’d need a new Iron Curtain, but a far bigger one; this New Iron Curtain would have to encircle the entire Earth! It would start with the existing US-Mexican border and cross the Atlantic to the Straits of Gibraltar. There it would follow the length of the Mediterranean Sea between Europe and North Africa and close off Turkey from Greece on its small land frontier and its extensive and intricate marine one in the Aegean Sea. From there it would run through southern Russia right across its vast continental expanse through eastern Europe and Asia to Vladivostok in the Far East. The Antipodean nations would need to be completely circumscribed, which may explain why Australia is already implementing some of the measures that I’m about to suggest. A smaller but otherwise identical boundary would also have to ring the archipelago of Hawaii before returning to its start between San Diego and the California Peninsula. There would need to be a separate enclave along the frontier of South Africa too. This border would have to consist of overland double barbed-wire fences manned by armed guards, with a limited number of tightly-controlled crossings-points for trade. Few, if any, people would be allowed visas to pass through. Where it crosses the sea the border will have to be a naval blockade, patrolled by heavily armed ships with guns, missiles, torpedoes and boarding parties. 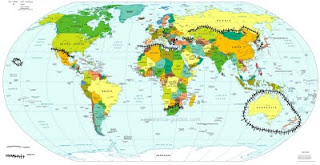 Internally this fortress of the Western World will need laws to cope with the situation of both existing immigrants and illegal émigrés. Let’s see if we can beat any of the examples in that email!:

1. There would have to be a vast, single biometric ID network in which every citizen would be forced to enroll in. Nobody would be exempt. No social or economic activity would be possible without clearing the action against your entry on the Database. From applying for jobs, claiming benefits, to entering public buildings.

2. An international DNA database that would dictate all medical and reproductive activity. People would need to be assessed and categorized according to genetic nationality.

3. Licensed reproduction and sex. Permission would be needed from the Government to have children. These children would be limited in number and genotype. Termination of pregnancy should be enforced by law where necessary in the event of disobedience. Anybody without enough native DNA would be banned from having children and maybe even rendered medically incapable of bearing them through sterilization surgery or chemical libido-suppressants. Sexual relations between Westerners and non-westerners would be banned to prevent social, as well as biological, miscegenation of the native Western races.

4. Draconian law enforcement measures and punishment of criminals to prevent anarchic elements from resisting. These would include summary (maybe public!) execution for serious or even moderate offenses.

(I’m sure there would possibly be a Number 6: Other laws to prevent troublesome Hospital Porters speaking out about the idea on blogs that this entire problem could be solved painlessly by ending Third World poverty; simply by declassifying Free Energy and advanced sustainable environmentally-friendly farming methods and water distribution!)

I dread to think what this system would mean for our children. It would mean that the Illuminati paedophile and Satanic outfits would be able to operate with total impunity and official sanction. There would be no need even for secrecy any more. Our young would become the farm animals of the Elite for sex, black magick and food.

As David Icke says: “Something must be done! This can’t go on! What are they going to do about it!?” Well, the above is the solution to the Immigration "problem”. I can’t see how this could be possibly achieved without implementing at least the majority of the polices above. We British would live in a country in which you'd need your biometric ID to open your front door, permission from the Government to take a boy or girl out of a date and a licence to get a new job or move house. I should point out that all these meaures have actually been suggested by various spokesmen for the anti-Immigration lobby over the years.

…But, look on the bright side! There would be no Immigration at all, so it would be much, much happier Britain!... Wouldn’t it?

I know. Thanks. Hope he gets out soon.

I've seen this area in Calais. When clever enough, you can try and smuggle yourself into UK there.

Anyway, MICROCHIP THOSE BASTARDS, as our friend Ian H. repeats - after "The Sun".

Hello, Neat post. There's a problem along with your web site in web explorer, may test this? IE still is the market leader and a big portion of folks will leave out your excellent writing because of this problem.
Check out my web page - video free chatting

Way cool! Some extremely valid points! I appreciate you writing this write-up plus the rest of the site is extremely good.
Also visit my site - Poker

hello!,I like your writing very so much! share we keep up
a correspondence more approximately your post on AOL?
I need an expert on this area to unravel my problem.

May be that is you! Taking a look ahead to look you.

Spot on with this write-up, I truly feel this amazing site needs much more
attention. I'll probably be back again to see more, thanks for the info!

Feel free to surf to my homepage :: http://xxx-fuck.net

5 MP is excellent resolution, but where and
how can you achieve it. With so many additional and better features in the Canon 5d mark iii camera,
it is not surprise that it is available at a much higher price
than the 5DMark III camera. The increased features of the camera in fact, justify the price
hike.