What if the Skeptics Had their Way? 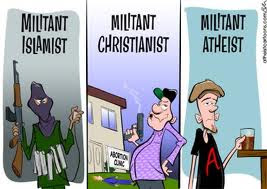 There’s a joke that goes: “Why do dogs lick their bollocks? Because they can.” Believe it or not there’s a thought-provoking message behind this piece of bawdy witticism. How many things do people only choose not to do because they cannot? What would happen if they could?

I tend not to make this common knowledge, but I’m a member of James Randi’s JREF Forum. I go by the soubriquet Porterboy and so far nobody has guessed my true identity (At least that is not until this article is published, because right now an infuriated member of the HPANWO Forum is frantically contacting the administration of the JREF Forum to warn them that they have a mole in their midst. Yes, by the time you read these words I will have been “outed” as an illicit Woo.) I only post occasionally in a “hit-and-run” style, but a subject came up a couple of years ago which compelled me to get more involved in the discussion. This is the subject-thread: The topic concerns a new law introduced by the local authorities in Philadelphia, USA, to curtail the activities of psychic mediums from operating in the city. The Skeptics on the JREF, who will tell you that they believe in civil liberties, almost to a man support this new ruling. This is disappointing, and very sinister; and I’ll explain why in a moment. Sometimes in the Theocratic regions of the United States there will be a case in which an Atheist or Skeptic will be discriminated against by the fundamentalist Christian authorities. For example, a teacher was once persecuted in his school for teaching the children Darwinian Evolution, when he’d been ordered to teach them only Creationism: Adam and Eve, Noah etc. Another example in Britain is Simon Singh, the science journalist who was sued by Chiropractors for calling them “bogus”; see: http://jackofkent.blogspot.com/2009/05/bca-v-singh-astonishingly-illiberal.html The Skeptics were up in arms about these actions and I actually agreed with them for being so too. For me it was not a matter of whether or not so-and-so was right or wrong, it was about the rights of Free Speech. However when it came to a case where non-Skeptics were on the wrong end of the law the Skeptical clamours and firebrands went suddenly silent.

I’ve read books and listened to lectures by the most famous Atheists and Skeptics, or maybe we should combine to two, because they usually go together, and call them Atheo-Skeptics. Richard Dawkins, Christopher Hitchens, Daniel Dennett; there are quite a few nowadays, part of the “New Atheist" Movement. The things they say are very unequivocal and ruthless: Religion is totally worthless and destructive, in their view. Here are some quotes: “Religion poisons everything” (Hitchens) “Our society is impoverished by superstition and lack of reason!” (Dawkins) “Psychics are either lying or mentally ill!” (Tim Minchin) The issue is totally polarized. There is no "other side of the story", as far as they’re concerned; Dawkins even lambasts Agnostics for not having made their mind up about a question that seems so obvious to him! The most extreme statement made by a radical Atheo-Skeptic must surely be James Randi’s claim that it’s either his way or “back to the caves!” With so much at stake, what lengths would these crusaders-without-a-cross go to? At the moment they’re pretty harmless, even beneficial because they do a good job of breaking through the Church’s power; but at the moment they’re a non-partisan lobby group, a union of individuals with similar interests who hold conferences and meetings and write to MP’s about homeopathy etc. They meet, like old ladies and drink tea and eat biscuits, or get together in informal pub gatherings (See: http://hpanwo.blogspot.com/2008/12/skeptic-in-pub-81208.html) But what if that situation changed? What if the Atheo-Skeptic Movement ever got hold of some real political power?

I want you to imagine for a moment that a Skeptical Revolution takes control over a part or all of the country you live in. Richard Dawkins or James Randi becomes president, or somebody like them, and they appoint similar people into their Government. The United Skeptical Atheist Republic is born! What would happen? Well there’s an optimistic scenario and a pessimistic one. The optimistic one says that basically people are left to believe in whatever they want, but all the unjust laws that promote and give immunity to religion are abolished in favour of Secularism. The Church of England would be disestablished, the House of Lords Church-based members would need to go through the same elections as the other representatives, faith-based schools would be abolished and blasphemy laws repealed. A few disclaimers on homeopathic or organic products, and that’s it. I’d actually support all those measures. That kind of Skeptocracy would be a great improvement on what we have now.

However there is the pessimistic line, a darker and fairly nightmarish scenario: Religion is banned, all churches either demolished or converted into public buildings. Children forcibly sent to “Science Camps” away from their parents. Religious parents having their children taken into care. Spiritualism and psychics criminalized by a new and harsher version of the Fraudulent Mediums Act. Paranormal investigations banned and believers in the subject declared psychologically unstable. Spiritualist Churches and Gypsy fortune-tellers’ tents burned. Organic food banned. Alternative medicine banned. You think that’s too extreme? You think Richard Dawkins and Jams Randi would never do that because they’re so nice and diplomatic now? History is replete with examples of how small “pressure groups” and even movements for genuine liberation mutate into tyrannies once they achieve the clout to bring their visions to fruition. Feminism is a good example. What was originally a very noble cause to liberate women from genuine oppression has become a regime in which men are now taking women’s former place as second-class citizens. My own town has “Man-Free” zones everywhere. We are prohibited from some shops, public buildings and events, like dogs or tramps! In South Africa today it is the white people who deserve our pity! Whites are finding it hard to get jobs because of Orwellian “positive discrimination” and “reconciliation” movements. They are being increasingly targeted by criminals. More and more people are being deluded into the dangerous fallacy that injustice can be fought by cancelling it out with another injustice; it can’t. All you get is a double-dose of injustice. In whatever Skeptocracy this hypothetical revolution takes, I think I have a right to demand answers because I’m going to be one of the have-nots. In the worst-case scenario, I’d probably end up dead or in an insane asylum. The Skeptics might well say: "It's for his own good. What would be the use of letting him think something so obviously incorrect and immoral!"

So we need to ask ourselves if the reason this hell-hole has not yet emerged is because there is something inherently good-natured and opposed to tyranny that is a fundamental ingredient to Atheism and Skepticism, or is it simply because like in the joke about the dog, they’re simply not able to yet? I ask all Skeptics reading this to look deeply into their own souls... OK you believe you don’t have souls... well, your minds then. Which are you?

I welcome all comments in the boxes below and posts on the HPANWO Forum about this subject.

Another fantastic piece of writing Ben!

Great post! I think the world is a much richer place with diversity of thought and belief. Sadly, it doesn't go hand in hand with tolerance... and that's where it all goes wrong. Regarding dogs, I always thought they licked their own balls to get rid of the taste of dogfood!!
All The Best Mate.

I saw really much worthwhile info in this post!

I am very happy to read this article..thanks for giving us this useful information. anti viral Read a useful article about tramadol tramadol

I am not positive the place you are getting your info, however great
topic. I must spend some time finding out much more or figuring out more.

Thanks for fantastic info I was on the lookout for this information for my mission.


Here is my homepage - Abercrombie & fitch

My spouse and I stumbled over here different website and thought I may as well check things out.

I like what I see so now i'm following you. Look forward to looking over your web page again.

Thankfulness to my father who stated to me on the topic of this weblog,
this weblog is actually remarkable.

My relatives all the time say that I am wasting my time here
at web, however I know I am getting knowledge every day
by reading thes fastidious posts.

Hi, yup this piece of writing is really nice and I have learned lot of things from
it on the topic of blogging. thanks.

Good way of explaining, and pleasant paragraph to obtain facts regarding my
presentation subject, which i am going to convey in college.


Here is my webpage :: Wholesale Jerseys

Useful info. Lucky me I discovered your web site by chance,
and I am shocked why this twist of fate
did not took place in advance! I bookmarked it.

Stop by my page; Home Page

Hello would you mind stating which blog platform you're working with? I'm planning to start my own blog in
the near future but I'm having a difficult time choosing between BlogEngine/Wordpress/B2evolution and Drupal. The reason I ask is because your design seems different then most blogs and I'm looking for something completely unique.
P.S My apologies for being off-topic but I had to ask!

I loved as much as you will receive carried out right here.
The sketch is tasteful, your authored subject matter stylish.
nonetheless, you command get got an shakiness over that you wish be delivering the following.
unwell unquestionably come more formerly again since exactly the same nearly very often inside case you shield this hike.

I just like the helpful information you provide on your articles.

I'll bookmark your weblog and check again here frequently. I am slightly certain I will be informed lots of new stuff right right here! Best of luck for the following!

It is really a great and helpful piece of information.
I'm happy that you simply shared this useful information with us. Please keep us up to date like this. Thank you for sharing.

If some one needs to be updated with most
up-to-date technologies then he must be pay a
visit this site and be up to date all the time.

I know this web site gives quality depending articles or reviews
and other data, is there any other website which
provides these kinds of data in quality?

I don't know if it's just me or if everybody else encountering issues with your
website. It appears like some of the text within your posts are running off the screen.
Can someone else please provide feedback and let me know
if this is happening to them as well? This could be a issue with my browser because I've had this happen before. Cheers

Peculiar article, just what I wanted to find.

Follow our signals right now and profit up to 270% per day.