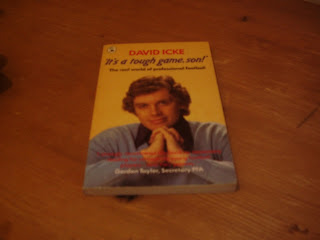 Ever since I first read The Biggest Secret, I’ve had an ambition to read every book ever written by David Icke. I immediately ordered …and The Truth Shall Set you Free and read it; then I went on to The Robots’ Rebellion and I am Me, I am Free. Then I picked up his four early works: Truth Vibrations, Heal The World and two other less well-known titles: Love Changes Everything and Days of Decision. Then I came across a copy of his 1993 autobiography In The Light of Experience, which is very rare. I then found out that he’d written another book on environmental issues before he “went spiritual”: It Doesn’t Have to be Like This. In the meantime I perused all his new books that we all know so well: Alice, Matrix, Time Loop, Infinite Love and Guide. I’ve got them arranged on my bookshelf in a long, proud display, in order of age (or at least I will when the people I’ve lent them to return them!) 15 titles in all. A pretty good oevre for any author.

But guess what! There’s a 16th book which David wrote in 1983 and was published by Piccolo, long before he “went spiritual” or even Green. It’s called "It’s a Tough Game, Son" and it came out in a single edition, long since out of print. It’s all about football and so not really relevant to his present work, but nevertheless it is a David Icke book so I decided I’d read it if ever I could; although I never really thought I’d find one, seeing as it’s so rare. But then last March at the UK Probe conference in Lancashire there was a man with a book stall. I was amazed to see a copy of the 16th David Icke book there for sale; I felt like an astronomer who’s found a new planet! It didn’t have a marked price so asked the seller how much he wanted for it. He said he didn’t know and told me to name a price. I picked it up and saw that it had originally sold for £1.50. I was about to point this out when I got a pang of guilt. This book is really a collector’s item and I felt like I would be robbing him. I told the man so and he said “OK, 20 quid”. I decided that that was too expensive and walked off wishing I’d kept my mouth shut. A few hours later I’d changed my mind, handed over £20 and got a faded 128-page book which was so old it doesn’t even have a barcode on it. But who cares? It completes my collection. My shelf is now full of every single David Icke book!

The book was written during David’s time as a sports journalist and is primarily aimed at teenage boys who are good at football and have a desire to play professionally. It is a guidebook, giving advice and warnings to any aspiring player. David is brutally honest from the first page; he begins with relating the lament of his own career and how it was destroyed by injury. He says: “Few professions can provide such elation and despair, sometimes within seconds of each other… It can be a cruel, cruel business. Don’t forget it.”. The sad truth is that there are probably millions of young boys, and some girls, who dream of being big football stars, like the ones we see all the time on TV: some of the most famous names in the country. But of those millions, including very talented schoolboy players, only a 1000 or less are signed up as apprentices by top league clubs every year, and of those 1000, only a fraction ever pass on to be professionals. There are young teenagers who shine as youth or under-21 stars, even winning major international tournaments, who then flop because the competition is so fierce in the senior league and their very names are forgotten. Even if the apprentice is taken on by the club as an adult professional, he will need to fight and claw his way up a greasy pole to make it onto the pitch with the first team in a league or cup match. Three quarters of professionals are dropped in their first year without so much as being on the subs’ bench. The figure is reduced even more when you consider that of that lucky quarter; only a few do well enough to be invited back in front of the fans again. And as David himself found out only too well, the spectre of injury holds its dagger poised over every player’s head constantly, no matter how successful you are.

The most interesting thing about reading this book is when David wrote it, he had no idea of what the future would hold for him. How could he have guessed that 8 years later he’d be standing on a mound in Peru possessed by spirit energy? As a reader who knows what happened to him after he wrote this book, I searched avidly for any clues in the writing that might indicate where David’s destiny lay. I also looked to see any similarities in his style with the familiar one he has today. Sure enough there are a few: “If you remember nothing else from this book, for your own sake please remember these next few lines.” Does this sound like a familiar phrase? It’s what David often says today when he introduces Problem-Reaction-Solution. In this book he introduces the subject of so-called “blue forms” with the same words. Blue forms are (or were at the time of writing) contracts given out by the biggest clubs to schoolboy players. David believes that they are a complete con. He says that they force the young player to only play for that one club and refuse all offers by others. It also provides no guarantee of being signed up as a professional player when you leave school, or even an apprenticeship. David recommends to the reader that they refuse to sign it and instead asks to be offered an apprentice’s contract after they’ve left school. If the club is really interested, they’ll wait, and if they’re not then they’ll drop you anyway.

All in all David makes the world of being a new footballer sound a bit like Pop Idol complete with its Simon Cowells who shatter a young man’s dreams in an instant with a brief interview in the coach’s office, or even a simple letter saying “We no longer require you to play for us”. But here’s another clue to David’s future: He ends on a very positive note, just like he does in all his future books. He says that he would never dissuade anyone from trying, because you’ve got absolutely nothing to lose! For all the heartache and devastating disappointment, for the few who make it to stardom, it’s a wonderfully rewarding life. Even if you don’t then you can often find a very happy life playing in part-time leagues; he sites a friend of his who used to play alongside him at Coventry City. He goes on to describe a few players whom he deeply admires, especially his fellow goalie and inspiration, Peter Shilton. When David was playing at Coventry, he used to travel all the way to Nottingham every Saturday when he wasn’t selected to play, even after a tough morning’s training, to watch the magic of Shilton’s goalkeeping. He describes in great detail an incident during a 1978 match between Leicester and Nottingham Forest where one of Leicester’s top strikers is almost on the goal line, in the air, waiting for a perfectly-weighted cross while Shilton was on the other side of the goalmouth. In any other situation that shot is as good as scored, like a gun at point-blank range, but somehow Shilton saves it! He twists his body back reaches out with an arm that seems to be infinitely long, and nudges the ball over the bar! The striker and the other Leicester players can’t believe it! Shilton was the eternal perfectionist, according to David, never accepting second best, ever critical of his own performance; fanatically dedicated. He used to train for hours in the gym, missing lunch and dinner, perfecting new ways to punch and jab the ball. David describes Shilton as quite simply “the greatest goalkeeper the world has ever seen” (And three years after this book was published Diego Maradona was forced to cheat in order to get a goal past Shilton to get Argentina through their match with England in the Mexico World Cup tie). He also sites Bryan Robson, Steve Perryman and John Hollins as players who’ve faced the terrible challenges of the football system and triumphed. They are the success stories of the meat grinder he describes that the young players have to come through.

David wrote this book long before he had any inkling of the revolution that was to take his life into the world we’ve come to know him in, but even still the structure of the content is familiar. Just like The David Icke Guide to the Global Conspiracy- and How to End It which David was to write more than 20 years later; “It’s a Tough Game, Son” is a book that is frank, shocking, illusion-shattering and disturbing, but it ends with an inspiring and optimistic note. It was written by our Dave alright, and he hasn’t changed that much!

I fully match with whatever thing you have presented us.

Hi to all, how is the whole thing, I think every one is getting more from this web page, and your views are
pleasant in favor of new people.
Here is my web site : teen sex party

The libido of men can be down due to various reasons.

Cholesterol clogs arteries and allows less blood flow to.
Then again, the tension he is sensing can shortly influence his confidence and might very easily turn to stress with regards to his
intimate sexual contact.

Everyone loves it when folks get together and share views.
Great blog, continue the good work!

Greetings! I know this is somewhat off topic but I was wondering which
blog platform are you using for this site?

I'm getting sick and tired of Wordpress because I've had
issues with hackers and I'm looking at options for another platform. I would be great if you could point me in the direction of a good platform.

It's been said that any bettor needs to see this,

Watch this or quit placing bets on sports...

I'll bet you won't guess what muscle in your body is the muscle that gets rid of joint and back pain, anxiety and excessive fat.

This "hidden primal muscle" is in your body and it will boost your energy, immune system, sexual function, strength and athletic power when developed.