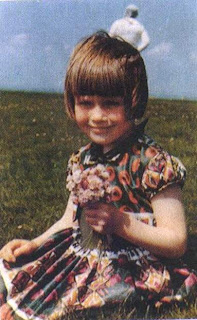 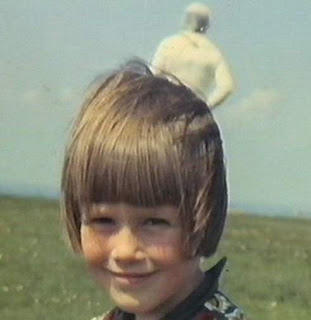 On May 23 1964 Jim Templeton, a fireman and amateur photographer from Carlisle, Cumbria, took his wife and 5 year old daughter out onto Burgh Marsh, a virgin natural wetland near the Solway Firth to take some photographs. They parked their car and walked out over a field with a lovely view. "All the animals on that particular day were away on the other end of the marsh, all huddled together, as though they'd been frightened." Jim said. "The weather was warm and sunny, and everything seemed normal". At a good spot they decided to take a photograph of his daughter in her new dress sitting with a bunch of hand-picked flowers. The snap taken, they moved off and took many more pictures of the walk. A few days later Jim got his photographs back from the chemist. The man behind the counter said that it was a pity that the strange man in a costume had walked past had spoilt the best shot of Elizabeth holding a bunch of flowers. Jim was puzzled. There had been nobody else on the marshes nearby at the time. But sure enough, on the picture in question there was something odd: overlooking her left shoulder, at a canted angle, was what appeared to be a man in a bizarre all-in-one white suit with a tinted visor. I've heard of this case before but never seen this picture in colour. I read about the case in Janet and Colin Bord's Modern Mysteries of Britain, but the picture they reproduced was black and white. I used to assume it was taken with a black and white camera, but not now. It looks far more impressive in colour and harder to write off as a fault on the film or a crushed insect in the photolab. Notice how the entity is definitely behind little Elizabeth's head and doesn't overlap it.
I'm not surprised to find out that Jim Templeton was harassed by Men-in-Black in the weeks following the incident. This was many years before the concept of Men-in-Black became well-known in popular culture. I've recently spoken to other people who've been visited by these frightening people, (if indeed they are people in the sense we understand it). The person dressed in a white suit like the one in this case are common too and I know several people who've encountered them. If you can't see their face then it's not really safe to assume that whatever is inside the costume is an ordinary human. Look at the picture again and see the unnatural position of the being's arm. It looks as a normal arm would look seen from behind, yet the head looks likes it would shot from the front.
The dome-shaped building just visible on the horizon is Sellafield nuclear power station. UFO's and aliens seem to be strangly attracted to nuclear installations for some reason. Cumbria was also the place where Blue Streak rockets were developed and scientists testing them in Australia around the same time saw a very similar entity in the vicinity too.
(NB: I posted this article on HPANWO last year and it has mysteriously disappeared. Keep your eye on this one and see if it does the same.)
Here's another post about this incident: http://hpanwo.blogspot.com/2008/01/solway-firth-spaceman-2.html
Addendum: I was interested to reread this old case with the hindsight of The Solway Firth one: http://www.ufocasebook.com/Zamora.html . Just a few weeks earlier a New Mexican policeman called Lonnie Zamora had a close encounter with a pair of beings that he describes in a way that makes them seem very similar to the Solway Firth Spaceman; on this occasion they had a craft with them!
Posted by Ben Emlyn-Jones at 09:47

This is a strange one.
The body looks as if it is a back view - it's only the shiny visor that gives the impression that it's a front view.
Normally with fakes you expect a 'better job'.

Yeah. It doesn't look like the classic Spaceman of science fiction. The part of its head that looks like a visor could simply be something else and the creature's face (or whatever its species has at the front of its head) could be on the far side of the head. Then again its chest looks like a human chest would look like from the front. This being is a complete mixture of poses and angles that could have come straight out of a Pablo Picasso painting! If Jim went to the trouble of producing a fake; he'd have done it better. As I said to Babage on the forum, there are many reason why faking this incident is unfeasible.

I have some very distinct memories of horse riding over some once, relatively wild areas of Tingley (West Yorkshire)in the late 70's - early eighties. The very same area that Sigmund Adamski eventually "disappeared" from... ( a famous & unsolved case)
At the time, I witnessed people completely geared out in white space suits from head to foot entering and leaving a strange dome shaped structure in the middle of nowhere....
Whenever I see photos of the Solway Firth Spaceman it reminds of those events....

Hi ETM. I remember you saying when I first posted this article on HPANWO... before it mysteriously disappeared! You've seen these strange beings too. So has the Andrews family which I wrote about a few months ago.

Anatomically by arm positions it would be the back of a humanoid with a side profile face looking to the left.
Please click on the "1916 Sky Apparition" thumbnail at the following:

http://www.unexplained-mysteries.com/gallery/thumbnails.php?album=11
....it is a very close resemblance.

Anatomically by arm positions it would be the back of a humanoid with a side profile face looking to the left.
Please click on the "1916 Sky Apparition" thumbnail at the following:

http://www.unexplained-mysteries.com/gallery/thumbnails.php?album=11
....it is a very close resemblance

Its an interesting case, but it does seem to be explicable.

The thing nobody mentions about this photograph is the peculiar angle the 'being' is standing at. It doesn't matter if the 'being' is facing towards or away from the camera, it's angle of stance is unatural, even if it was walking along.
I'd also like to see the other photos that were taken that day, to compare light and composition. These don't appear to be in the public domain.

Yes, Duke he would have fallen over if he was leaning like that. Gordon, despite your analysis, the lack of additional information can't back up the idea of a "Mod" in the background.

Oldmanskates, Gordon and Duke. Would you like to join the HPANWO Forum? It will make discussion easier. I'll bump the relevant thread.

Thanks, I joined as 'ShaineTW' see you there sometime :)

I have read read a million variations of the Spaceman story but one area I would like more info one is Jim Templeton's wife.

According to his account she was their, with Jim and the Daughter and it would be interesting to know what she looked like at the time (i.e. stocky - like the Spaceman) and whether she was wearing light coloured clothing which could account for the figure.

I think what I am getting at is - could the wife have wandered across the shot without Jim realising as he was busy taking the photo?

You may find my recent investigation article on the Spaceman photo quite interesting.

I think I may have uncovered a new angle on the Spaceman mystery to do with the geography of the area.

Look at the arm, that figure is facing away from the camera. So why does it have a "visor" for the back of its head? Some people see what they want to see. because we're programmed by evolution to see faces...like faces in the clouds, jeasus in a piece of toast.... Good luck with that. This is not fake, its just not what you want it to be. But that dont mean we are alone, there are some awsome mysteries out there in a billion galexies there has to be something other that just us.

@Will Smith,
You're right. It is the back of a figure which is looking to his/her left. Notice the profile of left side of the figure's head. The clothing and hood matches common bee keeping suits of that area. Many bee keeping sites for honey production are located near where the shot was taken.

Way cool! Some very valid points! I appreciate you
writing this article plus the rest of the site is
very good.

Thank you for sharing your thoughts. I truly appreciate your efforts and I will be waiting for your next write ups thanks once again.

hi!,I like your writing so much! percentage we communicate more about your article on AOL?
I require an expert on this space to solve my problem. May be that's you! Looking ahead to look you.

Feel free to surf to my weblog: prix fenetre pvc

It's very straightforward to find out any topic on net as compared to books, as I found this piece of writing at this site.

You actually make it seem so easy with your presentation but I find this topic to be
really something that I think I would never understand.

It seems too complicated and very broad for me.
I'm looking forward for your next post, I will try to get the hang of it!

Hi there, I found your blog by the use of Google whilst looking for a
similar topic, your web site came up, it appears to be like good.
I have bookmarked it in my google bookmarks.
Hello there, simply changed into aware of your weblog thru Google, and
located that it's really informative. I'm going
to watch out for brussels. I'll be grateful in case you proceed this in future. Lots of other folks will be benefited out of your writing. Cheers!