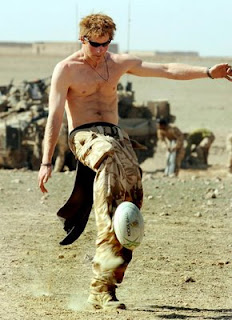 The Currant Bun has been obsessed with Prince Harry's service with the army in Afghanistan in the last few days. Every front page has had pictures of him, either on active manoeuvres or just frollicking around at base camp. Predictably the paper has also been exploiting the story as a sexual conformist propaganda coup by having Harry met at the RAF base he came home to by topless "Page 3 girls"!

The thing that hit me while I was looking at the pictures was that the some of the landscape in the background looked familiar to me! But I've never been to Afghanistan! Were these pictures of Prince Harry really taken in Afghanistan? Or were they just shot on a day trip to Prestatyn Sands? Has anyone heard any recent reports of any British beaches or dunes closed to the public by mysterious roadblocks?

If Prince Harry never really went to Afghanistan then I'd be relieved for him! He'd have been in mortal danger every moment over there... but not from the Taliban! In 1983, around the time Harry was conceived, Diana was having an affair with a man called Captain James Hewitt, her riding instructor (in more ways than one!). Many people have commented that Harry's physiognomy doesn't resemble his father's at all. William looks very much like Charles, but Harry looks more like Hewitt! Decide for yourself: http://images.google.co.uk/images?hl=en&q=james+hewitt&um=1&ie=UTF-8 If Harry really is Hewitt's son then the govt will probably be looking for a way to arrange an "accident" for him, like they did his mum. The Royal family has a long and sordid history of how it treats its "bend sinister" element; they either kill them or lock them up in dungeons!
Posted by Ben Emlyn-Jones at 07:57

Hi Ben,
Don't know if you may have stumbled across the recent article in
Scotland on Sunday or not?
Max Clifford is claiming that the Prince Harry story was a publicity stunt.
http://scotlandonsunday.scotsman.com/uk/Clifford-claims-tour-was-39publicity.3834303.jp

Max Clifford is not someone you would class as credible.

Thanks, ETM. I'll have a butchers.

I've read it. I'll have to look into more of Max Clifford's work. He's been branded a "media manipulator"? Does this imply that Rupert Murdoch is not!?

I like the phrase "virtual reality" and I'm sure that's exactly what it is, although the scenario he describes is the mere tip of the iceberg. I hope Clifford's Thomas-like doubt spreads to the rest of the newspaper-reading British public.

Being sure you should be able to back up your claims with evidence, can you?

Well why do you think I appealled for witneses to any unusual, activity on beaches and dunes?

Hello! This is kind of off topic but I need some help from an established blog.

Is it very difficult to set up your own blog? I'm not very techincal but I can figure things out pretty fast. I'm thinking about creating my own but I'm not sure where to start. Do you have any ideas or suggestions? With thanks

Here is my site www.phen375consumerreviews.net