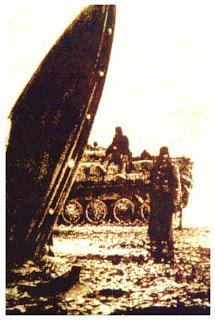 I’m not surprised to see Roger Moore presenting this. He’s best known as one of the actors who played James Bond, but one of the things he’s less famous for is being very open-minded when it comes to paranormal and conspiratological matters. He even grew up in a haunted house!

This is definitely the most interesting of the various “Roswells” that have happened around the world. This one has been subjected to far more rigourous scrutiny than the famous Santilli-Shoefield film, and it has passed far more of the authenticity tests. Santilli and Shoefield have admitted that their film was a fabrication and the story of their antics has been skillfully dramatized in the very entertaining feature film Alien Autopsy, starring Ant and Dec. Santilli and Shoefield never released the original cinefilm for forensic tests; unlike this film. Experts in pathology and photography never gave their approval to it, unlike this film. Here is the Santilli Shoefield film so you can compare it: http://www.youtube.com/watch?v=sVcaT2QnoDs.

This is more likely to be a genuine UFO crash film than any other I’ve heard of; in fact I’m surprised I’ve never encountered this case before! It deserves to be more famous than it is! When I see the saucer lying there I’m struck by the lack of disturbance to the surrounding area. The snow-covered ground and bushes are intact and the soil has settled around the object. This is not necessarily evidence of a hoax, but it indicates to me that the object crashed some time, maybe several years, before it was discovered and filmed. If the crash had only just happened then there would be marks on the ground, snow tracks, broken undergrowth and even the odd damaged tree. The soil would also be scarred and displaced from the impact. The creature in the autopsy footage was also badly decomposed, suggesting some time had passed between its death and its examination (Who knows how quickly, or even whether, aliens decompose!?).

If this was, as the film suggests, only a training film then two questions immediately leap to mind: Why was it classified Top Secret? And why was the 1960’s Red Army carrying out training drills for the recovery of artifacts and corpses from an extraterrestrial civilization?

I also wonder if Anastasia, made famous by the Ringing Cedars books, has heard of this. She had a lot to say in the first book about UFO's. (I'll try to recall, but I can't check becuse I've given the book away to a Polish woman; the series has been translated into Polish along with nearly every eastern European language, but she badly wanted to read the English translation by John Wordsworth and Leonid Sharashkin) Anastasia said that UFO's "solidify" air. They take in air and turn it into solid lumps of material that propels the craft. Anastasia says that you can even easily and safely hold these "lumps of air" in your hand! So she must know quite a bit about the UFO phenomenon over Russia. So she should. UFO's appear everywhere, but Russia is likely to have the most being the biggest country in the world; the old Soviet Union was even bigger; it covered more than 1/6 of the Earth's landmass. The famous Tunguskaya Incident happened in Siberia in 1908. A massive explosion, measuring about 58 megatons, bigger than any modern nuclear bomb, devastated the forest heartland of Siberia; the cause was unknown. This mystery was not investigated until the 1920's, because of the years of political upheaval during the Bolshevik Revolution. Then Leonid Kulik of the new Soviet Academy of Sciences traveled to the site of the incident, one of the remotest locations on Earth. There he found the signs of a massive exposion; millions of acres of felled tree corpses with new trees growing in between them, but no impact crater. Whatever it was, it exploded above the ground without even leaving fragments! What was it? Well, I've only read up to Book 5 of the series; maybe Anastasia will reveal all in the next ones! I read a short but interesting book called The Fire Came By written some years ago which presents strong evidence that the explosion was in fact caused by a UFO.

I should include a link the main English language Ringing Cedars of Russia site if you've never encountered it before (It's Canada-based, but there are different national Anglophonic sites in the USA, Britain, Australia and New Zealand that can deliver the books to you cheaper if you order them locally. They're well worth reading): http://www.ringingcedars.com/
Posted by Ben Emlyn-Jones at 15:17

Uk is not my primary language, but I could understand this using the google translator. Remarkable article, you can keep them coming! Thanks!

Tremendous post! Could you follow-up on this amazing subject?

Does your blog have a contact page? I'm having a tough time locating it but, I'd like
to send you an e-mail. I've got some suggestions for your blog you might be interested in hearing. Either way, great website and I look forward to seeing it improve over time.

Do you have a spam problem on this website; I also am a blogger, and I was wondering your
situation; many of us have developed some nice procedures and we are looking to
exchange techniques with others, please shoot me an e-mail if
interested.

I do agree with all the ideas you have presented for
your post. They are very convincing and can definitely work.

Still, the posts are too brief for newbies. Could you please prolong them a little from subsequent time?

whoah this blog is fantastic i really like reading your posts.
Stay up the great work! You understand, lots of individuals
are looking round for this information, you can aid them greatly.

Definitely imagine that which you stated. Your favorite reason
seemed to be at the net the simplest factor to keep in mind of.
I say to you, I definitely get annoyed even as other people
consider worries that they just don't know about. You managed to hit the nail upon the highest and outlined out the whole thing with no need side-effects , people could take a signal. Will probably be back to get more. Thank you

I create a leave a response each time I appreciate a article
on a site or if I have something to add to the conversation.
It is a result of the sincerness displayed in the article I read.
And on this post "Russian Roswell". I was actually
moved enough to post a commenta response :-) I do have a
few questions for you if you tend not to mind.

Feel free to surf to my web-site Cheap NFL Jerseys

Today, I went to the beach with my kids. I found a sea shell and gave it to my 4 year old daughter and said "You can hear the ocean if you put this to your ear."
She placed the shell to her ear and screamed. There was a hermit crab inside and
it pinched her ear. She never wants to go back!

LoL I know this is totally off topic but I had to tell someone!

You actually make it appear so easy with your presentation however I in finding this topic to be
actually something that I think I would by no
means understand. It sort of feels too complex and very huge for me.
I am looking forward on your subsequent put up, I
will attempt to get the hold of it!

Magnificent beat ! I would like to apprentice while you amend your
web site, how can i subscribe for a blog site? The account aided me a acceptable
deal. I had been tiny bit acquainted of this your broadcast provided
bright clear concept

Thankfulness to my father who informed me on the topic of
this blog, this weblog is in fact amazing.

Here is my site Air Max

What's up, this weekend is fastidious for me, for the reason that this point in time i am reading this impressive educational post here at my house.

Ever wanted to get free Google+ Circles?
Did you know that you can get these AUTOMATICALLY & ABSOLUTELY FOR FREE by registering on Like 4 Like?

Get professional trading signals delivered to your cell phone daily.

Start following our signals NOW and gain up to 270% a day.