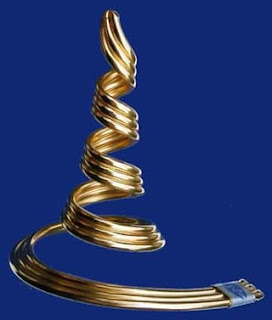 After Len’s speech Ustane and I went shopping. The conference was bedecked with a huge marketplace of stalls selling everything from crystals to water filters. After my own experiences with Orgonite, Ustane was determined to get a piece for herself (See here: http://hpanwo-voice.blogspot.com/2008/06/my-orgonite.html and: http://hpanwo.blogspot.com/2007/10/legacy-of-wilhelm-reich.html and: http://hpanwo.blogspot.com/2008/06/now-thats-weird-conference-2008.html). Happily we bumped into the couple who were at the Now That’s Weird Conference from whom I bought mine. I bought a copy of Jeff Stray’s book Beyond 2012: (http://www.amazon.com/exec/obidos/ASIN/095506080X/2012diregnosi-20); see the HPANWO TV films where I describe it. We then had dinner with the speakers and I got to talk to Dr David Bellamy, whose speech I’ll hopefully add to my report in a few days time. It was great to meet him; I loved his wildlife programmes when I was a kid; David Attenborough is rather staid beside Bellamy; in fact nearly everyone is! In those days I never thought the day would come when I’d be at a conspiracy conference with him. Ustane and I then used our gold ticket privileges to go and drink cocktails with the speakers. Unfortunately the cocktails were too expensive for us, but we had a nice glass of juice instead. We met Brian Gerrish and he’s a lovely bloke. He explained a bit about how neurolinguistic programming works; a subject he would elaborate on in his speech the following morning. He was concerned at being given the “hangover slot”, first session in the morning when nobody has woken up yet, a reminder of the conference’s boot-camp schedule. As it happened he needn’t have worried.

This is an excellent information about rife machine.Royal rife machine provides a specific frequencies that would destroy a cancer cell or a virus.

Aw, this was an exceptionally good post. Taking a few
minutes and actual effort to create a top notch article… but what can I say… I hesitate a whole lot and
never manage to get nearly anything done.

Feel free to visit my homepage; Search for love like you

Hi there to every one, for the reason that I am really eager of reading this webpage's post to be updated on a regular basis. It includes good material.

You might be eligible to receive a $1,000 Amazon Gift Card.

By using Car Rental 8 you can get the cheapest car hire from over 50000 international locations.

Start following our signals right now & profit up to 270% a day.

I really like his style of music. I will install his song as ringtone for me. You can also visit the site to listen and download music for free:https://ringtonesmobile.net/