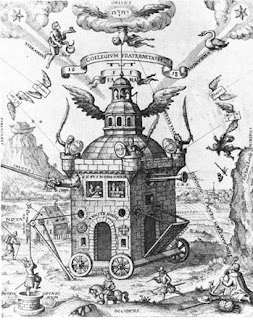 Adrian Gilbert-
In Search of the Invisible College
http://www.adriangilbert.co.uk/ and: http://www.theinvisiblecollege.net/ 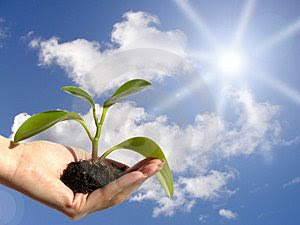 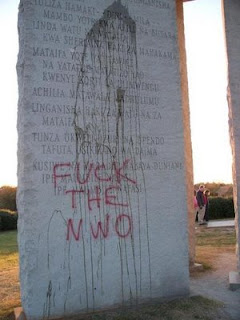 After the conference we traveled to Ustane’s house and I discovered what might have been the origin of the feeling of unease and foreboding that had haunted me all weekend. Sweetie, Ustane’s hamster, had escaped while we were away. After an all-night search we eventually found her trapped underneath a kitchen cupboard. We had to unscrew the cupboard from the wall to free her. I’m not sure how long she’d been there, but it was quite a while; possibly all weekend. She was dirty, hungry and thirsty; what’s more she’d chewed up some polystyrene insulation to make a pile of bedding. It was strange because although we knew how she got out of her cage; it had broken, we couldn’t work out how she got under the cupboard. There were no holes or cracks big enough for a cockroach, let alone a hamster; weird! If hamsters have the ability to walk through walls like some Tibetan monks are supposed to be able to then why couldn’t she walk through the walls out again? The reason I suspect that Sweetie’s predicament might have been the source of my mysterious sense of unrest is because I seem to have a psychic link with hamsters; see here: http://hpanwo.blogspot.com/2008/12/psychic-hamster.html . When I got home there was some good news. I won the conference raffle and therefore get a free DVD collection featuring every speaker at the conference. Those DVD's will give me many happy hours of recollection I'm sure. This has been the best conference I’ve ever been to and reviewing it has been quite a task. I’ll look forward to hopefully attending the next Alternative View Conference next year. Thanks very much, Ian and everyone else who brought AVII to life.

Unfortunately there is no mention of Esperanto which indeed is a living new language.

Sure, Brian. Cut-and-paste the vid link, everybody.

I have no problem with having a mutual lingua franca for people of different tongues to communicate. It just becomes a problem when an existing language displaces another. This has happened too much and since 1800 80% of the world's lanugages have died out. The Illuminati want us all speaking just one language, Newspeak, with a vocabulary of less than 2000 words and no conditional tense.

I enjoy your blog very much, as it is often thought-provoking, and also provides many links from which to delve into the subjects you cover. I also appreciate that you give summaries etc. of conferences you've been to/talks you've attended so that those of who could not, get a flavour for it.
But dude, a psychic connection to hamsters!?
I mean, I've nothing against the furry little creatures...but that is pushing the envelope a bit!
NWO conspiracies...UFO's...all fair game...but spare us the hamster stories...lol

Ben (AKA Hagbard) I've really enjoyed this set of articles on that conference. It sounds like you had a lovely time and your ladyfriend Ustane sounds like a charming girl. I'd love to go to one of these conferences, although I'd be hard-pushed to persuade the wife to join me! There's a lot to ake in here so I'm going to go through the article again, but I'm going to watch Ian R Crane and the others online right now. Footie

Anon. Thanks for your comments; any kind of feedback is always welcome. I'm glad you like reading HPANWO. My experience with DW and Sweetie the hamsters may sound comical, but I'm actually deadly serious. What I describe is what truly happened. I would never hold something back because it seems foolish. There's strong evidence that many animals have powerful psychic senses; why not hamsters too? We don't know what's going on inside their little heads and just because they spend all day stuffing their cheeks with nuts and scratching in the dust doesn't mean there's not more to their consciousness than that. I'm reminded of the mice in Hitch-Hikers' Guide to The Galaxy! I'm sure that I've done the right thing in relating my experience with HPANWO-readers.

Yo, Footie!" Good to see you back, Mate. How's life Down Under? Glad you like my report; I'll try to write something else for you when you have a long plane journey again. Why not check out my novel "Rockall" on Ben's Bookcase?

It cannot have effect in actual fact, that is what I think.
medic alert jewelry | dallas temp agency | Anti Anxiety Herbs

Have a look at my web blog; Louis Vuitton Handbags

I really like what you guys are up too. This kind of clever work and coverage!
Keep up the great works guys I've incorporated you guys to our blogroll.

Here is my homepage - Get More Information

I know this web site gives quality depending articles or reviews
and other material, is there any other web site which presents these
kinds of information in quality?

Here is my homepage; http://sakshat.amrita.ac.in/

Yesterday, while I was at work, my cousin stole my iphone and tested to see if it can survive a thirty foot drop,
just so she can be a youtube sensation. My apple ipad is now destroyed and she
has 83 views. I know this is totally off topic but I had to
share it with someone!

My relatives all the time say that I am killing my time here at
web, except I know I am getting experience all the time by reading such nice
articles or reviews.

Please let me know if you're looking for a author for your blog. You have some really good articles and I believe I would be a good asset. If you ever want to take some of the load off, I'd absolutely love
to write some content for your blog in exchange for a link back to mine.

Way cool! Some very valid points! I appreciate you penning this post and also the rest of the site is also really good.

Here is my site ... Clicking Here

I’m not that much of a internet reader to be honest but
your sites really nice, keep it up! I'll go ahead and bookmark your website to come back in the future. Cheers

May I simply just say what a relief to discover somebody who
actually knows what they're talking about on the net. You definitely realize how to bring a problem to light and make it important. A lot more people need to read this and understand this side of the story. I was surprised you're
not more popular since you most certainly
possess the gift.

Excellent article. Keep posting such kind of info on your blog.
Im really impressed by your blog.
Hello there, You've done a fantastic job. I will definitely digg it and in my opinion suggest to my friends. I am sure they will be benefited from this website.

There is a chance you qualify for a new solar energy rebate program.
Find out if you qualify now!

There's a chance you are eligible to get a $1,000 Amazon Gift Card.