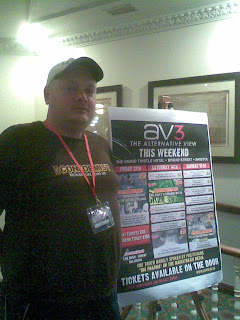 Friday Evening
The Alternative View 3 Conference was held at the Grand Thistle Hotel and it was very nice there, but it was a little difficult to find our way around in its maze of identical corridors. The food looked and smelled delectable and more than once Ustane and I wished we were staying in. The auditorium was once again elegant and comfortable; a carpeted hall with a well-designed backdrop. I saw a few familiar faces at once, but there were also many new delegates there for the first time. I think I might be forming an "AV Family" a bit like myy Probe Family. The event was opened by a funny and likeable man called Alex who came onto the stage wearing an Ickeian turquoise suit. Like before, Edge Media TV were there and the master-of-ceremonies were Franky Ma and Theo Chalmers. Here I begin my review of the speakers. I’ve reproduced my interpretation of what they said to the best of my understanding. If any of them are reading this, or anybody else better-informed, and I’ve made some mistakes then I apologize.

Cynthia McKinney
911-Donald Rumsfeld-Palestine Part 1
http://www.allthingscynthiamckinney.com/
Cynthia McKinney is one of only two decent people I know of who have ever tried to get elected as President of the United States, the other being Ron Paul. No doubt her decency contributed to her failure, as it always does in politics. I’ll come back to that point when we discuss Norman Baker‘s speech. Like many black Americans who are interested in their cultural origins Cynthia was dressed in a shawl that looked African in style. She speaks loudly and passionately in a riverboat accent that comes straight out of her home in the Deep South. Her quest for justice and freedom began as a child when she went with her parents to support Dr Martin Luther King before he was shot dead by “another lone nut” in 1968. She was one of two two-part speakers of the conference and she used up most of her first session showing us videos. The first was a song by Desert Rose, Who Is Your God which shows scenes of war and famine. It has lyrics in several languages to illustrate common humanity, which exposes such atrocities into the pointless absurdities that they are. Cynthia’s mission has taken her around her own country and all over the world, to South Africa and Gaza. In fact she was on the ship Dignity with David Halpin when it was attacked by the Israeli navy in 2008, see: http://hpanwo.blogspot.com/2009/06/alternative-view-ii-part-5.html . Like David she was lucky to escape with her life, but it didn’t put her off. She very bravely embarked again to Gaza to protest and give relief to the victims of the attempted-genocide known as “Operation Small Axe”. What happened then she describes in the second part of her address on Sunday, see below.
Cynthia’s political career began when she was elected to the Georgia Legislature. She immediately encountered opposition from the other representatives for her outspoken opposition to the 1991 Gulf War. She rejected George Bush Senior’s “7 Reasons for War” and was answered with a walkout by her “Right Honourable Friends”. She was witch-hunted out of the Georgia Legislature, but far from ending her political mission it encouraged her to stand for election to the US Congress under a human rights agenda. After being elected she joined the Armed Services Committee where she campaigned against the use of depleted uranium munitions and questioned President Bush on why there was no military response to the 9/11 attacks when they should have been able to easily locate and bring down the planes before they struck the buildings. Also, most famously of all, she grilled the then Defence Secretary Donald Rumsfeld over the war crimes of mercenaries employed by the government, the 9/11 stand-down and the suspected embezzlement of over 3 trillion $US from the US Defence budget. Not millions or even billions, but trillions. How can I describe it? Imagine a million pounds were just 1 penny. Now even on that scale a trillion pounds would still be £10,000. It's unimaginable! Here’s the very satisfying video of the exchange: http://www.youtube.com/watch?v=eootfzAhAoU . It didn’t take long for Cynthia to develop a reputation of sorts which drew the attention of that intangible and vague posse of mysterious individuals, political parties and organizations collectively known as the “Israel lobby”. (Here’s a Dispatches programme about the British arm of this group: http://www.channel4.com/programmes/dispatches/episode-guide/series-42/episode-1) This attention ended in her being deselected by her party, the Democrats, while actually in office; this is the only time this has happened in American political history. So Cynthia restood for election as an independent candidate. Her manifesto is based on the United Nations Universal Declaration of Human Rights, the same document that so inspired Nathan Sarea; see: http://hpanwo.blogspot.com/2009/04/probe-conference-march-2009.html . Along with her humanitarian work abroad Cynthia got involved with a very scandalous case in Oakland, California. She showed us a film outlining it. It is all about an incident where a young black man called Oscar Grant was executed by the police while handcuffed and lying on the ground. Cynthia feels as strongly about the plight of her own people, the black Americans, as anyone else. She quotes King: “A threat to injustice anywhere is a threat to injustice everywhere” and that’s very true. As long as we sit back and think “It’s OK, it’s their problem and it doesn’t effect me”, the Elite can pick us off one at a time and play divide-and-rule on us so that we even support their agenda ourselves! Cynthia believes that we can liberate ourselves peacefully and she gives the current freedom movements in Latin America as an example, like Hugo Chavez and others, which is very encouraging. Although there may be situations when we have to fight back with force to stop ourselves being killed, (See: http://hpanwo.blogspot.com/2009/02/military-do-we-need-it.html) I agree with Cynthia. There are 6 billion of us and only 13 of them, at the highest level. If we play our cards right there’s no reason why it should come to violence. Cynthia talks like a politician and has obviously been trained as one, but unlike most politicians she retains the three bodily organs that most of them have amputated when they put on their suits and rosettes: a brain, a heart and a backbone. She was a very wise choice as a speaker for AV3 and I’m sure she inspired others as well as myself. During the weekend she contributed enormously to our spirit and morale.

Friday Evening Ctd
The layout at the Grand is different to the Thistle Heathrow. All the socializing took place in a single high-ceilinged chamber with chandeliers hanging from it called “The Ballroom”. The first act was Gareth Icke, (http://www.myspace.com/garethicke) a brilliant singer who came on stage and played unplugged and solo on his guitar. If the name sounds familiar it’s because he’s the son of Our Dave. He was followed by the satirical genius of Deek Jackson’s FKN NEWZ (http://main.fknnewz.com/blog/), this was his second live show; the first being at the AV2 Conference, see links above. Behind my hysterical laughter though I suddenly realized that I had a painful duty to perform. Deek mentioned spirituality in one of his shows so I’ve been forced to strip him of his MBA. So from now on he no longer has the right to call himself “Deek Jackson (MBA Bronze)”; he’s just plain old “Deek Jackson”. Sorry, Deek, but at least you were only a Bronze; others have further to fall… but seriously, he was funny! His humour is scathing, aggressive and offensive… and brilliant. It’s what this world needs!

Thanks, Ustane. Yeah, it was good to see Rumsfeld squirm!

Those days of slavery were the worst of mankind, even worst than the wars, I hate racism people.

If you need your ex-girlfriend or ex-boyfriend to come crawling back to you on their knees (even if they're dating somebody else now) you have to watch this video
right away...

If you'd like an alternative to randomly picking up girls and trying to figure out the right thing to say...

If you'd rather have women hit on YOU, instead of spending your nights prowling around in noisy bars and nightclubs...

Then I urge you to watch this short video to learn a strange secret that might get you your personal harem of sexy women just 24 hours from now: