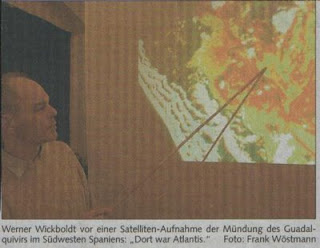 (This article is a slightly-updated edition of the current HPANWO Voice front story: http://hpanwo-voice.blogspot.com/2009/02/atlantis-found.html)
I never usually read The Sun, in fact I'd hesitate to wipe my arse with it! But yesterday I did because of this extraordinary headline: http://www.thesun.co.uk/sol/homepage/news/article2255989.ece
It shows an image of something that looks artificial on the seabed off the Canary Islands. This is in the very location Plato said Atlantis was in his famous book. It certainly resembles a street plan; and it's huge, as big as Wales. This also matches Plato's description, of Atlantis being a massive city. Was Atlantis just a made-up story? The scientific establishment says yes, but I disagree. The myth of Atlantis exists in one form or another in nearly all cultures across the globe; including many who are supposed never to have had contact. It's the same basic story as Noah's Ark from the Book of Genesis, Manu in the Rig Veda from India, the Welsh legend of Cantref Y Gwaelod, and the Zulu folk tale of Zaralelli.
Geologists, both mainstream and alternative, agree that the evidence is overwhelming that there was a massive global catastrophe in around 10,000 BC that ended the last Ice Age and altered the face of the planet in almost every way. For the people alive at that time it must have been an experience we can't imagine. The sea levels rising 300 feet in a week, submerging all beaches and coastal lands, torrential rainstorms measuring in feet instead of inches, worldwide hurricanes, supervolcanic eruptions turning the sky black and blotting out the sun for months. A waterfall as wide as the Bosphorous Strait filling up the Black Sea like a bathtub. The human survivors of this cataclysm would never ever have forgotten it and would most certainly have told their children and grandchildren about it; and those subsequent generations would have passed on the story to their own descendants. This memory endured to the present day to become these folk-legends of the Great Flood etc. However, conventional studies of prehistory say that 12,000 years ago humans existed in small groups; the Neolithic Age had only just begun and most people still lived in nomadic hunter-gatherer cultures. There were no cities, no nation-states like Atlantis is said to be and only a handful of settled towns numbering no more than a few hundred people. Many Mavericks have claimed that the myths describing a sophisticated prehistoric civilization are in fact real and the conventional scientists have got it wrong. However this alternative, minority view lacked hard evidence until recently. This latest discovery could be the biggest artifact supporting the alternative theory ever unearthed. It could blow our conventional view of human history out of the water, literally!
Sunken cities have been found before, most famously by Graham Hancock off the coast on India; see his brilliant book Underworld (http://www.amazon.co.uk/Underworld-Mysterious-Civilization-Graham-Hancock/dp/1400049512/ref=sr_1_3?ie=UTF8&s=books&qid=1235218407&sr=1-3). But so far all these ruins have been in shallow littoral waters off the continental shelf, on seabeds that are known to have been above the sea level in the past. This new discovery is different; if it is real then it shows the presence of a city in the intercontinental ocean depths, the Madeira Abyssal Plain. There is no process known in conventional geology that can ever account for this part of the ocean bed ever being on land.
Posted by Ben Emlyn-Jones at 11:57 4 comments:

The Military- Do We Need It? 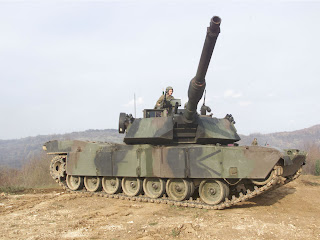 First let me say that I do truly do believe that humanity is going through a magnificent rise in consciousness and that completely peaceful world is perfectly possible. In fact it’s more than possible; it’s our destiny! War is not a product of the natural human state; it is an aberration. But after 2012 (or whenever) and the Illuminati are gone, we won’t all wake up suddenly one morning as priests of High Atlantis. We’ve become addicted to the Illuminati, like a drug or an abusive partner! There are no rehab clinics for us to check into, no domestic violence helplines; we’ll have to do cold turkey! World peace will not happen straight away, nor will it be easy to achieve. There will be a transitional period during which violence might still occur. In that situation it will be necessary to form armed organizations to defend our communities. To fail to do so could be suicidal.

As I’ve discussed on several other articles, the War on Terror is not one of these necessities; on the contrary, it’s a symptom of the very social pathology generated by the Illuminati. Despite my opposition to it, and all other manipulated wars, does this mean that the armed forces exist wholly for fighting such manipulated wars per se? Is there a legitimate role for the armed forces in the post-Illuminati transitional period? I think yes, for the reasons I state above. Some people suggest that the solution to manipulated wars is to abolish the entire war machine everywhere. But to simply disband the entire global military in one fell swoop means that all the military skills, experience and technological infrastructure will be lost. These things may well mean the difference between life-and death in the immediate post-Illuminati world. David Icke often says: “If you’re in the military, get out now while you still can”, but to prevent manipulated wars, war crimes, the killing of women and children etc, it is not necessary to quit the military; all that is necessary is simply to not do those things. In 1989 when the Chinese army was sent into Beijing to wipe out the student demonstrations, the first unit mutinied. There is that famous film of one man stopping a column of tanks by standing in front of them; then the driver sticks his head up and they have a conversation. The sanctity of the chain-of-command is something specially-designed by the Illuminati to break through a soldier’s personal conscience in the hope that they will commit atrocities. But it’s not just the military; the virtue of the “do as you’re told” ethos can be found in almost any job; it’s just more subtle in other professions. It will have to go if we’re to be free.

But I’m convinced that the transitional period will be followed by a truly peaceful world. There’s no reason at all why it should not. We live in a world where there are enough resources for everyone; the many wars caused by the engineered illusion that there’s not enough to go round so we have to scramble for what’s left will no longer happen when that illusion is blown apart. For instance when Free Energy is available to the public wars for oil fields will become totally superfluous. We’re also coming to understand that at a higher level we share the same soul and to hurt another is to hurt yourself. When this happens we will indeed be able to throw away all our weapons, but we need to wait until that time is here.