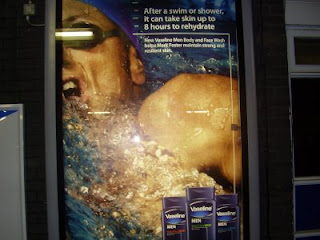 This was on a rotating billboard on Oxford railway station.

Can you see the sexual subliminal in this? It shows the swimmer’s shoulder and armpit, but if you glance at it briefly it could be interpreted as a perspective shot of his bottom! Of course this is an ad aimed at men, not women, so the image is homoerotic. But that’s how they get into our subconscious because for most of us any homosexual urges we might have are suppressed in our subconscious, so by accessing them an advertiser has a short cut to our subconscious! Diet Coke is marketed more towards women than men so this is why the old bottles had a subliminal that looked like women’s breasts on the label.

Advertisers use sexual subliminals all the time to draw attention and therefore success. A subliminal is anything that causes sensory stimuli that we experience below the threshold of our awareness. A lot of psychological research has shown that engineering subliminal messages in another medium works. In 1959 an experiment was done at a number of American cinemas when the film Ben Hur was released. The experimenters took a number of reels and put subliminal flash-frames in half them showing a Coca-Cola advert. As far as the conscious visual perception goes these flash-frames were invisible; if you were watching one of these reels there would be no way you’d be able to tell, even if you were warned to look out in advance, whether the subliminal frames were present or not. But the experiment showed that Coca-Cola sales were higher in the cinemas showing the flash-framed reels than the control group (Can’t remember the source).

The psychological illusionist Derren Brown has carried out a similar experiment on TV. I differ from Derren’s Skeptical views on Spiritualism and other things, but he’s bang on the money here: http://uk.youtube.com/watch?v=FEpdTZGfxCQ&feature=related

In my view subliminals are highly dangerous psychological weapons. Manipulating us to part with our money in exchange for worthless consumer-durables is their most benign function. They can, and are, also used by politicians to influence the people. For example when the West was trying to demonize the Libyan president Colonel Qaddafi they used embedded subliminals on the cover of Time magazine (David Icke live 2006). Experiments have also shown that subliminals, like more obvious forms of propaganda, have a much reduced effect if the subject is aware that they are being targeted; so this is why I’m writing this article, to make you aware!

(By the way, here’s a seasonal message to all HPANWO Readers: http://hpanwo-voice.blogspot.com/2008/12/merry-christmas.html . And just for a treat, I’ve posted two new articles. Scroll down here for the second one.

And here's yet another on the Christmas Truce: http://hpanwo-voice.blogspot.com/2008/12/christmas-truce.html)

Ben-I hope you have had a wonderful holiday season-I have spent most of the day curled up in bed-but I am very thankful for what I DO have and am not complaining-I am glad folks I link to do not seem to be putting up much new stuff-I am already so behind on reading everyone's work! I could not agree with your thoughts in this post more completely-I have seen this in so many adds both aimed at repressed urges hetero and homosexual and also-I have seen ads where I think a child is 'posed' entirely inappropriately for their age-this has happened far too many times to be accidental. Best to you as always-I hope you and yours had a splendid holiday and are getting ready to have a wonderful 2009!

Hi Devin, I had a nice Christmas; Thanks. I had to go to work, but at a hospital someone's got to do it! I know what you mean about being behind with my reading.
There's so much info out there and only so many hours in da day, Bwana! It's like trying to drink out of a firehose! Glad you had a good day curled up in bed. We're not encouraged mto be kind to ourselves and we're made to feel guilty if we do, so good on ya!

There's a brilliant website somewhere with subliminals on, but I can't find it. I'll have to check through my David Icke books because it's in there somewhere.

Hi Ben
Well spotted.
Seem to be noticing more & more these days myself - shapes just jump out at me. I think once you are aware they are there your mind keeps on the look out & they're easier to see, I do try & point them out but often get strange looks!!
There was one a couple of weeks ago, it was all in the layout of the words, like one of those magic eye pics, they rearranged themselves before my eyes & turned into a skull - wish I'd had my camera.

All the best to you

Hi WW, myes I remember that icecream poster you saw! They use bizarre and frightening images as well as sexy ones.

Someone on the David Icke forum spotted more subliminals on this poster. Do you see the word "SEX" written on his shoulder/ right bum cheek? It's made out of water drops and the X is the most prominent bit.

In my opinion everyone must browse on this.

Since the admin of this web page is working, no uncertainty very shortly it will be famous, due to its feature contents.

I really like what you guys are usually up too.

This type of clever work and exposure! Keep up the fantastic works
guys I've added you guys to my own blogroll.

Hi, its good paragraph about media print, we all understand media is a fantastic source of information.

Pretty section of content. I just stumbled
upon your weblog and in accession capital to assert that I acquire actually enjoyed account your blog
posts. Any way I'll be subscribing to your augment and even I achievement you access consistently quickly.

Hi there, its fastidious piece of writing concerning media print, we all be aware of media is a wonderful source of facts.


Also visit my homepage :: click through the following page

Hello! I've been following your site for a long time now and finally got the bravery to go ahead and give you a shout out from Huffman Texas! Just wanted to tell you keep up the good job!

Heгe is my homepage ... grow back hair

Нi! I κnow this iѕ kinda off topic but I waѕ wondering
ωhіch blog plаtfoгm are you using for this site?
I'm getting fed up of Wordpress because I've had issuеs with hackers and I'm looking at options for another platform. I would be great if you could point me in the direction of a good platform.

Which is better Coca-Cola or Pepsi?
ANSWER THE POLL and you could get a prepaid VISA gift card!

If you want your ex-girlfriend or ex-boyfriend to come crawling back to you on their knees (even if they're dating somebody else now) you got to watch this video
right away...

Get professional trading signals sent to your cell phone daily.

Follow our signals today and gain up to 270% daily.