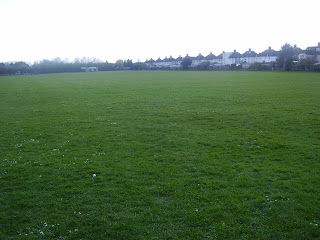 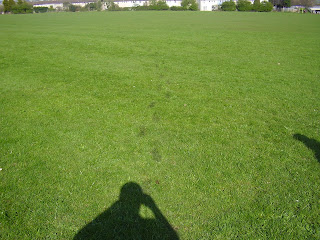 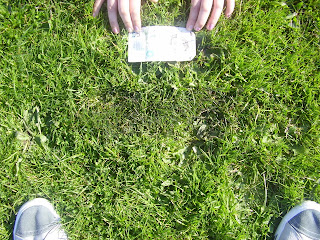 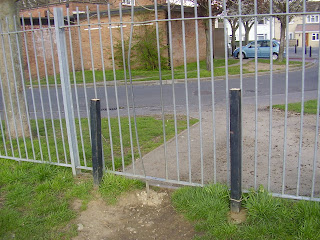 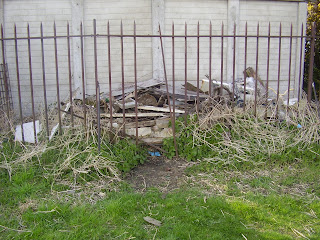 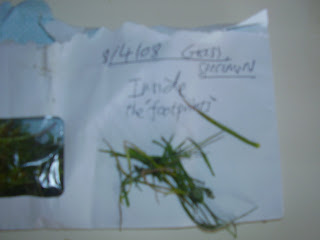 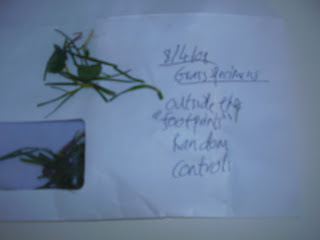 I’ve just begun the first HPANWO investigation into a suspected paranormal incident! I’ve been reading about other people’s investigation into these incidents, but this is the first time I’ve initiated one myself. And I haven’t traveled to some dark burial mound in the depths of the West Country or a clearing in a wood in Idaho. No, the phenomenon has taken place literally two hundred yards from my front door!

Description of Phenomenon: I was playing with my 13-year-old daughter in a park in Cowley, Oxford when I noticed a row of footprints across the grass (Top and second photo. The park can be seen on Google Earth in the south-east of the city in the corner made by the by-pass and Barns Road crossing at the bridge into Blackbird Leys). This struck me as most unusual; neither of us had ever seen anything like this before. Our feet do leave a small impression when walking across grass, but this mark is almost invisible and the grass recovers quickly. People walking can only effect grass over a long period of repeated use, like you get big long ruts acorss fields where people regularly traverse. As you can see in the photos, these footprints are very prominent and didn’t fade at all during the 45 minutes we were there. The spoors were of feet approximately size 10 with a stride slightly shorter than my own. This would indicate a person (if it was a person who made them!) a little bit smaller than myself. I am on the large side at 6’2, 18 stone and have size 12 feet, so the prints could be those of an average male adult or a bigger-than-average female; although as I learned during my brief affair with the Sea Scouts, the prints do not point obviously inwards as a woman's footprints do. The prints are in the bare grass; there is no other medium around to cause them, sand, gravel, frost, snow etc. How they were made is not possible to determine without laboratory analysis, but it seemed to me that the grass inside the prints is of a different consistency and quality to the grass outside it. I have taken specimens of the grass and soil, plus a control specimen from a short distance away. I’ve taken a photo of a single spoor, with a £5 note beside it for scale (Third photo), and it’s hard to discern from above, but as you can see, the prints are very clear from some distance away. I’ve discovered two rows so far. One runs is a straight line between two broken gaps in the fence. The gap on the west side of the park is at the back of a garden, as you can see in the fourth photo. Immediately inside the gap is the side of a garage or shed; there is no access from the space behind the gap to the rest of the garden as it is blocked by thick vegetation. If it was then it would provide easy access for burglars and presumably the householders would be concerned for their security. The row is dead straight and leads to the second gap in the fence behind a terrace of shops on Barns Road (fourth photo). There is a second row that runs from a gate in the south-west border of the park. This row meanders in arcs and dog-legs, and vanishes in the centre of the park where the grass gets thin on the football pitch. We picked them up again near the eastern border of the park and they run up to the tarmac cycle-path of the bypass. The prints look identical to the first set.

Theories: If these are human prints then how could they have been formed? As I said above, a single person walking over grass does not damage it and normally leaves no trace at all. We had a thick snowfall on Saturday night and I did wonder if the packed snow and ice under someone’s feet might have caused injury to the grass, but then if this was the case there would be many more rows of prints. This park is a 24/7 thoroughfare and is used for sports, recreation and dog-walking etc. During snowfall it would be thronging with children making snowmen and having snowballs-fights etc. The whole field would be speckled with similar spoors. I’ve never seen prints in the grass like this before, but you can bet I’ll be looking out for them now. Could it be a genuine paranormal occurrence? Many incidents in which ghosts, aliens or otherworldly entities appear leave traces in the surrounds: higher radiation levels, apparent heat and dryness damage, mysterious residue etc. Maybe this is one of them. I don’t have the money or skills to carry out a proper scientific investigation, but I have the specimens if anyone HPANWO readers want to help out. One thing I’ve mentioned on the David Icke forum that I haven’t here: I saw an object in the sky on Saturday night that might have been a UFO. Could there be a link? Another clue is in animal behavior. Animals often behave strangly in places where mysterious phenomena appear, dogs growl, cats hiss, birds refuse to fly over the area etc. I noticed nothing like that in the park; in fact a Dachshund was frollicking quite happily nearby while we were taking the photographs.

Next Stage: The next stage of the investigation is to go back today and see if the prints are still there. I should also visit the house with the gap in the fence and ask the people there if they’ve noticed anything strange. I’ll keep you up to date with any developments.

Many thanks to my daughter Louisa for helping me with this project.
Posted by Ben Emlyn-Jones at 15:52

They cut the grass in the park yesterday morning so most of the "footprints" have been obliterated. Looks like we got in there just in time! However, the surviving marks are still there. The grass inside them is still very distinct, but it is changing. Today it looked quite a bit drier. This is not clippings from the mowers.

Shame it happened so long ago, before photography was in widespread use. Thanks to Michael 6 of the David Icke forum for bringing these to my attention.

Hi Ben
I found this on the internet http://www.mysteriousbritain.co.uk/fortean/devils_foot.html

A good clue to the strangeness of this event is the fact that your teenage daughter was interested enough to help. Teenagers are notorious skeptics, especially of their parents.

Yeah, Louisa's a staunch Skeppie right now, a real Randiette! She was happy to help me, but was terasing me no end over the footprints, convinced there's nothing strange about them at all. No doubt she's making jokes about me to her schoolfriends! She's at the age now where she likes to argue everything and she tends to take the opposite poosition to anything I think as a matter of principle. Her catchphrase at the moment is: "Dad, please! I'm not in the moon for a David Icke lecture right now!" Still I've always encouraged her to make up her own mind and find her own answers. I'm glad I've brought her up to have independant thoughts.

Thanks for the link. The Devil's Footprints! Very creepy. I'm glad someone managed to take some casts. I wonder what they were! Shame photography wasn't in common use in those days, other wise we might have got some pictures. Well, who knows! The phenomenon might come back.

Follow our signals NOW and profit up to 270% daily.