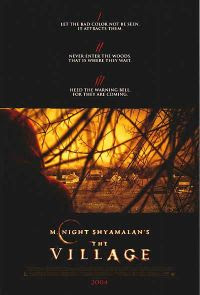 The Village is a most remarkable film from a very proficient director, M Night Shyamalan; it's my favourite of all his works. It is set in the 19th Century in a small isolated village in the middle of a thick forest. The people there live the life of simple Ye Olde Worlde farmers, completely self-sufficient. They’d have little need to visit the outside world… even if they could. The people are in fact trapped in their village, trapped by two things: The village elders, who founded the community twenty or so years before the setting, did so as a refuge from the outside world. All of them have lost loved ones to violent crime and tell their children that in the outside world, which they refer to mystically as “the Towns”, all people are evil and must be left well alone. The village-born generation revere their elders and accept their word as Gospel; in fact when one of the young villagers eventually meets somebody from the Towns she says: “You have a kind voice. I hadn’t expected that.” And there’s another problem: the forest surrounding their idyll is the domain of monsters known simply as “Those-we-do-not-speak-of”. These monsters are vicious man-eaters, but are intelligent and have struck a deal with the village elders. They’ve granted the villagers a small piece of territory in exchange for a tribute of some of the farm produce, which is left just beyond the boundary in a sacrificial-type ceremony, and the promise that no villagers will enter their woods, which is another reason why the people can never leave the village.

The remaining section of this article contains spoilers so I recommend that you watch the film before reading on.

Like Shyamalan’s other film, The Sixth Sense, The Village ends with an explosive twist: The movie is not really set in the 19th Century, but in the present day. It is built on a sealed-off wildlife reservation owned by Edward Walker, one of the elders played by William Hurt. It is reveled that he managed to arrange a no-fly zone over the reservation to prevent passing aircraft from spoiling the illusion. The whole situation is divulged when one of the villagers is critically injured and Walker’s village-born daughter, Ivy, played by Bryce Dallas Howard has to visit the Towns to collect medicine for the sick man. Walker also lets her in on the secret that the monsters are not real either! The elders made them up to stop the curious village youth from straying out into the world. They even go as far as to occasionally dress up in monster costumes and let the villagers see them! The elders are all convinced that they are doing the right thing and that their actions are justified to preserve their community and protect their kin from the evils that lie beyond it.

For me, The Village is a parable for the whole world and the human condition. We are trapped like they are, on our planet and our 3D-linear time plain. We are kept in our little illusory Umwelt in the same way as the villagers, through deliberately-engineered ignorance and fear. The elders are an allegory of the Illuminati, people who know the truth and keep it from us to control us. Like the elders, some of those in the lower degrees of initiation are truly motivated by kindness. They believe that it is necessary to keep us in this box for our own good. I don’t agree at all and I think that this rear-echelon of the Illuminati is in turn manipulated by the higher degrees who have a totally different objective: The creation of the New World Order. They control us not for our interests, but for theirs.

Like Ivy in the film, we can escape. She signifies the emerging spirit of human freedom that is rising in society today. Named after a plant that can climb walls, she climbed over the fence surrounding the sanitized enclosure and into the world beyond. We too can climb the fence to freedom if we reject the control that keeps us in our Umwelt. We’re seeing more and more films on this recurring theme: Someone lives in a fake world without knowing it; they discover that their world is really a sham and then escape into the real world. This is the plot behind The Matrix, Dark City and The Truman Show which I’ve written about before. It’s encouraging that mainstream cinema is coming out with stories like this.

That's the spirit Ben, thanks for writing this, just what I needed to hear today.
I love the movie Dark City, it strikes a deep chord within me.

Glad to have helped, WW. "Dark City" is very good, yes. Very resonant with my experiences too. If you've not seen "The Village" or the other films I list in the article they're well worth watching. I think you'd probably like them.