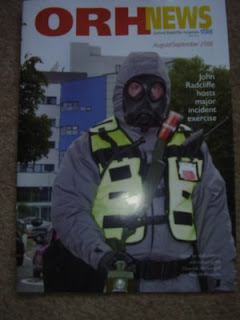 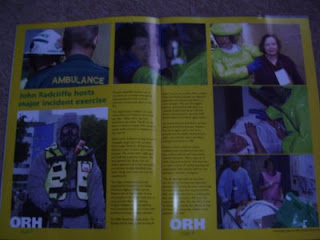 When I first spotted the front cover of the ORH News, the free newspaper for the Oxford Radcliffe Hospitals NHS Trust, it pulled me up short in my tracks! I found myself face-to-face with a huge cover picture of an emergency services operative dressed in a full army-style NBC (Nuclear, Biological and Chemical) warfare suit! My first thought was: “Why? Is the John Radcliffe Hospital hosting a special screening of V for Vendetta?” Then I read the article and remembered. A few weeks earlier we’d been told that there would be a full-scale major incident drill. We’ve had major incident drills before and they’re great fun actually; they usually involve a scenario of a massive M40 motorway pile-up or a shopping centre fire and/or collapse in town. Some of us get to play injured patients and we put on dressings, fake blood and burns; we can shout, moan and scream abuse at the staff as if we’re in real pain! What a hoot, especially if someone you don’t like very much is taking part too! But major incident drills in these post 9/11 years are different.

The drill was given a military-sounding name: Exercise Orpheus. It was organized by the HPA (Health Protection Agency- There’s an Orwellian name for you!) The government drills one general hospital in the region per year to carry out this kind of reality-training. The Division A (Medical) Director of Operations, Moira Logie said: “It was very realistic… the actors were really good and it felt like a genuine incident. Exercise Orpheus tested our logistical, organizational and personal skills in a crisis situation… how staff would respond to a nerve agent attack”. It began at 7AM and the scenario was prepared in secret. The operational crews were given no foreknowledge about what the situation would be. The police, fire and ambulance services were all involved and they practiced their techniques of washing and decontaminating patients before delivering them to the hospital ED (Emergency Department) for treatment.

I can guess the response this edition of the ORH News engendered in its readers: “Isn’t it wonderful to see these brave and dedicated life-savers at work? How great our government is for taking steps to protect us from this threat. These evil terrorists are lurking around every corner! They may even live next door to you! They could strike anywhere at any time! But your government is there to save you! These idiots who complain about giving up their civil liberties had better explain themselves to the people who die in agony from poisoned gas and radioactive shrapnel!”

Or as Adolf Hitler put it to justify setting up the Gestapo: “An evil exists that threatens every man-woman and child of this great nation. We must take steps to ensure our domestic and foreign safety and security.” How interesting that this Exercise Orpheus took place almost at exactly the same time that Spooks- Code 9 was first screened by the BBC; which I wrote about at the time here: http://hpanwo.blogspot.com/2008/08/spooks-code-9.html . As I've said before, I believe less and less in coincidence with every passing day. At the end Moira says something very significant: “We hope this reassures the public that the NHS would be able to handle the effects of what we hope is an extremely unlikely event.” But the people who will read this also watch the news on TV, where the government tells us again and again that it is not extremely unlikely, but actually highly likely! They are breeding fear of terrorism deliberately to make themselves more look more important to us and make us feel dependant on them. See the quote from Adam Curtis’ film in the linked Spooks article above! These terrorist attacks are nothing to do with Islamic extremism; at least the worst ones in recent years aren’t! They are black-budget military operations organized by the very government that then preaches endlessly about the “terrorist threat”. Hitler made that quote in 1933 after an arsonist destroyed the Reichstag, Germany's parliament building. The culprit was said to be the Dutch communist Marinus van Lubbe. But it was it? Today even the Encyclopaedia Britannica admits that the Nazi’s probably lit that fire themselves to gain public support for their oppressive regime, a regime that the people would otherwise have vehemently rejected. If a scam keeps working, why not keep using it? It’s interesting that in the movie V for Vendetta, which the cover image of the paper first reminded me of, the Norse-Fire fascist regime of Adam Sutler was voted into power by people afraid of terrorist strikes that Norse-Fire itself had perpetrated.

I actually agree with one part of that article's theme: I do admire the brave and dedicated life-savers of the emergency services and (modesty-go to Hell!) I am a part of that. Even if massive terrorist incidents are false-flag government operations, and not the work of the non-existent Al-Qaida, they still kill and injure people. Those people will need to be saved and treated no matter who did it. If you’re burned, poisoned or trapped under rubble, it makes little difference what caused your predicament; all that matters to you is that someone helps you as soon and effectively as possible! So I am in no way suggesting that terrorist incident exercises should not take place! I’ll happily take part in one myself when it’s the Porters’ turn to join in. What I am objecting to is that the governments are using these activities as propaganda. “Thank God we’ve got the Fuhrer to protect us!”

The ORH News is available to read online here; make sure you have FlashPlayer installed: http://edition.pagesuite-professional.co.uk/Launch.aspx?referral=other&pnum=&refresh=k03M19Kf6As0&EID=d613a878-76b1-4ea2-86fa-d2ff42ca838b&skip=true .
Posted by Ben Emlyn-Jones at 10:09

BlueHost is definitely one of the best hosting provider with plans for all of your hosting needs.