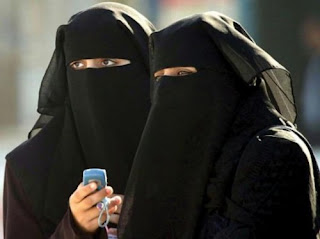 President of France, Nicholas Sarkozy, has put forward plans to prevent Muslim women wearing the Burqa, a long dress with full sleeves, a hood and veil that completely covers the body of the wearer except for their hands and eyes. Other countries may follow suit, like the Netherlands: http://news.bbc.co.uk/1/hi/world/europe/6159046.stm . Here’s a debate between a former Mayor of London, Ken Livingstone MP, and the French philosopher (France has plenty of them!) Bernard-Henri Levy: http://news.bbc.co.uk/1/hi/programmes/newsnight/8118735.stm . The justification for the ban is that the Burqa is seen by some as a form of imprisonment, like a shackle or pillory, designed to oppress women and keep them in their “proper place” as inferiors to men. In several countries ruled by Muslim theocracies, Saudi Arabia for instance, women are forced by law to wear them and can be publicly birched for flouting that law. The anti-Burqa campaigners like Sarkozy quite rightly oppose such brutality. However the country that has gone furthest and passed into law an actual ban it is Turkey, and in doing so it revealed something important: Most women in Turkey wear the Burqa out of their own free choice and they took to the streets to protest. They didn’t take kindly to the government patronizing them! Nor do I.

Here in Britain, the idea of a Burqa ban is also controversial, but often for different reasons it seems. It’s simply seen more as a patriotic matter. Native British culture is supposedly at risk of being smothered by Muslim immigration and the ban is a drive to keep un-British practices out of Britain. See this debate on Question Time: http://www.youtube.com/watch?v=7u5uEvuBY1c . As I’ve said many times and need hardly reiterate, we need to be wary that this issue will not be used to harness us to another Divide-and-Rule scam;
see here for background: http://hpanwo.blogspot.com/2009/04/snob-walls.html and http://hpanwo.blogspot.com/2008/11/british-national-party.html . It’s strange that none of the people who campaign against the Burqa seem to know anything about its real origins and what it truly symbolizes. Firstly, contrary to popular belief, it’s not a part of traditional Islam… you heard me right! There’s one big myth shattered! It is not mentioned in the Koran at all and was not worn by any Muslims for the first thousand years after Mohammed’s life. The Koran talks about how God wants us all to dress modestly, but this means just long trousers or skirts not a complete body covering. What’s more this commandment applied equally to both genders and there were no exceptional provisions for women. The Burqa was actually invented in the 16th Century by the Caliphs of Baghdad and was designed to shield the bodies of the Caliph and his family from the envious and resentful eyes of their “social inferiors” on the city streets. Therefore, far from being a stigma, a brand of submission and humiliation, the Burqa is really a status-symbol of nobility! And also, believe it or not, it was intended to be worn by both men and women! The Caliph and his sons wore it as well as his wives and daughters. Therefore technically I could wear one if I wanted to. Do you think it would suit me?

Actually I’m not going to wear a Burqa. I choose not to, but I would resent having that choice taken out of my hands by President Sarkozy and others. I agree with those Turkish women; it is patronizing! We constantly have laws imposed on us and things barred from us with the reassuring platitude: “it’s for your own good”. I’m banned from smoking in my hospital, even in the open air in the middle of our 5-acre sports ground! The fact that I’ve chosen not to smoke is irrelevant to the fact that now that choice has been taken away from me. We hear all the time about Orwellian laws being imposed on us to “protect us from Terrorism” when the only terrorists out there that are a serious threat to us are the same governments who claim that they are protecting us (Unless any HPANWO-readers are so naïve that they still believe that 19 men with plastic knives and forks, or something like that, can hijack a plane, beat laser and infra red-toting satellites and polarized radar, to crash the planes into buildings which then conveniently fold up like an origami model!). This reminds me of the hoody ban of 2005. That was just in private places like shopping centres, but this new Burka ban is going to apply to public areas as well. The French government wants to dictate our dress codes on the Taxpayers' public streets! Obviously some people in other countries want to do the same thing. Where will it end? What if President Sarkozy decides he doesn't like silver leggings with sequins on them; will he ban those to? We might end up in a situation like in Aldous Huxley's prescient 1930 sci-fi novel Brave New World where everybody is genetically modified and has to wear colour-coded uniforms to display their place in society. So the answer to the question in the title of this article is definitely “No”; we should not ban the Burqa.
(Latest HPANWO Voice articles: http://hpanwo-voice.blogspot.com/2009/07/letter-to-abel-and-cole.html
and http://hpanwo-voice.blogspot.com/2009/07/alien-spotted-by-policeman-near-silbury.html )
Posted by Ben Emlyn-Jones at 10:39

having lived in Jordan many women do like the Burqa as it stops men from ogling them.
The Koran seems to take these human nature foibles on and designs 'laws' to deal with them.
We know men often 'have a gander' [ fair enough as long as it doesn't become that 'look at the tits on that' style of 'oppression.

In Jordan both men and women have their 'place' and both had better get on with it.
I feel a lifting on punishment for not wearing it = a step forward.
Jewish women wear wigs often to deal with covering their head and many Christians wear headscarfs.

Respectfully a man of Jewish heritage putting laws on the Moslems in France, while he flirts around with various super-models , cheats on his wife - bound to enflame, and doubtless its meant to.

All the way with Sar Ko Zay

Hi aferrismoon. I hope you're right about people being enflamed, although unfortunately we're so accustomed to hypocrite politicians that the French public may have built up a tolerence.

A Muslim woman at work tolds me that she used to wear a Burqa and she says that they're very comfortable to wear. I imagine that they'd be quite hot and stuffy, but she says they're very cool. They keep the sun off direct contact with the skin and allow air to flow freely inside. The hot air rises out through the top and drags cooler air in through the bottom of the skirt. In fact I see that the Burqa is not unlike the robes of the Beduin and Tuareg people of North Africa who are experts at desert survival.

Interesting idea about wedding dresses. Nobody can call a bride at an English white wedding oppressed and dowtrodden! Far from it, she has this aura of sexual potential; that's the idea! I wonder what the origins are of these Western nuptial traditions.

What's more I also must say I don't think the Burqa makes women look unattractive. Far from it, it highlights those lovely dark, liquid oriental eyes of theirs.

I've heard that the ritual mutilation of girls' genitals goes on in some of the closed Muslim communities of Britain and France. This terrible practice is not unique to socieities with Islam as its dominent religion. Isn't that a more pressing issue to tackle than a few square feet of black cloth?

I wondered why they wore black too, which i assumed would be very hot, but obviously it works.

I saw a group of Moslem girls here in Prague and some had headscarves , others didn't. The girls with headscarves looked like they enjoyed putting together their outfit - ok they weren't full burqas.
Anyhow the example for me was their, the moslems will get on with in their own good time
At least they don't have the worst tourist in the world , which is apparently symbolic of Brit democracy.

Female circumcision seems a lot more opppressive than male circumcision, and I don't know many people who could support that, even if it meant changing someone elses law.
As most moslems don't practice I wonder how much of it is local law mixed with interpretations of Koran

"Female circumsision" really is a euphemism; yes it is far more oppressive. With boys all they do is cut the flap of skin off at the top of their penises, but with girls it's totally destroying the whole vulva; it's much more like castration.

Yeah, I'm all in favour of equality, BUT EQUALITY MEANS EQUAL. Women have been almost universally oppressed in the past and this is what is always quoted when a man complains that he is being discriminated against. But for me that is all the more reason to END discrimination now, not to perpetuate it. You can't fight injustice by trying to cancel it out with another injustice. All you get it twice the injustice, twice the resentment and twice the anger, and the cycle of oppresssion and counter-repression continues.

The burqa should be banned because it demoralises women. It is worn in countries like Saudi Arabia where women are under the jurisdiction of men. In these strict muslim countries women have few rights, they can not go out unless they are accompanied by men; also polygamy is often practised which is even more demeaning for women, there is no excuse for this behaviour because there are more men than women in these countries.
There is no place in the Koran that says that a woman should completely cover herself. The burqa is there to control women and to belittle them.
Ken Livingstone talks a lot of rot as always horrible ugly little man, on News Night, good on Sarkozy!

Well, Mel,you'd better tell that to the women of Turkey, because the govt stepped in to recuse the "poor. downtrodden, helpless and pitiful" women there and they said "No, don't patronize us!". In extremeist Muslim countries like Saudi Arabis and Iran men are forced to grow beards. Does this mean we should pass laws in Britain and France forcing men to shave every day?

Mel, why don't you join the HPANWO Forum?

The dude is absolutely right, and there is no question.