I Now KNOW Who The Illuminati Are! 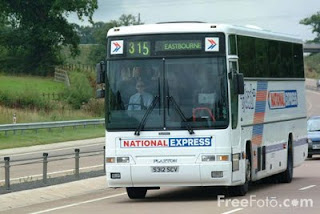 Yes, I have finally solved the mystery once and for all. I have irrefutable proof of the identity of the Illuminati! People have been asking for years: “Is it the Bilderbergers?” “Is it the Skull-and-Bones?” “Is it the Masons?“ etc etc. Well it’s none of them. The Illuminati are National Express. It’s true! The Antichrist doesn’t sit in the capstone of a pyramid in a sub-basement of Area 51… He can be found in the driving seat of a white coach.

This revelation came to me from an experience I had last week. I was on a National Express coach on a long distance no-change journey from Oxford to Nottingham. I intensely dislike travelling by coach and I normally pay the extra £10 and get the train, but I wanted to use up some surplus return train tickets I had. Anyway just after leaving Oxford I got up to go to the little toilet cubicle at the back to relieve myself of the cup of coffee, spring water and orange juice I had in Cafe Nero before boarding, and to my horror the door to the coach bog was locked and there was an "OUT OF ORDER" sign on it. That's it! No apology no alternative recommendations; nothing! "What shall I do?" I asked myself. The journey was almost 5 hours with no toilet! I looked around myself. How would my fellow passengers cope? Could I follow their lead? What if I was the only one suffering? It made me realize that because I’d booked my ticket in advance, the Illuminati, knew which coach I’d be on and so purposefully sabotaged the toilet as part of their campaign against me.

My first thought was to ask the driver if I could quickly go to the toilet at the various places we stopped at, but I didn't trust him not to drive away and leave me behind. National Express have a notorious reputation for that kind of cock-up as well as being... generally crap in every other respect! So there was only one thing for it. I'd have to make alternative washroom arrangements... on the coach! Luckily every seat on the coach was supplied with a plastic bag for rubbish and I was relieved to see that it had no air-holes in it. The next problem was how to actually use the bag for the impromptu purpose for which I'd designated it. If I'd had a quiet corner seat at the back I could just have kneeled on the floor behind the seat in front, but I was in the centre of the cabin right next to a very prim-looking middle-aged woman. I stealthily draped my jumper over my lap and equally stealthy picked up the rubbish bag, trying not to make it rustle. Over the course of the next 10 minutes I moved it closer and closer to my waistline, pausing every time the woman turned a page on her paper. I eventually managed to slip the bag under the jumper covering and inside my trousers. The problem then was how to fit it over the end of my willy, in a way that I could piss into it cleanly, with just one hand. If I shoved both hands inside my trousers then my attempt at discretion would be blown. I realized that it would be much easier if I had a slight erection so I tried to think of lustful thoughts, but it didn't work. I was too nervous and self conscious. I let fly with a few "test drops" but they sponged straight into my trousers. So I had to abandon that plan.

Then I had another brainwave. I shoved half of the jumper itself inside my trousers. Once again I had to do this very slowly and carefully, keeping the other half of my jumper disguising what I was doing as it had before. Once I achieved this and manoeuvred the scrunched up jumper into the best position, I opened the floodgates. Warm wetness soaked into the jumper and I felt the pressure on my bladder blissfully easing. Mission accomplished! But then I had two further problems to contend with, and no way to go back! My jumper... overflowed slightly, into my trousers and the seat cushion! Also, how was I to get it out of my trousers discreetly? I waited until the woman had shifted in her seat and the young bloke in the seat behind me was asleep then I just whipped it out and bundled it into the rubbish bag. I tied it up and hoped that the smell wasn't too bad and that the wet patch on my trousers wasn't too prominent. The women beside me wrinkled her nose a bit, but then to my relief she glanced behind her at the sleeping man! The girl in the seat in front of me kept looking at me though! Unfortunately a bit later I could no longer pretend that the stench of urine was not wafting away from me in concentric circles. "God, let this journey be over soon!" I prayed. "Let there be no traffic jams!"

When I finally alighted from the coach in Nottingham I went to the bus station stop and bought a small toy model of a National Express coach. Then I made a pentacle on the ground with salt and burned it as an effigy. I hope that my virulent curse reaches every corner of the National Express organization. Hopefully even the company’s director will break out in boils.

I didn't know it but the interest in the Illuminati and the assertions that it exists today began after the publication of The Illuminatus, it was a nice production, and to many people read it, even twice... there are to many information about it but, what about the sources?

It will not work in fact, that is exactly what I think.

I don't even understand your story.

What's up it's me, I am also visiting this web site daily, this website is in
fact fastidious and the users are really sharing fastidious thoughts.


Here is my webpage; Abercrombie & Fitch

I think this is among the most vital info for me. And
i am glad reading your article. But want to remark on few general things, The web
site style is perfect, the articles is really great :
D. Good job, cheers

This is my first time pay a quick visit at here and i am genuinely happy to read everthing at
one place.

What a information of un-ambiguity and preserveness of valuable know-how concerning unpredicted
emotions.

Wonderful work! That is the type of info that are meant to be
shared around the net. Disgrace on Google for not positioning this put up
upper! Come on over and talk over with my web site .

Have a look at my web site :: Gafas聽Oakley Baratas

Greetings! Very helpful advice in this particular article!
It's the little changes that make the largest changes. Thanks a lot for sharing!

This post offers clear idea in support of the new people of blogging, that
actually how to do blogging.

First off I want to say excellent blog! I had a quick question which I'd like to ask if you don't mind.
I was curious to find out how you center yourself and
clear your head prior to writing. I've had difficulty clearing my thoughts in getting my ideas out. I truly do take pleasure in writing however it just seems like the first 10 to 15 minutes are wasted simply just trying to figure out how to begin. Any recommendations or tips? Thanks!

My brother suggested I would possibly like this website.
He used to be totally right. This submit actually
made my day. You cann't consider simply how so much time I had spent for this info! Thank you!

It's difficult to find educated people in this particular topic, however, you sound like you know what you're
talking about! Thanks

Your way of describing everything in this paragraph is actually pleasant, every one can easily know it,
Thanks a lot.

Hello, Neat post. There's an issue with your site in web explorer, would test this? IE nonetheless is the marketplace leader and a big component to other folks will omit your magnificent writing because of this problem.

Feel free to surf to my web-site :: source

Amazing! This blog looks exactly like my old one!
It's on a completely different topic but it has pretty much the same layout and design. Superb choice of colors!

It's the best time to make some plans for the future and it is time to be happy. I've read this post
and if I could I desire to suggest you some interesting things or suggestions.
Maybe you could write next articles referring to
this article. I want to read more things about it!

Hi there! This post couldn't be written any better! Reading this post reminds me of my old room mate! He always kept talking about this. I will forward this write-up to him. Fairly certain he will have a good read. Thank you for sharing!

I believe that is among the so much significant info for
me. And i'm glad studying your article. But want to statement on few common issues, The site style is great, the articles is really excellent : D. Just right process, cheers

There's definately a great deal to know about this topic. I really like all the points you have made.

I don't even know how I ended up here, but I thought this post was good. I don't know who
you are but definitely you're going to a famous blogger if you are not already ;) Cheers!

Did you know you can create short urls with Shortest and get dollars from every click on your shortened urls.

If you need your ex-girlfriend or ex-boyfriend to come crawling back to you on their knees (no matter why you broke up) you got to watch this video
right away...

(VIDEO) Why your ex will NEVER get back...