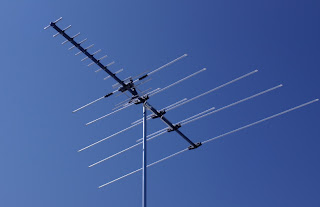 Digital TV is spreading around the UK, and the world. In a few areas, the networks have already switched off the old analogue signal. This is a concern for me, not just for old folk and others who can't adapt to the new system, but for us all. This is for a resaon that nobody in the mainstream press has so far addressed: It takes control of what you watch out of your hands and into the hands of the network owners.

In the old days TV sets were independent machines which simply picked up radio waves and turned them into pictures and sound. The TV station simply broadcast and the TV receiver simply picked up; it was free and totally unregulated. It was also unmonitored and impossible for the station to know whether or not you were watching them. The controls for each individual TV set were completely in the hands of the independant user. Not any more. Now the TV sets' functioning is part of a network that is centrally controlled. Each channel has to be decoded before you own set can pick it up and the decoding system is controlled by the broadcasting station, not the set's owner! With digital, the station itself decides what, when and whether you watch because your own TV set, that you buy with your own money, is part of this computerized network linked though the digibox on top of your set. There are fundamental implications here for media freedom.

I'll give you an example. In my novel Rockall, the island's population has declared itself an independent nation and has been attacked by the military. They've set up a blockade of naval ships and, as it turns out, an electronic blockade:

An extract from Rockall by Ben Emlyn-Jones

“There’s nothing I can do, Mum.” Kayleigh was holding back tears as she looked at her mother’s face on the laptop screen. Her father was standing behind her and in the background was the kitchen of her house in Glasgow.
“God, I wish you’d never got involved in all this!” came her mother's voice through the speakers.
“Well, I have. I can’t turn the clock back so I’ll just have to make the best of it.” She longed to be with them in her house on the other side of the screen.
“But, Kay… Isn’t there a boat you can jump into and just get the hell out?”
She shook her head. “The island’s being blockaded by the Navy. Nobody goes out or comes in alive.”
Her mother put a tissue to her mouth and sniffed; her father put a hand on her shoulder.
“Mum, I know you don’t believe everything you read in the papers, but…”
“It’s alright, Sweetie; we’re both just worried for you if it comes to fighting.”
“I’ll keep my head down and…” The screen suddenly went blank.
“Mum!... Dad!” She tapped the keyboard, but nothing happened. Then a message appeared on the screen: Error. Cellular modem connection terminated. Contact internet service provider for further advice. “Shit!... Dill!”At the moment she called his name he burst in through the door. “Kayleigh, are you cut off too?”
“Yeah.”
“They’ve struck us off the Net!”
(Rockall is now available free online here: http://hpanwo-bb.blogspot.com/2009/02/rockall-chapter-1.html
Posted by Ben Emlyn-Jones at 10:17

I am also concerned about the loss of free TV. This means you can't get any station without paying someone. Not to mention the ability to keep track of what you watch.

They can also track you and target you with specific commercials just for you. Don't we feel so lucky! LOL

Businesses want us to be exposed to advertising 24/7. (one might also say propaganda).