Who Really Runs The World? 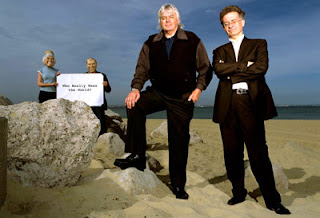 I was interviewed for this programme myself, but obviously I’ve been dropped onto the cutting-room floor! I got to know Tony Topping quite well when I met him at the Probe conference last March and this was when we both saw a UFO on the beach at Lytham St Annes which I describe in detail in my earlier article on October’s Probe conference. The Channel 4 film crew did a long shoot of Tony doing his address at the conference, but again most of this has not made it to the broadcast cut.

It was quite a good film to start with. They resist the temptation to which so many other mainstream TV producers on conspiracy theories have succumbed: Demonizing the conspiracy theorists because they think questioning 9/11 etc shows a heartless attitude to the survivors and their families, as if covering up for their mass murder shows them respect! The problem comes when they get to the segment on the 7/7 bombings. The theory Rachel North encountered is a new one on me! I’ve heard people talk about 7/7 as a black-budget government military operation, but never as a power surge cover-up! It’s absolutely incredulous that London Transport would attempt it and how they could get away with it. As for Mark Honingsbaum’s report: How can he criticize people for merely interpreting what he wrote about what he saw on the day, as an immediate, unpolluted impression? Once the official version of events is in place he wishes he hadn’t written it? That sounds a bit like someone trying to alter a conclusion because it retrospectively challenges the conventional view. It’s bad journalism to use such a fallacy.

Chris French is a familiar face to anyone involved in paranormal or conspiratological research. He’s an arch-Skeptic, Britain’s James Randi. It looks as though the experiment was conducted fairly (although the people should have been interviewed on their own to eliminate peer-pressure) and I’m glad he and his colleague Patrick Leman are not trying to make a statement about whether conspiracy theories are true or false (at least not openly; I’m sure that’s what they’re insinuating!) But they still seem to portray belief in conspiracy theory as something pathological. The low-scoring group was the “sensible and well-adjusted” ones. I notice that for that group they were just asked for a show of hands, not the theatrics of holding their mobile phones up! I could just as easily say that the skeptical group’s tendencies were pathological: The child-like trust, the groundless belief, the faith in the benevolence of authorities. The way these two groups can be viewed is not absolute. It is dependant on how establishment your viewpoint is.

The film includes some humourous touches. The masks and faces on sticks were a bit tongue-in-cheek, but others were very stylish. I rather enjoyed the bit where Chris French visited David Icke. It was filmed to look like a Wild West showdown! And I think David was much faster on the draw! He really shows Chris French up for what he is: a peddler of butresses for the Conformist paradigm. (I'll have more to say on Chris French's TV shows later).

It’s encouraging that in some cases the conspiracy theories of significant events are more popular than the official ones. The programme doesn’t mention that the amount of people who think President John F Kennedy was assassinated by a government plot outnumber those who think it was the sole work of Lee Harvey Oswald, the proverbial "lone nut"; and this statistic endures to this day. I’m very glad that conspiratorial thinking is at an all-time high. The government and corporate authorities have enjoyed their monopoly on the prevailing paradigm for too long; it’s about bloody time the tide turned the other way.
Posted by Ben Emlyn-Jones at 17:17